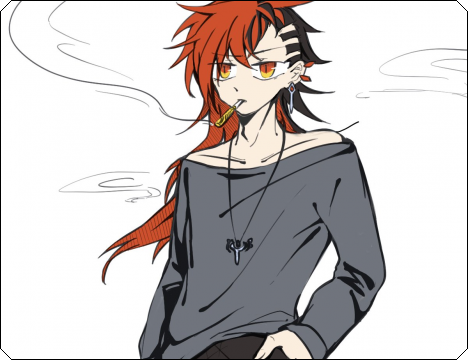 Shen stared at the entrance to what appeared like a temple, rough stone architecture carved into the side of this particular mountain among many in this range. The snow, although light, was present, and he could feel the cold of the Phoenix Mountains in his bones, pulling the black wool scarf around his neck a little tighter as he approached cautiously and wide-eyed. Was this really an official Rune Knight institution? Well, he'd been ordered here after they found out that he still couldn't use or control any magic, but ... what was this supposed to be? He'd thought of a training area in the HQ when he'd initially received his order to meet an instructor for training, or maybe even in Era itself at the most. It would make sense, right? Never would he have thought that he'd have to travel all the way to the Phoenix Mountains, by train, by wagon, and by foot. He had no fancy magic to transport him across time and space ... or any spare cash to pay for a better mode of transportation. The Rune Knights, of course, paid him a salary, but he was still nothing but a lowly recruit. After months, he had yet to make it to anything. His thoughts would instinctively trail off to his sister, who, despite joining a while after him, had already become an investigator. He felt a twinge of disappointment and jealousy. Disappointment in himself over the fact that, in everything he did, whether it be magic or what had effectively become his job, he was a failure. Jealousy over the fact that Lilith innately seemed to be so much better at everything he attempted to do, seemingly without even trying. He pushed those thoughts aside. It was his fault and his fault alone. After all, that was why he was here now.

Shen took a breath and stepped forward, and continued to do so, suddenly feeling a lot more determined to traverse into the darkness that awaited in a wide hallway ahead that would lead deeper into the mountain, this same determination quickly reducing in intensity once he'd been submerged in the shadows as the entrance to the temple became a distant light in the other direction. He contemplated turning back now, though, it would seem that fate had other plans. In a flash of magic, torches to both his left and right suddenly lit up, bathing him and the hallway in an orange glow, rows and rows of them continuing to set themselves alight along the walls, leading deeper into the temple itself. "Ah!", the Rune Knight recruit recoiled back instinctively, obviously startled by the sudden display of the arcane, freezing in place and continuing to stare down the hallway with wide, fearful eyes for seconds upon seconds, and ultimately, a minute. He gradually relaxed after the initial shock had passed, though this place gave him the creeps, in more than just one way. Was this place actually legit? It still wasn't too late to turn back, right? That was exactly what Shen would do. He spun on his heel. To hell with it. He'd figure magic out somehow, without getting lost in some run-down ruin.

Shen would freeze once more, his head slowly turning around. The voice had rung out loud and clear, though it had sounded like a whisper that echoed in his ears, his mind directly. The young Rune Knight recruit paled. What the fuuuuck?". So yeah, he was pretty sure this was how he would die. Some creepy-ass demon that spoke to his mind in some old temple was gonna eat his soul, or something along those lines. Was there even any point in trying to run away now? The voice would ring out once more. "Do not be afraid. I will not hurt you". Oh shit. Could the thing read his mind? He took a deep breath, swallowing the immediate feelings that prompted him to sprint for the exit. Instead, he would turn back to the hallway, somewhat motivated by the more gentle words that had reached him, though that, of course, would be no guarantee at all. Well, if he died, at least that would be it. No more worries.

It did not take him long to reach a larger chamber, no, a large, domed hall that stretched far into all directions, daylight falling in from a circular opening in the roof of the structure, a circular pond of some sort located underneath in the chamber's midst. It was cold here, too, which was to be expected with the chamber being essentially open to the elements, though that was the least of Shen's worries. Indeed, he was too taken aback by the sight, though also kept his caution alive, quick, nervous glances shot around. Nothing to be seen. At least, at first.

With a gust of wind, a creature would suddenly appear before him, descending from somewhere up above in the chamber, Shen raising his arm to shield his eyes from the dust and dirt thrown up by the sudden movement, his eyes widening in shock when he lowered it once more. A massive owl of near monstrous proportions stood before him, his mouth falling agape as he found himself shocked once more. "Surprised, child? I suppose it is not what you expected". Shen stumbled back a few steps, though caught himself, still, rendered speechless by the sudden appearance. "You have been sent here for a reason, have you not?", the avian would cock its massive head, the beak opening slightly, the voice ringing out once more. "I- I- uhhm ...", the recruit stuttered out. "Do not worry. I need no answer. I can see it in your heart". "M-my h-heart?", Shen would ask quite bluntly. The creature would cock its head once more, though the tone would shift, appearing slightly amused. "Indeed. You're here to learn about magic, though, it is a problematic topic for you, I sense". Shen didn't really know what to say. This was all more than just a little overwhelming. Despite this, he could've sworn the massive avian sported a smile.

"It seems you hold a few misconceptions about yourself and your magic. Very well, we have a lot of work ahead of us. Let us begin to fix this problem without any further delay".