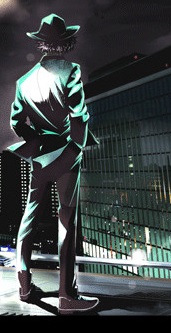 "Hmph. Another easy task, as it looks."

"They say I need to get creative... interesting."

Knievel walked around the city in his human persona, while reading a sheet of paper he retrieved from his guild. The job had the following description; to slander a certain cheater, who went to have relationships with other people while having a loved one waiting for him. For one, the mage didn't really care about the implications, as this act is one of the many things that drive his interest in humans. Selfishness is the word.

After one hour of strolling on the streets, he already found his target.

What a hell are you doing, you bastard-

Reacting quickly to his attempt at grabbing him, the target tries to evade. Knievel, in a quick move, drew the sword he held and used it to slash both of his legs, which drew the attention of the civilians around. One of them even dared to call the knights.

Should we call the Rune Knights?

In response, Knievel readily grabbed the cheater by his head and forced his face down into the concrete floor. Not only once. Twice, thrice. Blood flew, his nose dripping, and the free hand which Knievel had not used... went straight into his face as a punch.

"Should we tell what awful things you did? Driven by lust, you cheated on your loved one, had a child with both her and the mattress, and went to cheat again!"

No one had the guts to stop his senseless act of violence. It didn't involve them. They know who he is, what he did in the city before this unusual meeting. In a way, the act of this villain was more noble and heroic than many heroes; which, to be fair, were lies.

Knievel didn't care one bit. It was just a reason for him to do violence.

"A dark mage has more... dignity, when compared to trash like you."

He made sure to wield his sword once again and use the sharp tip to cut his clothes down, one by one, until they were turned into shreds. He only left him on his underwear. But, that wasn't enough. Knievel wanted more and more. With the blade, he drew the initial of his name across his back, some unspeakable words, the symbol of a random dark guild, and the following; Rune Knights Suck.

And to end it with style?

"To never have children from now on!"

He directed the sword towards his pelvic region, and with his full strength, pierced the man in his private area. A scream could be heard from the man as it happened.

The population was horrified at this act. Knievel, to finish what he saw as a display of his artistic finesse, kicked the man in the same area he pierced him with the sword, as he returns the item itself to its sheath. After that, he walked away from the area, as the civilians kept arriving at the scene. As a reminder, he didn't run from the law.

He just went to get his reward.