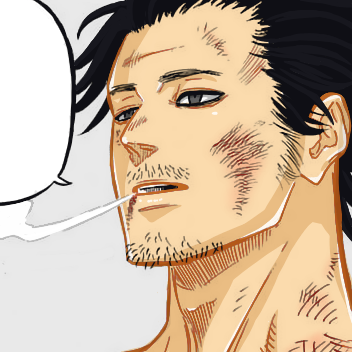 The sun was shining brightly down onto the peaceful town of Magnolia, and a cool breeze from the sea had welcomed itself in the peaceful town as a ship docked at its ports. The ship came from Joya, where Kaido was born and raised for most of his life, but he couldn’t call it home. Home was wherever you made it, and as soon as he could make it on his own, Kaido endlessly traveled the world. Now his thirst for adventure has brought him to the fantastical land of Fiorie, where he plotted to join a guild. It was just any guild that he wanted to join, nay, but the most infamous and renown guild of Fairy Tail.
For some reason, Kaido just felt like it would be a good fit for him, whereas, the other guilds weren’t. People moved out of his way as the hulking man made his way through his streets. Kaido stood about seven foot and carried with him a rather muscular frame, which made people intimidated of him. It also made traveling much easier, and for that reason, Kaido was able to easily make his way through the streets and to the location where he was told that Fairy Tail made their base of operations. Needless to say, Kaido was somewhat disappointed, he expected a much more extravagant building.
With ease Kaido pushed open the door, and entered into the  guild hall. He casually glanced around the building, absorbing the inside of the build and looking for a place to get a drink. To his left was a bar and a couple of tables directly in front of said bar, to the right was a business desk, and straight forward was way Kaido made out to be a training area; he raised an curious eyebrow and proceeded to turn left. He needed a drink before he discussed any form of business. Taking a seat at the bar, Kaido was tapped his fingers against the counter, and wave down the bar tender.
“Drink please.”

Behind the bar, stood perhaps the shortest member of Fairy Tail. She stood a couple inches shy of five feet at four foot something inches. Yet she was not intimidated by the giant like some Magnolia's citizens may have been outside of Fairy Tail's guild doors. The petite girl with pale blonde hair that nearly fell down just past her knees, offered the man a bright sparkling smile from behind the counter.

”Heyas! Welcome to Fairy Tail! Anything in particular to drink? Or you want me to surprise you?”

While the short little blonde might not have been intimidated by the hulking man who just entered, the smaller male already at the bar was. Percy was about a foot taller than Arcadia, but found himself equally dwarfed by the new guy as the younger girl was by him. This dude was so tall and so muscular. Percy's body was deceptively muscular and strong under his light turtle neck, but he knew no matter how fine-tuned his body was, it'd never be as well-defined at this.

With intimidation came admiration, though. The younger Dagger might be on the timid side due to the circumstances of his upbringing, but it was no secret that he dreamed of possessing enough power to be considered a viable force in his family. Strength oozed off the newcomer, and that only ignited his curiosity over whether said newcomer also possessed magic, or just raw strength. Percy had a hard time believing such an imposing guy would be magicless, but maybe that was his own bias since he viewed himself as inferior due to his own lack of magic power. A voice from behind the bar welcomed him to the guild bar, and question what drink he would specifically like to have. The giant male loomed over the counter and saw a really short petite girl with pale blonde hair, she nearly fell down on her knees as she offered a gentle smile from behind the bar table. “Oh my.” Kaido found himself saying, he expected someone a bit taller, this bartender looked like a child to him.“Hmmm, juice you say…..” Kaido would wave away his interest in the juice, “No thank you, I’m not a seven-year-old, or well not anymore. So please, your strongest beverage.” Seriously, Kaido was expecting the bartender to be older and taller. To him this stranger looked like a child, heck, for all he knew she may have been a child- but he doubted that they would allow a kid to handle the alcohol. He cocked an eyebrow upward when he noticed that she was not afraid of his intimidating frame, a small smirk formed across his lips and he stuffled a chuckle.
“Its nice to see that you aren’t one of the sheep outside!” he mused softly, “Can I please get that drink in a large mug?” While most people would think that being so tall was fun, Kaido found it nothing more than a curse. Mostly because, for one, in some situations he had to duck under doorways, fortunately for him, Fairy Tail had some pretty big doorways- so he didn’t need to duck as much. Kaido shifted uncomfortably in the bar stool, and then rubbed the back of his head tiredly. Hearing someone stamper out a hello, "Huh" Kaido would state before shifting a lazy gaze on another male that sat next to him. This male appeared slim, but what caught Kaido's mild interest was his two toned nature, namely his hair. That was odd indeed. But at last, Kaido didn't seem all that interested in conversation.
“Oh  sorry, I did not see you there, kid. Am I in your way?” He would question and shift to the best of his ability to give Percy some room. Kaido would turn his attention to the bartender, “I’m looking to join the guild, you wouldn’t know who I would have to go to talk about doing that, eh?”