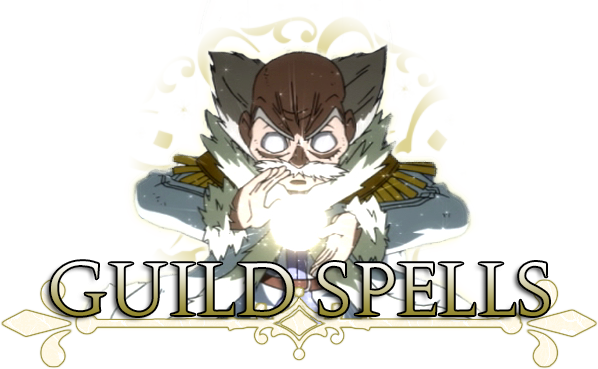 GUILD SPELLS
This is where you come to register guild spells. All of the information about guild spells are here


• A guild spell is H++ (an H+ spell that is 100% stronger).
• Aces have access to one spell, they must be S rank to learn it.
• A guild is allowed three guild spells for free, four more may be purchased after that from the shop.
• Use the spell template below, as always they can't be used until they are approved.
• Previous Guild Spell Registration thread can be found here.

by Janet Cinderfeild Yesterday at 11:12 am

Name: Deconstructing Touch
Rank: H++
MP Cost: 420 MP
Category: Offensive
Type: Single Target, DoT, Debuff, HP Drain, MP Drain, Immobilization
Damage: 315 HP per post
Range: Melee
Speed: Melee
Duration: 5 posts
Downside: Sacrificing range and speed for 50% more damage. Costs double base MP to cast in exchange for 50% stronger debuff
Description: The user of the spell mutters a short arcane incantation, their guild symbol beginning to glow in an eery, dark aura before eventually turning completely black. One of the user’s extremities is coated in an aura that embodies pure destruction, glistening with radiating, dark energy that appears almost like a black smoke. The user can touch an opponent within their melee range and at their own speed with this aura, the aura dissipating harmlessly should they miss. If they strike a target successfully, however, the spell will take hold, the affected target immediately experiencing a rush of pain throughout their whole body unlike anything they’ve ever felt before. The area where the spell touched them will turn black, their skin brittle, and their flesh rotten before disintegrating entirely. This spell, almost appearing like a particularly virulent infection, spreads further every post, dealing 315 HP in damage every post it is active, the magic sapping any and all strength from the affected opponent. They lose 5% of their HP and 5% of their MP every post this spell is active, suffer from a 345% debuff to their strength, and are immobilized by overwhelming pain on the first post of this spell.


Name: Elysium, Garden of Creation
Rank: H++
MP Cost: 420 MP
Category: Supportive
Type: Burst, Buff, HP regen, MP regen, Counter-Effect
Healing: 630 HP
Range: 1,000 m
Speed: 800 m/s
Duration: 25 posts
Downside: Costs double base MP to cast in exchange for 50% more healing
Description: Concentrating the essence of creation within their form, the caster’s guild mark begins to glow in a deeply warm, gentle aura. The user spreads their arms, an aura of golden light bursting outwards from their position, even transforming the terrain within the spell’s range. Flowers, grass, and trees will begin sprouting from every nook and cranny, no matter the user’s current location, and cover the area around the user entirely, transforming it into the fabled garden of Elysium, Paradise, a feeling of warmth and comfort filling every ally of the user within the range of the spell. As long as individuals the user considers allies remain within the garden, they heal 630 HP per post. Regardless of whether individuals stay within the garden or not, they can choose to receive a 230% increase to either their strength or their spell damage for the duration of the spell. They are additionally enveloped by a golden aura, the gentle and comforting warmth of the user’s will to protect and safeguard them regenerating both 5% of their MP and 5% of their HP once per post for the duration of the spell. Lastly, the user and every ally is blessed by Elysium’s boon, the wish to ensure that they remain strong and healthy, granting them a counter-effect to debuffs, which reduces the potency of every debuff placed upon an affected party by 50%.