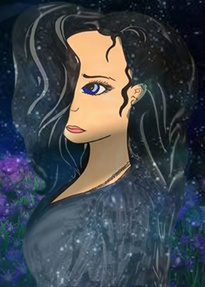 Magnolia has a population of over 60,000 inhabitants and is a merchant city that has been prosperous in Magic since the ancient era. The city itself was a lovely place that Luna had found herself in, people left and right as the city stretched beyond her vision. It was unique to her to be in such a bustling place. her pale slender fingers reached out to pull a loose strand of her long black hair that had found its way blocking her sight slightly irritate her. The sun was still high, not even noon as she paced through the town, the royal blue eyes of her scanned around, her clothing made sure that people would move out the way. She had come to the town via a boat, a rather large boat, no she didn't pay for a ticket and yes she was caught but she managed to lose the boat owner before reaching where she was.
Looking around she could see the people rushing to and from work, others then rushing to buy for their daily needs and then last, the children running about without a care in the world. she missed those days. she smiled gently to herself. stopping where she stood her head slowly tilted back to allow her to look up to the sky, bright blue with only a few clouds, the perfect opportunity for an artist. beyond the blue of the sky was birds. she stared peacefully up at them, seagulls, flying peacefully over her head until they were out of sight.
snapping back to reality she smiled gently to herself as she heard the busy chatter of the people and the wind brushing against the leaves of the trees, a soft rustle.
her cloak rested on her shoulders as her hood was up. she didn't have much on her apart from a nice looking stick she had found which was strapped to her back, digging in slightly. her feet pat the floor lightly and her hair bounced on her back under her cloak.
she stopped in her tracks, the smell of warm pastry filled her nose. she giggled.
Her black cloak done up fully, casting her face in shadow, the cloak itself reached to the floor, dragging slightly here and there, it was indeed old and ragged. she had no shoes, just bandages that wrapped around her foot and heel, slightly going up to her leg - this tucked in her overly baggy black harem trousers halfway up her leg as she had a belt hold them up the top. she then wore a long sleeve belly top, silvery purple she also had jewellery too but they were hidden within the shadow of her cloak.
she found herself in the centre of the town now, the busiest part. it was evidenced to be the busiest by the people that were around her, the stone path now smooth and cleaner and that there were so many people now surrounding her.
realizing where she was, panic began to wash over her. she hugged herself, her hands squeezing each arm as people began to bump her and barge past her to try and get past her. she began to do the same, running through the street at this point trying to find an ally way as she hyperventilated, tears welling up in her eyes. her haphephobia acting up very badly. she continued to push her way through the street, using her cloak to keep her hands safe from skin contact, that would have made it worse for her.
« View previous topic · View next topic »