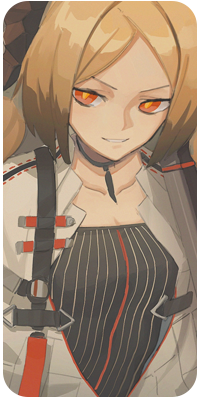 NEW DAWN,
Oh boy! Today was the day that Inphyy was waiting for, though in reality it could have been yesterday or even the day before that but she wanted to pace herself and be excited for once. Due to some trouble she had recently gotten into a couple of days ago, she began to realize that rocking solo wasn't really going to get her anywhere. Acquiring jobs was tougher, people didn't take her as seriously, all around it was just a situation that she didn't see herself sticking with for the long run. After some extensive research and general word of mouth, there was a guild that had peaked her interest that she ultimately wanted to join.

Which brings us to now, where Inphyy stood in front of the Fairy Tail guild hall. It's weird how not long ago these guys used to be the bee's knees and are now nothing more than your average guild, and she liked that. The building looked pretty normal and Magnolia was pretty normal as well, she noted as she made her way down the main street. Casually, she strolled up to the large oak doors, knocked couple times, waited a few seconds, and then let herself in. It was actually kind of cool, the inside of the building. Nothing like how she expected a guild hall to look, granted she entered with low expectation anyways. Inphyy turned towards the counter that looked like it would be a secretaries desk and asked, to nobody in particular, "Hi, I'm looking to join the guild. Do you know who I'd talk to or where I'd go for that....?"

Arcadia sat at her desk and rubbed her eyes. How far she had fallen behind on her paperwork. The barefoot slayer had been working at least four hours straight, and it did not feel ike she had made much a dent in her backlog. She could feel herself slowing down, so she decided it was a good time for a break and maybe a little snack.