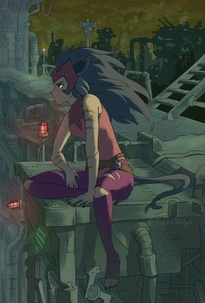 Luxi's shoes were vacant, as she stroked the nylon carpet that covered the entire facility. Her legs moved in a hastily motion as did her feet. She was careful not to accidentally hit her knee on the bottom of a furniture that aged well. Luxi used the wooden desk as a scratch post, when she was puzzled about the next word to add in the paper, which were greeted by the white lines that's being accompanied by words she previously wrote. What stopped her writing process, wasn't the comfortable cushion of the chair, that even a hard working farmer can easily rest on. It wasn't the obvious voices that her sensitive, close-set ears picked up. Even when she was trying to relax, despite having an uncomfortable looking posture that can cause her back pains in the distant future. Broke her concentration. The warmth was enough to put her to sleep, as her yellow and blue Heterochromic eyes, attempted to keep them open, like a pole being used to hult an enormous door to allow its escapees free. Luxi lazily got herself out of the warm, dusty brown chair as the legs slid along the grey nylon carpet.

She placed her tan fur hands, free from scars on her grimoire that took on grunge look. Closing the book, and placing it on her right side and the silver pen in the right pocket of her burgundy leggings. "I've wasted too much time in this friggin library" Luxi quietly said to herself, when her cautious black irises looked back of her, before turning her focus back to the wooden desk. She abandoned her work place, before dragging her body, feeling too drowsy to walk properly. The dimed out lights, and the quiet atmosphere made it feel unbearable for her creative flow to kick in. Luxi made enough effort to force to fling open the brown door that led to the outside world that made her eyes want to hiss at the sunlight. She placed the book around the belt area of the right side of her waist before stretching. Allowing her muscles to get a crack in, as her black 3 inch long nails slightly clinched the invisible air, before letting her arms back down.

Her tail that matched her brown scruffy hair, swayed in a calm motion, like the wind brushing a vacant swing back and forth. She was accompanied by several more people that left the library, yet she continued to stand still. "Now, what would be a purrfect thing to waste my time on" She asked herself before shifting her body towards the right. Luxi walked in short strides, and into the pool of busy mages that kept the town lively. However, before she kept going. Her nose picked up something delicate. The wonderful aroma made her ears perk up. She wanted to pinpoint the location of this scent, as she started to get on all fours as if she was a normal house pet. Relying on her instincts, she paved her way. The scent became more distinct, and started to remind her of the food that her old friend use to make, when she would forget to feed herself every time she finishes writing in her book. She consistently crawled to the source, until her head collided with someone's knee. This prompted her to stand back up in a normal, and more human way. She made it to the source, but she needed to get a few words out before dismissing the male figure who stood in her way. "You almost gave me a head injury, and you would have to pay for it---with your life" His back was turned, and she made a silent growl before she turned her attention to the food stand that she happened to crawl to.
_____________________________________________________________________________________
Primary Magic

Re: A Felines instinct

Kyran sat with books spread out around him. He was researching a variety of subjects at the same time. Summoning, sword techniques, martial arts other than Black Tiger, parenting, etc. He'd been working for hours. Each time a subject ran to the end of his interest, he changed subjects. All the while, his hand moved rapidly across a page. His brain simply functioned like that. Or perhaps, more precisely, he'd managed to teach it to function that way. When in complete harmony with the entities in his head, Kyran could absorb an amazing amount of information. He'd been working to expand its capabilities since becoming a dad. Being able to take care of the twins while writing or preparing for a meeting would be a godsend.

The redhead checked the time. "Is it that time already...?" He murmured, gathering his things. The VP shrugged back into his white vest. He'd taken it off for studying. His suit jacket was slung over his shoulder along with his bag. You should eat something, master Kyran. Your body will collapse if you keep going the way you have been. Eae reminded him. His stomach grumbled loudly to agree. The redhead groaned. He didn't have time to eat. There was paperwork, HR meetings, delegating tasks to leads, overviewing certain tasks within the company - all of which needed to be done before noon. At least that was how it felt. The company board at Dyer Industries happened to help take a lot of stress off his shoulders. He only had to come in once a week to review before leaving things up to them.

"Fine, I'll eat at the food stand nearby. That good enough?" Kyran grumbled. The redhead made his way outside. He'd stopped by the food stand a few times. Being always on the move made it hard to sit and eat. Grab and go helped keep him on his feet. This time, due to Eae's insistence, the VP was going to sit for his meal. He'd been about to sit when a girl rammed into his knee. Kyran turned to make sure his food didn't fall on the ground. It was a precarious dance to keep his food from the dirt. He would have let things go there if the girl hadn't threatened him.