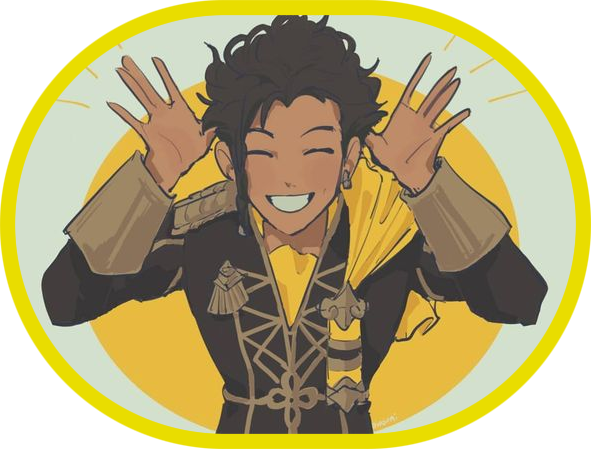 It was early in the morning just in time for the those out on patrol to come back to headquarters. A group of Rune Knights marched up the hill to the entrance of HQ. There were some banter and playful jokes bouncing about as if it was some sort verbal ping pong. Occasionally the group would burst into a loud laughter as one Knight would playfully shove one another. There were fair bit of teasing and roasting but it was clear it was all done out of good fun and camaraderie. In the center of the sizable group stood an individual far taller than the rest. All of the playful aura seemed to stem from that tall individual, his joking manner and warm attitude was inescapable. It was clearly evident as he was the one cracking the jokes, and kept the conversation moving. This individual wore the uniform of the Rune Knights but sported a golden cloak draped around his left shoulder. He had dark hair slick back with a single small braid off to the side. The individuals tan skin brought out the brilliant emerald sheen of his green eyes along with his brilliant smile.

"Honestly...I don't know if you're brave or just really... really stupid, Tam" Chuckled the Rune Knight, who seemed to be the captain of the squad. The group seemed to talk about the tail end of the story they were telling one another, it seemed to be about something that had happened rather recently. A few others laughed along as the poked fun at the tall individual.

"Pffft bravery? Maybe.... stupidity far from it my friend... I like to call it... thinking outside the box sir" Winked Tam, the tall young man. He shot forward akimbo finger guns as he playfully waggled his fingers at the Captain.

"Thinking out the box... you threw a live chicken at the thief's face...then proceeded to beat him into submission with a fish..." grinned the captain as the rest of the squad cracked up and began howling in laughter. Tam threw his head back and laughed as well.

"Hey! Come on guys... we caught him right?!" Tam shook his head trying to regain his composure. The rest of the squads laughter started to settle down.

”Anyway, good job Tam… this gonna be one hell of a report to write” said the captain as he gave Tam a pat on the shoulder.

Tam nodded at the captain in a humble manner acknowledging the captains praise. He looked at the group with and spoke with a serious tone. “Thank you captain… but I don’t deserve the praise…. I must give credit due to the one who really deserves this praise…. I could not have apprehended the culprit without the brave actions of lieutenant Mc.Chicken” Tam finished his statement. The squad fell silent for a second before bursting into laughter.

”Tam can you go and ask the girl what she needs from the Rune Knights? The rest and the squad and I will report the incident that happened today.” The Captain spoke in a more formal tone. Tam nodded and gave a salute as he and his squad parted ways.

Tam watched the jumpy girl turn tomato red just before she excused herself and hurried off to a nearby corner. While she was out of sight Tam raised one of his eyebrows in curiosity wondering if he had startled her. Soon enough Melody peeked her head out from the corner, but before Tam could even open his mouth to say something she retreated back to her corner once more. Eventually Melody made her way towards Tam apologizing. She said something along the lines that Tam looked like a character from a story she had read. Tam could see how one would be startled by seeing someone who looks so similar to a character from a book.

“Ah…a character? Hahaha me? I’m just an average guy... Buuuut if you say so... I guess I’m flattered… that is that character was a good guy right?” Tam inquired in a joking manner. His radiating smile revealed the dimples on his cheeks.

“Oh so you wanna join our ranks! Awesome, that means we’ll  be coworkers haha.” Tam laughed trying to lighten up the mood, he noticed that she was trembling slightly, he started to think perhaps she was feeling well. “Oh… the sash? Thanks it’s the traditional sash worn by the roya- erm…." Tam suddenly cut himself off mid sentence. There was a split second pause before he continued speaking as if nothing had happened. "It's... uhm... Worn by government officers of my country… haha ironically the color gold so happens to be the colors of the engineering corps here in the rune knights.” Tam beamed as straightened up a bit taking pride of the sash that hung on his shoulders. “You don’t gotta worry about fightin’ and all… there are specific branches that are less combat oriented.” Tam explained to Melody.

Tam took a step back at the, but sudden out lash from Melody, he noticed ears and a tail sprout form Melody's form. He thought on his actions for a moment and realized that perhaps what he just did was not of the social norm. He cursed himself for acting out of pure instinct, but before he could apologize for his error, her ears and tail that appeared moments ago vanished. She reverted to meek self, red face and all. Tam stood there bewildered and confused, yet his concern for the new recruit overpowered those other emotions. He took a deep breath and decided to speak up.

"Erm... sorry I Didn't mean to upset, I was just checking if you had a fever, It won't happen again, I promise... But I have to ask... are you okay? Do we need to take you to the infirmary? I can contact one of medics right now if you want." Tam inquired with a slight bit of worry in his eyes, however this time he made sure to stay a professional distance away from the recruit, lest he upset her once again. She suddenly began to fall over, Tam dashed forward and caught just in time before she could hit the floor. He would attempt to pick her up princess style. "Melody! Are you okay?" .

Tam noticed one of the Rune Knights in his division and called out to them to get their attention. "Hey! Call a medic!" The Rune knight nodded and quickly headed inside the building. Tam frantically looked around, unsure if he should just her to the medical bay. He tried to look inside  into the hall to see if any of his other Rune Knight companions would be able to lend assistance. His Jade green eyes scanned the area in hopes to see a glimpse of Doppo or Shane.

375 words || @Shane Stern @Melody S. Winter @Tamlin|| job info/job sign-up || yum YUM.
Casually walking down one of the hallways at HQ was redheaded man with a severe case of bedhead that he could do nothing about, and his fair-faced superior and friend, Sheldon Stern. But of them, while having very different personalities, seemed to complement one another and became good friends because of it.

It was Doppo's lunch break, and he was headed to no other place than the cafeteria himself. While Hilda gave him an amazing, irreplaceable gift that could feed him endless meals of his choosing, he valued it far too much to take it even down the street from his apartment somewhere in Era. As a result, he used it mostly at home and bought his meals otherwise. Unfortunately, however, it seemed that neither Sheldon nor Doppo would be able to get anything done as they'd walk past the front of the building where they could see what was immediately in front of them outside, where a young, fragile-looking girl was passed out on the ground. Tamlin was hovering over her, and some other Knights also seemed to witness this incident, spiraling away to find help. Doppo, after realizing what had happened, pushed his way past Knights loitering in front of him, stopping one who was running by just to get a brief summary of what happened.

". . .What happened? Do you know?" Doppo asked quietly, but urgently.

"Not the whole situation, sir. All we know is that Tamlin was speaking to her, and she just. . ."

". . .Mm," Doppo gave one of his reaffirming, sheepish grunts before continuing onward to the girl, "—alright. . ."

When Doppo was outside to confront the two, and most likely General Sheldon as well, he knelt over the unconscious girl with a particularly vexed expression, which was uncommon for a man as physically impassive as he was. He wasn't irritated at the girl, but more so Tamlin. He knew that medics had been called already, so he didn't bother asking him anything.

While Shane would normally make his way alone to the cafeteria and just eat with whoever was present at the time, there would often be days where he and Doppo would meet up for lunch, despite still eating at the cafeteria. Today was one of those days and as the two of them, neither of them especially talkative except while they were teasing each other, they were faced with a commotion when they turned into one of the hallways towards the cafeteria.

The hallway led to the front of the building, and when they entered the hallway, Shane’s expression hardened slightly as he looked at the source of the commotion. A young girl was passed out near the entrance, with Tamlin, one of his closer friends in the Rune Knights was standing over her, a look of alarm on his face. A few Rune Knights were circling them and some of them were hastily walking away from the scene, intending to call upon the medics in the headquarters to look at the girl.

The due got the overall gist of the scenario from one of the Rune Knights running to get the medic. Shane merely grinned when he finally understood what was happening and the two of them walked towards the girl and Tamlin. Doppo knelt over the girl and tried to wake her up. His movements were too quick and unexpected for Shane to stop him in time, dumbfoundedly watching the man splash water over the girl’s face.

Shane rolled his eyes at Doppo’s way of waking the girl up but it was too late anyway. Leaving him to wake the girl up, the Spec Ops General turned his attention to Tamlin instead, putting a hand on his shoulder to calm the boy down. The girl was going to be alright, so Shane decided to have a little fun with the younger Rune Knight.