Can't someone get a passport in peace? 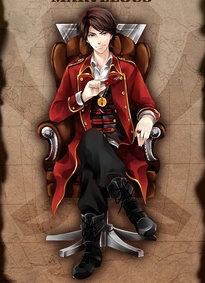 Can't someone get a passport in peace?

It was a rough day for the Pirate, he was in the midst of the port town of Hargeon. In his years of travel, he knew that Fiore mages had a reputation, and at the very least could work in other countries with the right documents. It was approaching noon, and the Pirate was standing in the midst of a long line, rubbing his eyes as he felt tired. Since the guild he joined, Fairy Tail, was under a guise, he felt it prudent that he should carry a backup strategy. It took several days and a handful of Jewels to change hands for Fantastico to find a dummy Guild, a Guild in name alone but helps those in need get a mage's passport, no questions asked. So with the false identity in place, all he needed to do was get the passport. He spent the majority of the morning behind a sweet elderly lady in front of him, and a hungover man behind him. In front of the elderly lady was a man just shorter then Fantastico, muttering and twitching.


The elderly lady spent most of the time chatting up Fantastico since Fantastico had stopped the lady from falling and seriously injuring herself earlier. He simply smiled and didn't want to be rude. He was a pirate, but he wasn't an arrogant bastard who disrespected everyone, like the man in front of the elderly lady who was often shouting to speed things up. The lines were going slow as the staff were undermanned and swamped on arguably one of the busiest days of the year. Eventually Fantastico found himself third in line as the clerk who just put down her sign saying that she'd be back later, however the man in front did not take it too kindly.

Everyone in line was there for at least an hour, the man burst forward towards the counter and grabbed the lady by the collar as she stood up. "You bitch! Don't you dare pull this after you made me wait for a full hour!" He punched the clerk in the throat before throwing her against the back wall. He proceeded to try and climb over the desk while almost everyone watching was stunned and scared, but the Pirate wasn't. Fantastico calmly walked up towards the man, he had his right leg on the desk. Fantastico grabbed the man's leg with both arms before lifting and tosing the man over his shoulder, causing him to hit the wall and he slid down landing on his head.

"We're all bored or hungry waiting, but that is no excuse to act like a ruffian to a poor lady who's been working as hard as she could." The pirate said loudly, showing off to everyone around. The man, groggily got onto his knees slowly before he lunged at the pirate, but Fantastico stepped out of the law causing him to slide right too the feet of the security guards, who proceeded to pick him up and throw him out of the building. Everyone cheered as he hit the pavement, Fantastico approached the desk as the clerk sat up in her chair, rubbing the bruise on her throat. Fantastico give her a smile "You are safe now, are you alright? I hope to heavens he didn't damage that beautiful voice of yours. I think you really should take a break to calm down.."

The clerk blushed, looking away for a moment. "I... I think I'm fine. Thank you... please, let me get to your passport first, the least I can do." She said, Fantastico smiled slightly and nodded. He provided the needed information, and in fifteen minutes he was walking out, looking at his picture on the passport for a moment, smirking, before putting away the item inside his coat. "Well, at the very least it wasn't boring."