Days since his return to Fiore, and Leo only now had the chance to relax and simply watch the guild grow from the sides. Lina at the door waved to her father who was on her way to school on this fine morning, and met it with a small bow  and wave of his own. Indeed it was one of the few moments he can relax and he was happy with it, and indeed it was good. It was this rare feeling that he longed for for it made him happy. As happy as he was when he would spend time with Lina. Now alone with his thoughts, he would recall the events that have transpired in the past few days. Meeting new people, hearing news of what happened to Fairy Tail. While all seemed to be happening very well in the time he had chosen to return, not all were merry-making times, and the occasional blood pumping battle for the thrill of it. There were indeed times of sadness, like the time he heard the news of Heero's fate. Heero was a close personal friend of Leo's despite them not seeing eye to eye most of the time. He was proud to see him grow up into a strong young man. For him to think about these people, made him show his age. He couldn't help but long for the companions he had before and he thought it a perfect opportunity to visit old friends, if they were still around that is. Chugging the last contents of his drink, he got up and decided to take a stroll around in Earthland looking for old friends. And pay his respects if they're gone.

Visiting the towns of where old guilds were was certainly not a walk in the park. Blue Pegasus, Lamia Scale, Eclipse Soul. All of them no longer exists and it was greatly depressing. All the allies... friends... loved ones... Gone. None of the people left in town was of any help either. Their answers to his questions were very vague.

"I don't know, maybe he's dead?"
"I heard he wandered off somewhere years ago."
"Wait, there was a guild here?"

That last line broke Leo's heart. It appears most no longer know of the heroes of old. The things, one can learn from them, those worthy of imitation, and those whose evil deeds that serve as basis for future decisions. He was sad to see them all go to waste. And just prayed that some were left to remember them, and not just Leonard Dragonbane hoping they would not be set aside as relics of a bygone time. Him and Sabertooth who were still alive and kicking though, which made him very much happy. He thought that at least, one guild remembers the olden heroes. But he never did go inside to check if they did. He just assumed so.

Now that his visit nears its end, he walked a very familiar path. A path that made him happy once before. A very lovely path it was back then, now no longer maintained, dusty, and cracked. This was the path towards an old Midi castle inspired hall. The hall of Infinity Hydra. Leo had long planned to visit this place since his return. It held a special place in his heart. In fact, all the guilds he visited did. But this one even more than the others.

Facing up the abandoned caste, Leo held out pretty white flowers wrapped very well in a special fabric, sighing as he looked upon them and thought of what they represent. He gently placed them on the doorway of the structure, keeping his kneeling position afterwards. And he stayed there, the wind grew stronger, but maintained its gentle breeze. Occasionally carrying soft leaves to brush against his cheeks as if someone had been caressing them. The feeling he felt inside, the warmth, the comfort, the gentleness of the wind, made a smirk creep up on his face. Whispering to himself "Yes, My Lady, she's doing well." 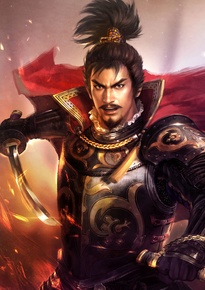 Nobunaga on his journey across earthland had spotted what appeared to be a ruined Midian castle in the distance, flanked by two samurai armed with nagamaki he traveled on foot in his full regalia. From a distance the men appeared real, but up close they were translucent, and to any with spirit sense or at least knowledge of spirits would realize what they were. Curious the samurai made his way down the path the the front gates where he saw a grizzled figure.

Changing his footfalls to allow them to carry he approached and stood at a respectful distance, seeing that the man appeared to be paying respect to the keep. He at first spoke in ancient midian, a dialect long lost before correcting himself. "Greetings. Do you know this place?"
He asked, as he removed the demonic mask from his kabuto so as to be able to lock eyes with the man.
Sir Leonard

Leo had been having a mental conversation with a loved one from beyond the grave who used to be an Infinity Hydra mage, one of the strongest in fact. How he missed her so much and wished he could have spent more time with her. Learning her death while wandering Earthland by way of having Lina delivered to him was not how he thought it would go, and it was painful. Perhaps his time was really up he thought to himself. A reaffirmation of his initial thoughts coming back and one would think he would be used to it by now, but really, he just wants to not be reminded every once in a while that he was a relic.

His contemplation was cut short when he felt a presence nearby. And though he couldn't tell what kind it was, it was surely not an enemy. At least, not yet, or never will be. The stranger called out to Leo and asked what this place was, despite not understanding him at first for use of a different dialect which Leo could tell had a hint of Midian due to his stay there. Leo stood up and turned around to see a man removing his mask as a gesture of good faith, Leo saw the man's face, and in reply, he removed his hood. Leo narrowed his eyes at him, thinking where he has seen the man's face before. Something about the face itself reminds him of something he saw while wandering Midi. The man, dressed in full regalia and had some sort of spirits accompany him looked to be a big deal. In fact, they look to be important people from Midi possibly drawn by Infinity Hydra's Midian inspired hall.

"This... used to be the guild hall of Infinity Hydra. Excuse me, but you look familiar. Like Midian royalty. May I know who you are?" he replied.

Nobunaga grinned as the man turned and lowered his own hood, changing into a laugh when the man thought he had known his face. His laugh seemed to echo and carry further than it should. It was the kind of laugh that once struck terror in his foes and courage in the hearts of his men. "You do not know my face. I am Nobunaga, Daimyo of the long forgotten Oda. You say this keep was a guild, not a castle?" He added, walking over and dispelling the two spirits. His keen chocolate eyes studied the face of the man before him, noting the scars, and the way he held himself. It was clear that the man was no stranger to the ways of war. "And, what is your name friend?"
Sir Leonard

The stranger laughed at Leo for claiming to know who he was which intrigued Leo very much. But what intrigued him the most was how loud and echoing it was and if Leo didn't know any better, his laughed was a gesture, a challenge to battle. But then he spoke, claiming to be a Daimyo of a bygone age. A man out of time from what Leo can tell. And it would most certainly explain his garbs and mannerisms because of what little he could recall of the Oda when his sojourn lead him to Midi. The stranger came forward, asking him for his name and the origins of Infinity Hydra's guild hall. "I am Leonard, from Magnolia. Yes. Erected about 10 - 12 years ago. The first master drew inspiration from Midi castles." he replied calmly.

Nobunaga noticed the temporary tension in the man's body which melted away quickly. "It is saddening to see it in such a state. Perhaps I should lay claim and restore it. No one owns these lands I assume?" Chuckling, he added, "Even if one did..." he trailed off. His grin remaining, though holding a hint of blood-lust. "Either way, well met, your name is too odd for me to speak, so I will call you Okami. Wolf."
Sir Leonard

Leo chuckled with Oda when he, in Leo's eyes, joked about taking the guild hall for himself. However, what he did afterwards once again called caution into Leo. Does he really intend to take it by force? What is his true purpose here? Leo thought he needed to play his cards right in order to preserve the hall. Thankfully, he didn't have to lie in order to raise an argument. But before he could say anything, Oda had brushed it aside and was nice about meeting Leo, even giving him the name Okami which apparently meant Wolf. This was the first because Leo had been called the Fairy, Dragon and Lion before in his life, but never the wolf. Perhaps his age has finally caught up with the name he's about to be called in the future. "Nice to meet you to Oda. he replied, bowing his head a little bit. "And while it is sad to see the hall like this, the people of Mountain Village has been keeping it mostly intact. To serve as a memorial of the guild built here, and the many powerful and renowned mages who called this place home. Such as Ardere Kasai, Wolfe, and..." he paused and looked down as he thought of the next name he was about to say, as if offering a special moment for her. "... Alye Reyold." sighing at the end as if able to breathe once more before continuing. "So may I ask, what brings your here, Oda?" I really hope you don't mean to occupy a local treasure of Mountain Village because they certainly won't let you."