"A wandering mind is as venomous as a wandering spider."

Ariadne was just sitting inside the fairy tail guild, her luscious black hair bouncing onto her shoulders and the black slimming dress adorned on her pale skin. It fit tightly but beauty is pain! That said, Ariadne likes beauty and pain, her eyes wandered around the guild for any potential new friends but decided it was best to stick with the poltergeist she called a friend, she may be childish but she was all Ariadne had at the moment. However, she did see her guild master approaching her and this was truly a rare occurrence, usually he just quickly walked past her and tried not to make eye contact as most people did these days. This time, he walked up to her and said a few simple words. "Ariadne, there's an.. Infestation of arachnids in magnolia and no matter how much we try, the spiders have mutated to be immune to the magical attacks and since you have such a strong.. Uh, bond with them? I've decided you will be the best for this job." The man coughed a bit, waiting for her response. Ariadne held a wine glass in her hand, swaying it around a bit as she thought about if she would even feel up to taking this little task.

However, Ariadne did think back to how the guild accepted her and spectra when they first came here even if both girls were incredibly horrific and disturbing in nature. Not that they weren't beautiful but the aura they gave off usually scared people away and since people were so quick to judge, it was natural. Ariadne simply smiled at the uneasy guild master, nodding her head as to signify that she would indeed accept this little job of his. It wouldn't be too hard for Ariadne because while the spiders were immune to magical attacks, they couldn't resist her spider queen magic! It gave her complete control over the spider arachnids, as many don't know.. Not all arachnids are spiders but all spiders are arachnids. If the spiders weren't being so aggressive, normally she wouldn't care if they were running amongst but these little shits were giving spiders a worse reputation than they already had.

The tall pale woman got up from her chair and sighed, stretching her legs because we don't love a sister sprain. Her long pale legs were hairless and perfect, as she always was! The true definition of the word, while her partner spectra was the definition of the word childish, very free and playful but also a major brat. This eventually didn't bother Ariadne anymore though and she didn't mind doing jobs without spectra sometimes. Currently, spectra is on a job with one of her other friends, Jaqueline. They didn't get along well but when they did, it was a truly rare sight that you would see on a nature channel. Her legs moved one foot in front of the other, moving through the guild hall closely and tightly as not to bump into any of her other guildmates. How sad it was that she would be alone on this quest but other people's magic would have no affect on these sort of spiders, magical mutations in animals were rare but they could also spread such as a nullifying type of mutation that makes it so they're more aggressive and magic spells have little effect on them. It could have been just a spell gone wrong or maybe someone was tampering with the lovely creatures but one thing was for sure, if the creatures attacked her then they would face the ultimate punishment of defying their queen! Death. Though Ariadne wanted to do this in a peaceful manner as not to harm her little eight legged friends, if she needed to she would use all her might to get rid of these once beautiful creatures.

The door to the guildhall shut behind her, it's echo surrounding out towards the area. Her nose inhaled the fresh air of morning and she knew it would be  long day today if she didn't hurry this up, she might be at it all day and that would mess up with her spa day! It was one of her only days off to spend the hard earned jewels she had worked so hard for, the amount was going into higher prices as she climbed the ranks of this guild in the matter of a few short months. Most of her jobs right now only ranked from twenty thousand jewel to thirty five thousand jewel. This job wouldn't have a reward, except the kind words she'd hear from all the lovely citizens and if they weren't appreciative she would send those spiders right back into their homes and make sure they caused chaos, so let's hope they appreciate what she does for them! Her heels left deep marks in the dirt, not because she was heavy but because when she walked she put the weight she did have on her foot, helping to train the muscles in her legs to keep her agile form and great leg strength up, such as a spider does.

As she approached the lovely housing district of magnolia, she saw pure chaos as some people ran screaming because spiders were crawling in their clothes and hair while others tried fighting them off with various household equipment. There weren't many mages so most of the people simply didn't try magic spells but the ones that did soon found out that magic has little to no affect on the adorable creatures, Truly, this was a problem as Ariadne was getting a spa later and the place was overrun with spiders! The workers couldn't work in this type of environment so Ariadne did what she did best, She sung a song. Her voice was beautiful and melodious! While there were no words in her song, it seemed as though the spiders could all hear something the people around them couldn't almost as if a trance, the spiders all quickly fled to her, surrounding her like an army and as she stopped her song, her final command was this; "Leave and never return, be healed and vanish." 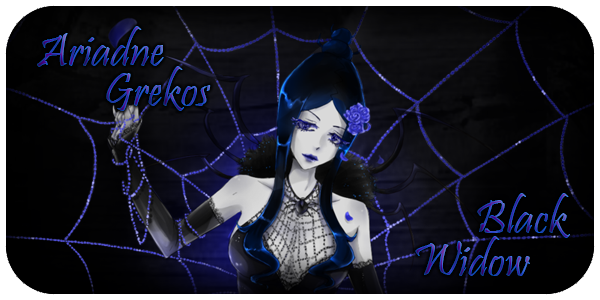