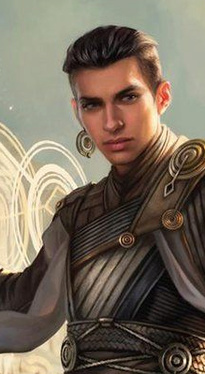 Description:
A modular and flexible type of magic aptly named so for its appearance as it is often expressed through usually white in colour geometrical shapes. Blank Geometry consists of a bucnh of basic building blocks that the wielder brings together in a cohesive and sometimes grandiose shape in order to cast spells; for example a hexagon often symbolises protection while a triangle shows offensive or attacking intent, thus a mage using Blank Geometry could produce a shield that hurts the attacker by using these two shapes. However what each shape means is different for each user and that's because each and every one of them depends on a slightly different object to channel their magic. This flexibility allows the magic a wide number of uses as it is adaptable and can be constantly changing.

While capable and competent in battle Adrian is not a heads on fighter. He utilises his magic to mix fast, precise strikes with mobility and stealth. Depending on the situation Adrian may shift his focus to either swiftly dealing damage or opperating as much out of the enemy's eyes as possible. Defense is not his forte which is why rarely if ever does he incorporate purely defensive spells in his repertoire.

Spells: As a starter character at D rank, you start off with 3 regular D rank spells and one D+ rank advanced spell.
« View previous topic · View next topic »