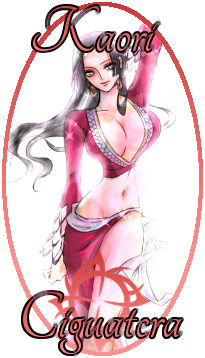 It seemed that Kaori was in need of a passport in order to travel outside of Fiore to Seven, Bosco, and Minstrel. Until recently she had thought nothing of it, but now that the borders were truly open going through illegally wasn't really needed if she could get her hands on a passport. She didn't believe that it would be all that difficult, not even when she saw the huge crowd at the docks. People were screaming and yelling, fighting with pushes and shoves in an attempt to get to the front. Kaori only laughed as she made her way through Hargeon, eventually reaching all of the trouble. It was loud and everyone was obnoxious, honestly it was a lot to handle and in general, was just a mess.

She was aware that she couldn't attack anyone here, or she wouldn't get her passport but that didn't really bother her but she did bother them. Her beauty drew their eyes away from the constant bickering and in turn caused them to be infatuated with her. Even the woman! The children were too young to be infatuated but even they appreciated it! Kaori looked through the crowd, searching for someone who could help her hide the fact that she is from a dark guild and in the corner of her eye she saw a man bearing the Sabertooth guild emblem. "You." She pointed at him, the crowd moving out of the way, leaving him vulnerable in the open. "You are going to help me." The pointed finger turned into a gesture symbolizing him to come closer and of course, he willingly obeyed as all men do when it comes to such beauty.

What better way to get a passport than by pretending to be in a light guild. It seemed the sabertooth mage understood what was happening as the crowd moved out of the way for them so that they could get to the front. Her beauty had always opened doors for her, and this time was no exception. As they approached the passport station Kaori let the man with her do the talking. "We're Sabertooth mages, here for our passports." The worker could clearly see the man's sabertooth emblem but he couldn't see Kaori's but as she made a cute blushing face, holding her hand to her mouth as if she could have forgotten the emblem at home it was all forgiven and he took their pictures, stamping the papers to make it official.

Now she could finally travel anywhere legally, not that she really cared about the law, it just made things easier. Traveling was always interesting, seeing the other countries and new people. She was happy that it was so easy, but then again when you are so beautiful almost everything is. The world hands you things on a silver platter and of course, you take them because why wouldn't you? These thoughts made Kaori feel bad for other people in the world. The ugly people. Which according to her was well... almost everyone.