The sword that shouts thy name 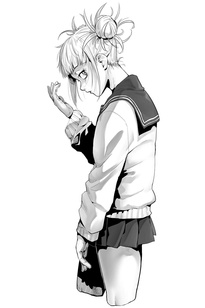 The sword that shouts thy name

The young silver wolf had been minding his own business. There wasn't much going on, at least nothing noteworthy. A bored look on his face can be seen, as he doesn't have an idea of what to do. Getting up off of a wooden park bench, he had decided to go on for a walk. He wanted to find something to do, and with little ideas he has. He was at a dead end. "Why must days like these be boring" Veleno would think out loud to himself, with nobody noticing. Not even the townsfolk could hear the tiny mumbling coming from his mouth. After aimlessly walking away from the town, veleno would bust a right to where he would come face to face with a dozen of trees, with a sign.

There was a sign with a skull, and a mark crossed through it. He could see himself walking in a forest, but the forest itself looked suspicious. As if it was telling him something. Telling him that he shouldn't enter this forest. As it was just outside of town, and it smelt like death. From all the way to the beginning of the forest. The smell had gotten to his nose. "Gross, did someone die here?" Covering his nose with his left hand. Sounding a bit muffled as he questioned what had happened here. Veleno was too curious for his own good. "Not like the forest will search itself" With that being said, veleno would take part on the trail, located at the beginning of the forest. Unaware of what may pop up.

Veleno had seemed to be a daring person. Letting his curiosity get the best of him. Veleno also liked to learn of his surroundings. As it may seem unrealistic for someone to venture into the unknown, with a sign warning him not to enter inside of the forest. With the smell becoming worse by the minute, as he slowly walked through. Light barely piercing the forest, as the tall trees would absorb most of the light. In order for it to stay healthy. Also, because they're enormous trees as well. Veleno began to hear a sudden crack. The sound of a crack when one would step on a twig. It didn't sound too far from where veleno was. "Who's there?!" Veleno shouted as he took his sword out of its sheath, that was rested on Velenos left side. A mysterious looking man walked out of the shadows.

The man had worn a black cloak, with red clouds painted on it. An orange mask can be seen. He didn't wear any shoes, and didn't care whether or not mud would get beneath his feet. While it hadn't rained yet, the ground felt soft on his foot. Maybe the man liked to be barefooted. "I heard lots about you Sir Veleno of Silver Wolf" The man shouted enough for veleno to hear him, as he was standing 23 feet away from him. Veleno felt shocked, once his name came out of the strangers mouth. He was shocked enough that he felt his skin crawling, and vibrating through his body. "How do you know my name --" Veleno pointed the tip of his sword directly at the man. "My gender should be a secret to everyone, even from my guild mates" Veleno said, unsure how the man knows who Veleno is, and how did he knew what gender he belonged to.

"You're not very good with keeping secrets then, even the smell you give off, should be obvious enough" The smell emitting from Veleno was something unheard of to him, as he would begin to smell himself to be sure. Unfortunately, the man had been right about it, but he had never smelt Veleno, and he had only just met the man. "Enough of this, if it's a challenge you want… Then --" Veleno stabbed his sword at the heart of the forest, using his ability that allowed him to absorb the dark energy emitting around him. His right hand pressing on the handle of the blade, and his left hand covering his right eye. Seeing this as an opportunity to attack, the man would take out his own sword, and began to throw it at veleno in a straight away angle. Veleno wasn't quick enough to grab his sword and go, as he would dodge the incoming attack. Raising his right hand up, in order for the sword to bypass him. Being lucky enough that the sword didn't take a piece of his flesh, as the battle already started.

Veleno quickly picked up his sword, and charged at the cloaked figure. Uncovering his right eye, as veleno would try every angle, and every way to strike his opponent. Only for him to only cutting away at the air, and hardly getting a piece of clothing off of the cloaked man. Proving that his speed was not to be taken very lightly. While he was blindly attacking. The man sought an opening, and grabbed Velenos shoulder with his right hand. Throwing himself over Veleno, as his sword would appear right into his hands. Lunging it at Veleno. Targeting his right shoulder. Only for Veleno to show off his quickness, and agility as he spun out of the way of his attack. Using the hilt of his sword, to make an attempt to attack the cloaked man in his sides. With enough force, to back him into a tree. Hitting his back amongst the tree, which enabled Veleno to create enough breathing room.

The man took his sword, and began to attack once more. But this time, he was going for a strike. Only for Veleno to block it, as his sword had hit the centerpiece of Velenos sword. Veleno had guarded against his attack, by blocking it in a diagonal formation. "Not bad" The man commented, as he continues to strike Veleno hard, and aggressively. Veleno would continue to block, and readjust his hands as was being attacked from different angles. The cloaked figure proved to be a nuisance, as single sweat dropped below Velenos cheek. He could feel his sword shaking after each hit, unable to think of a way to counter, only for him to allow himself to absorb his hits until he was backed to a tree himself. Velenos sword started to emit a blood red color, as he would aggressively use his sword to knock away the cloaked figures own sword.

Filled with irritation, as veleno was taking in hits. He had waited at the right time to use his special sword attack. Veleno began to place his sword near the right side of his hip, as both of his hands would be on the handle of the blade. Purple aura surrounded the Silver wolf, as though he was prepared to throw an angry blast of energy that could total most of the forest if the man didn't decide to block. "Ok, ok I give up" Noticing that Velenos face was written in anger, however Veleno had stopped his charged attack, before he was about to kill his target.

"That sword" The man pointed to the one Veleno was using. "It had used to be mine, but I lost it in the middle of these woods. You can tell the bad smell that's coming from these woods, as it was originally founded here, that carried out the voices of the dead bodies that I've killed in my past time. Not sure how you got it, but you can keep it. It's your curse to carry on now." The man said, as he would throw the hood up on his head. And walked back into the forest. With a confused look on Velenos face, he had many questions, but the man looked like he didn't have the time to hear them. Veleno looked at his sword, realizing that he could hear voices coming from the sword, that was in his head. Not noticing it until now.