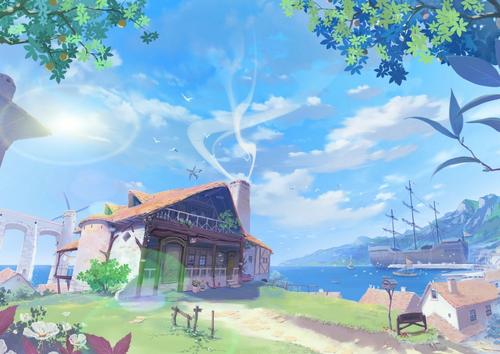 The summer home off the coastal area near Clover Town. Inside is a well furnished, two story living space filled with just about every luxury a family could want. It's a rather troublesome day, as the bedroom to Morgan's room is locked and he's not coming out or even eating. His parents are worried sick and just want their son to come to his senses. Desperate for help, the family puts an ad out for a mage to assist them, offering them to be compensated for their travels.
Aura

Clover Town looked nice this time of year. There was no way around it, and the newly-appointed guild master wasn't planning on denying it either. Honestly, she enjoyed being able to leave the guild for a leisurely stroll along Fiorian shores without the need to pull her sword or flare her flames for another fight. She'd done enough of that for now, and knowing the future would hold more of the same medicine, having a change of pace was more than welcome. And this type of change, especially.

A simple request any at the guild would have and could have taken, yet it was Kenna who had taken it upon herself to reply to it. The reason being that this particular situation hit a few personal strings. Ones she couldn't ignore. The request came from worried parents, their child locking themselves in their room without a will to get out. They sounded desperate. Although most people in their sane mind would advice the parents to seek help from a professional if they couldn't handle their child, the demoness figured there might have been an ulterior reason to the request not mentioned by the clients for whatever reason. Knowing she could trust her gut on that, Kenna had thus set out; that even in the worst case, if this truly was just a case of teenage rebellion, she could still assist with gaining the child's trust.

The road she had been walking on had been a calming one. And although she could've opted to fly here and save time, she went against it and had held a steady, yet calm pace to reach the house. To free her mind from both the irregularities that came with the new position, as well to prepare herself what was to come. The address she was supposed to meet at was only a stone's throw away at this point, and if she addressed the situation wrongly, not only her reputation but also that of the guild would be at stake... leave alone what it would mean for the youth she was supposed to help.

Carefully she knocked upon the front door's smooth surface, to announce her arrival and wait for someone to answer her call. Once the door would open, the slayer would introduce herself properly. "Ah, pardon my intrusion! I'm Kenna Terrynhain, a mage of Sabertooth. I'm here for the request you put up regarding your son?" she spoke kindly, even making a small bow to the one opening the door. She figured she'd keep the fact she was the newly-appointed guild master hidden for now, if only to use it as a trump card later on if she needed to. Her recent appointment made it sure that only the Magic Council would know of her new status, so at best people would recognise her as one of Sabertooth's aces.

The door opened for the woman cloaked in red, a lone woman standing in front of her with a worried expression. She wore reading glasses and was dressed fairly conservatively despite the size of the grounds and home suggesting other opinions about their financial situation. "Thank you for coming, Ms. Terrynhain...Maybe at a rather bad time but welcome nonetheless." The hostess said with a slight french accent. She was welcomed into the house and entered a fairly luxurious living space. The walls came adorned with several keepsakes, paintings of people much older than they, awards for distinguished service, even a stuffed head of an animal above the cold fireplace which had gone unused for quite some time, based on the blackened markings inside. The woman came to guide her towards the table where fresh tea had been brewed for her arrival. Above them, muffled voices could be heard. One boisterous and loud while the other was much softer, full of hurt. The woman looked at Kenna and winced though would introduce herself after the shouting had quieted down.

"I'm Elizabeth. Elizabeth Primrose. That shouting you hear upstairs is..." she trailed off and would cross her arms after taking what seemed like the world's longest sip of tea. "I guess I should start from the beginning. Our son Morgan, he was-he started dressing strange just three years ago. It was small things at first. Maybe a girl's shirt or pants. He always said that boy's was "too rough for his skin" or that "it fit much better like this". We tried to talk to him but he was always so distant. We came down here just within the past day and had another argument. He's been locked in his room ever since and refuses to come out." A slam of the door came along with the heavy footsteps of boots hitting the floor. They landed and would fume off out the kitchen door in the back. His exit was signaled by another slam of the door. Elizabeth winced and gazed down at the tea set on the table. "You'll get him down, won't you?" she almost begged. "He won't listen to us, refuses to eat; we just want our son back to how happy he was before this began."

The woman who opened the door was someone she didn't expect; or rather, be it in appearance. One wouldn't expect her to be dressed so casually compared to the size and luxury sight of the house; her expression was one filled with worry and the eyes behind her glasses seemed tired. When she was welcomed and asked to come inside, the woman's accent caught her attention. Interesting. "Thank you, and tis why I'm here, ma'am." Kenna spole softly, following the woman through the house until they entered a large living area, one that fairly surpassed the size of her entire living quarters back in Sabertooth. The room was decorated extravagantly, with detailed portraits, awards she could only guess to be of the family members having frequented the house, keepsakes, and as a cherry on top, even a hunting trophy of a majestic beast. Her gaze hopped around the room curiously, taking in every single detail she could, and only tore away from the scenery once they were near the table.

As both women were to get seated, two voices resonated from above, far clearer to the slayer's senses than they would to another human. Yet she purposely paid no attention to the actual words being said, not wanting to jump to conclusions, and instead took note of the feelings and emotions rushing through the voices. A sigh escaped her lips as she saw the woman before her wince, and gestured it was fine. The young guildmaster gratefully accepted the cup of tea and listened carefully as she introduced herself as Elizabeth Primrose. The sip Elizabeth took of her tea afterwards was so long the demoness actually worried the woman was trying to drown herself to some degree, however much that would be possible with a single cup of tea. Likewise, Kenna too took a sip of her own cup, and listened attentively to Elizabeth's explanation, already feeling the pieces of the puzzle before her fall into place. "I see-" she was suddenly interrupted by the slamming of a door, pounding footsteps on the floor as they made their way down the staircase, followed by the subtle change in the man's angry march as he reached the downstairs, and another slamming of the door, announcing his exit from the house. From what she guessed, it couldn't have been Morgan, not with what Elizabeth had just told her. The woman's plea struck home.

Kenna knew how hard it was to be something others wouldn't accept because it was deemed "strange" or "unnatural". How hard it was to develop that real you within an unaccepting environment. Her warm hands cupped themselves around those of the desparate woman. "Mrs. Morgan… no, Elizabeth. Don't worry, I know exactly what to do with this situation, and I don't plan on leaving until it is fixed. However… I'll need you to promise me your full co-operation if I were to ask for it. Can you do that?" The white-haired demoness spoke softly, awaiting Elizabeth's reply. She took another sip of her tea and put the cup back down upon the table, and stood up. "Then I'll be heading to Morgan's room. Upstairs, right?"

To be honest she could find their son's room without issues if she relied on her sense of smell or her heat vision, but that was against her code of conduct. Only in times of need would she breach one's privacy, so she waited for confirmation on his room's location before heading up the stairs. Kenna couldn't help but pity the boy for the way his parents acted… although it seemed like his mother would take peace with the situation, his father seemed all against it from the shouting she'd heard earlier. Her priority was getting Morgan to leave his room and eat something, then she would tackle the issue that were his parents. Once arrived at the door, Kenna knocked softly. "Morgan…?" she asked quietly. "My name's Kenna, I'm a mage from Sabertooth, and your parents-" She shut her mouth immediately. Wrong approach. She cleared her throat. She then sighed and leant against the wall beside his door, crossing her arms on her chest. I'm here to help you, Morgan. I won't ask you to let me in, as I'm perfectly fine with a door inbetween us, but I'd like to hear you out, if you'll have me. Hear your side of the story.." There was no demanding tone in her voice nor her words, only Kenna trying to see how willing Morgan was to converse with her. She'd wait as long as she needed for him to start talking.