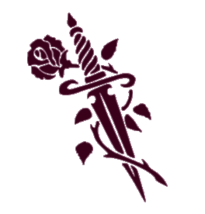 Here is Hidden Blade's Magic Vault, where we shall register all Guild Spells, potentially various other magic related Pets & Items in the future. The Guild Spells are assigned by department, meaning on the Director of the department they are assigned to make use they spell from that department. The only exception to this rule is the Chairman, who may use all available Guild Spells..

The Assassins Final Order:
Name:  The Assassins Final Order
Rank:  H++
Type:  Burst, Offencsive, Piercing DoT, Effect
Damage:  420 HP immediate, then 210HP per round
Range:   1,000 m
Speed:   800 m/s
Duration:   3 posts
Downside:  N/A
Description:  The Director of Combat has seen things that would frighten even the most veteran assassins, and in their long career has learned on rule. One commandment. One truth, above all others. The best Defensive is swift, and merciless offensive, with a show of absolute power. This idea, and the name of the guild, is taken literary when this spell is used. The user pushes their hand forward, and touches their guildmark suddenly summoning a phantom dagger made of magic which quickly multiplies into an uncountable amount of ethereal, and magical blades which become a whirlwind of magic around the user attacking all enemies within range before suddenly disappearing into nothing, as if a ghost vanishing in the night.

For the duration of this spell, the user gets a buff to spell damage equal to 230%
These blades have an instance magical property that is unlike any other. Should they encounter any resistances, magical or otherwise, they can pierce through as if the resistance is not there. If this happens, the base damage of this spell is cut in half. Anything within range cut by one of these blades is immediately subjected to 420 HP damage as the blade cuts them, just as a spell or physical attack would. However, that is not where the assault stops, these blades just like a serrated knife sear into the soul and magic of the person damaged, and do Damage over Time in the form of a soul bleed. This secondary damage does NOT apply if someone was not damaged by one of the initial blades. This secondary damage bleeds the user once per turn for three turns after they have been affected, dealing 0.5 H++ Damage (210) each turn. This damage is internal to the user, and due to only being applied if they have been damaged by the first initial attack, the bleed is unaffected by armor and magical protections which protect externally.

Gladii Absconditum:
Name: Gladii Absconditum, The Hidden Blades
Rank: H++
Requip Type: Weapon
Grade: Normal
Linked Equipment: Strong Weapon (p.°243)
Requip Damage: 622 HP per hit
Requip Durability: N/a
Range: Melee
Speed: Melee
Duration: 25 posts
Downside: Sacrificing range and speed for 50% additional requip damage
Description: These twin daggers are the physical manifestation of the guild that possesses them, crafted specifically to embody the ideals of Hidden Blades, and especially it's Combat Branch: Unrelenting strength, overwhelming swiftness, and a quick, certain, and merciless death. Enchanted with a variation of forbidden death magic, these blades are able to store and release an aura of pure darkness that radiates with sinister energies. The blades themselves are nearly weightless, extremely durable, so much so that it is physically impossible to break them, and will forever retain a sharp edge. After all, a dull blade is not a tool fit for a member of Hidden Blades. These daggers, though, possess another secret, an ability that is as much an affront to all things living as it is threatening: Enchanted with death magic, any injury imparted by these blades, no matter how large or small, will force a curse of the most malicious kind upon its targets, tainting them and, ultimately, causing instant death upon being struck (Requires explicit OOC permission to be used on players, player-owned NPCs, and Event NPCs in any way), a thing as dangerous as it is useful for a guild of Assassins, wouldn't you agree? 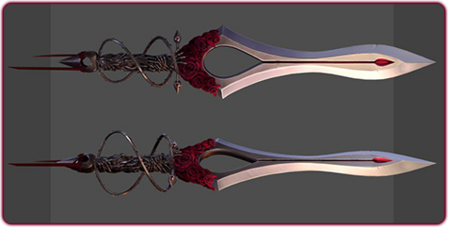 Creed of the Executioner:
Name: Creed of the Executioner
Rank: H++
MP Cost: 420 MP
Category: Offensive
Type: Burst, Charge, Dual Buff (Strength, Spell Damage), Dual Damage (Melee, Spell Damage), Piercing
Damage: 315 HP per post (Melee Damage OR Spell Damage)
Range: Melee
Speed: Melee
Duration: 5
Downside: Doubled base MP cost for 50% more damage. User must sacrifice 10% of their max HP upon casting this ability for 50% stronger buff
Description: The user of the ability begins concentrating magical energy within the blades, which will manipalute the nature of the user's own power and transform it into something sinister, dark, and entirely unholy, allowing the user to gradually store more and more death magic within the blades. This magic, while being quite destructive in nature and harming even the user, will also strengthen them considerably, granting them a 345% buff to either Strength or Spell Damage for the duration of this ability. Once the buff has been allocated, it is set for the duration of the ability and cannot be reallocated or switched around as long as the ability remains active. Over the course of the duration of this ability, the daggers will collect and store more and more sinister energy, the damage of the ability increasing for every post it remains active, up to a maximum of 2.5x the original damage for a Burst spell of this rank (factoring in the downside) on the 5th post after it's activation.

The ability, however, can be released at any point during its duration. To release the ability, the user surrounds the blades with an aura of pure death magic before using both of them to attack a target within their melee range at their own movement speed. Upon striking the target, the aura will corrupt and destroy everything it touches, the user's target being no exception, dealing the charged damage in a massive blast of death magic. This ability can either use Spell Damage or Melee Damage as basis for its damage calculations, though only one of the two may be picked per casting of the ability, it must be picked once the ability is cast initially, and, once decided, cannot be switched until the duration of this ability runs out. The death magic used in this ability is stronger than normal magic, so strong that it will easily burn through defensive spells, barriers, shields, and armors of any kind, bypassing them to deal damage to the target directly, though, if used in such a way, sacrificing 50% of its base damage

Knowledge is Power:
Name: Knowledge is Power
Rank:  H++
Type:  Burst, Defensive, Buff, Copy
Durability: 1260 HP
Range: 1,000 m
Speed: 800 m/s
Duration: 25 posts
Downside: N/A
Description: The Director of intelligence knows one thing to be paramount among all others, and that is the truth ‘Knowledge is Power’. This simple truth allows them to warp the ethernanos in the air to fit their whim, and their mission. After focusing their mind, and clearing their thoughts the user of this spell slams their hands onto the ground and causes a wave of ethernanos to surge outwards centered on them. This wave of power is invisible to all but those with the hidden blade guild mark, and at most will feel like a breeze blowing in the winds.

These ethernanos clasp onto members of the Hidden Blades within range and provide a boost to aid in the mission at hand, all allies within range get a buff to defensive effects equal to 100%, and a boost to speed equal to 80%, and the effectiveness of any debuffs they receive are reduced by 50%. In addition, they are affected by the following.
First, each round they get an invisible film of ethernano which coats their skin or clothes. This film acts as a shield defending against 1260 HP damage, and restoring this coat at the beginning of each of their posts, in addition to this the film of ethernano is resistant to piercing damage, meaning all effects that would pierce through its shield are reduced by 50%. These ethernanos, however, have a secondary even more dangerous effect.

Ultimate Reinforcement:
Name: Ultimate Reinforcement
Rank:  H++
Type:  Burst, Effect, Heal
Healing:  420 HP
Range:  1,000 m
Speed:  800 m/s
Duration:  25 posts
Downside:  N/A
Description:  The Director of Support has learned one important lesson, which is paramount among all others, and that is the importance of resources. This simple idea is what leads to the creation, and requirement of such complex magic in times of dire need. The user is able to warp the atmosphere in the area, and modify the magic in the area. After focusing on their goal, and the mission they spread their arms wide and a wave of magic seeps from their body, surging outwards encompassing a massive range. This magic fills all air, and curves around barriers filling anything that is not air tight.

While within this effect, and touched by this magic, members of Hidden Blades, denounced by their guild marks, get the following effects. First, they get a 50% buff to a stat of their choice among Spell Damage, Spell Durability, Healing Effectiveness, or Physical Strength, depending on what is needed for their job, and while within this magical cloud they regenerate 5% HP, and MP per round, not to exceed caps.

In addition to this, the cloud has another important effect for allies within. While within range, those affected are healed 420HP once per turn, and can at will nullify one negative effect or debuff which is affecting them, if they pay mana equal to the cost of the effect.
However, the Director knows it is not just the resources of their team that matters, but also of any adversaries they might face. As such, while within range, and affected by this spell anyone without the Hidden Blades guild mark is subjected to the following. The cloud modifies the magic in the air and makes it harder for those affected to defend themselves, giving them a 50% debuff to all resistances. In addition to that, they have a harder time connecting to or modifying their magic, as such they get a Debuff to Spell Cost equal to 50%, and Finally the cloud itself is toxic to those affected, and if someone does not have the Hidden Blades guild mark, they get a burn to HP and MP equal to 5%