A Masters in Clownery~ A Masters in Clownery~

Re: A Masters in Clownery~ 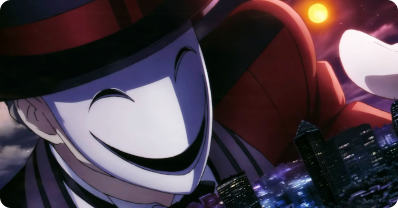 So his Queen had risen. All of his delightful plans had somehow led to this exciting new chapter. It was riveting really, and now he helps nudge it along. Play it out, until it manifested into a wonderful clockwork of chaos, turning and turning, pumping out more horrors for him to use. A means to enjoy more suffering. Such a tasty prospect it was. Dressed in his Ringmaster suit, the clown would trot along the mountain, unfazed by the chilling wind and snow that surrounded him. For he had a purpose as he moved toward the settlements. He arrived in a town towards the base of the mountain. It was surprisingly busy; Jester had half expected all the nearby residents to flee after news got out about the massacre at the Castle in the mountains. A massacre he had partaken in.

"Team A you'll be based around the entrance..." Jester caught wind of the curious conversation, stopping in his tracks. He would listen in on the conversation, from the sound of it, men were being distributed to guard the settlement. He would duck behind the wall of a house, listening in to where each of the guards would be situated. "And finally, Team D will patrol the grounds. Remember men, stay vigilant and prepare yourself. There is a new dark guild rumoured to be set up near here, and from what I hear; They're pretty...twisted. If we're to establish ourselves as the 'New Law' of Mt. Hakobe, we'll likely come to face them soon enough." Underneath his mask, Jester face would split into a wide grin. The 'law', the very thing his Queen abhorred more than anything, the reason Errings Rising came to be, what it aspired to eliminate. What an exciting discovery. Jester knew what he had to do, what his Queen would expect him to do.

Jester moved out from behind the wall, eying the group of man which made up the mass number of the soldiers. He walked over to them casually, almost hopping along as he approached. A man who looked a little too young to be a guard spotted him.

"Hey, who are you? You don't look like a soldier, are you a recruit?" He asked, Jester's grin only widened under his mask, spreading across his face in an unnatural fashion.

"Sure, why not, here good sir let me show you..." Jester raised his right hands and snapped his fingers, "What I'm capable of." Several colourful knives appeared around him. Soaring forward, two of them buried themselves in the man's chest. There was a moment of shock amongst the crowd before the soldiers realised what was going on.

"We're under attack!" Roared what appeared to be a general. Some of the younger men tried to flee, but Jester quickly chased them down with more knives. Jester began to cackle running into the fray; he snapped his fingers and the air rippled around him. Blue and Red Clown horns would rain from the sky, landing around them. A general who was charging towards the Clown had the misfortune of stepping on a red horn. The explosive spread violently, taking out the majority of the soldiers and the men who looked too young to be fighting in the first place. The remaining few, the tougher men, well they didn't fair well against Jester's funny blades. A few well-directed attacks and several of them would fall dead. Leaving all but one defeated. Jester approached the man who was climbing to his feet, the clear leader of the group.

"Are you from that guild? The dark one that's settled here. You may have defeated my men, but you will not best me." He grunted in a determined voice, holding his bleeding side that had been cut with a funny blade. Jester giggled excitedly.

"I am indeedy. Errings Rising welcomes you to Mt Hakobe."  He said, before raising his palm, three blades appeared around him, hovering in wait for his command. "We hope you've enjoyed your stay, but your tenancy is closed. Goodbye." The man threw his arms up; two long chains shot towards the clown. But the blades flew forward, batting them away. There was a loud squelch as a blade buried itself in the man's heart.  Jester turned, eying the corpses that lay there. Another blade appeared, moving towards the dead leader's neck, it would carve away, searing back and forth with its serrated edge. Until finally, it came away, Jester reached down and picked up the decapitated head by its long black hair. Turning on his heel, he began to skip away, making his way back to the guild, with a lovely new gift for his Queenie.

» Eon Masters
» Ark of the Dread Masters
» Masters of Wind (Event Sign-Ups)
» THE FALL OF MAN: Animal Masters/Pet Humans RP l No App
» Teh meeting of minds and guild masters.(Kakuma/Hika)