A Rare Flower, A Most Dire of Wolves

A Rare Flower, A Most Dire of Wolves

Another day, another mission. At least, that's what the Runic Knight handbook had said. Grappa and Jellisha had undertaken another new job, this one entailing a dangerous journey inside of the forest to go pick some kind of flower that the town would need. It was a pretty weird one but Jellisha was only tagging along on the off chance of combat breaking out. They would be joined by a mage from Fairy Tail, Grappa all for making new friends while Jellisha was still very much on edge.

"So what's Fairy Tail like? Is it like the Rune Knights? We have tons and tons of paperwork to do. Do you have- Whoa!" Grappa's pestering was interrupted by Jellisha pulling her along as their wings would flap every now and again while they were suspended in a glide all the way to this spooky forest. The twins looked around for the flower in question before Grappa's eyes caught sight of the petals and would flail around to both her sister and their ally. "Hey, I found it!" Her sibling pawed through the guidebook for what they were looking for. Orange coloration of petals? Check. Dark green stem with thorns? Yep. "Good eyes, Grappa. This is our flower. Now all we have to is-" A whistle came as a small grop of 4 ugly goblins came out with slingshots at the ready, with paws trailing behind them. "Is to fight the obvious people who have trapped us." The twins went into action, Grappa and Jellisha holding paws as they spun rapidly in place, manipulating the wind they generated into a visible drill shape and then launching themselves towards the goblin group, scattering it into the fray.

"Woo! We did it!" Grappa said just as a pack of wolves descended upon them. "Damn!" 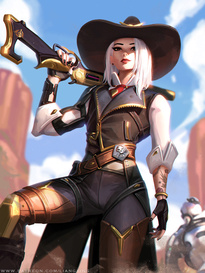 Just a few days earlier, Rina had gotten a request to do a special job for someone. It wasn't usually Rina's job to do such a low leveled job as an Ace of Fairy Tail, but the employer was someone she had known from school, before she became homeless. So, she couldn't just pass up the job. As well as this, her friend had told her about 2 baby twins. They were exceeds, who had been recently born. When they took the job, the employer had worried that they wouldn't be up to the job. That was where Rina came in, she was merely gonna be a spectator to this job, in order to overlook the productivity of the exceeds. However, Rina was allowed to fight if she wanted to.

As Rina was on the job, she had finally met the two exceeds. Her smiled shined as bright as the sun, as she looked down at them. She couldn't help but think how adorable they were. It was weird to think that they had somehow become rune knights. Either way, she answered their questions accordingly and as kindly as possible. "Oh no, Fairy Tail is not like the Rune Knights at all. You see, we actually had our tussles with them before, which was a really bad time for us. Especially since we were a legal guild. After that, we were a dark guild, and it took our guild master Sorano to bring us back up as an independent guild. I'm really happy to be there. We sort of run like a business, but instead of mass producing products, we mass produce contracts. We're a mercenary guild, which means money is our primary goal. We aren't as noble as Rune knights, where they mostly do things for justice. I really like that about the Rune Knights though. It's just that my family was homeless before, so I needed to get as much money as I could to get us back on our feet. So, I joined Fairy Tail. I've loved it ever since. I've met so many new people, and found great love with the guild. I hope you're enjoying your stay!"

After the goblins had attacked the four of them, Rina saw a pack of wolves rush out towards the group. As she looked at them, she summoned her spear to her hands. With that, extended her hand forward, summoning tons of tiny sharp petals in it. All of a sudden, they flung out, cutting the wolves. All of a sudden, she then began running towards them. As she jumped up, she jabbed her spear into them, and then used them as a surface to vault off the spear and onto other wolves. With that, the wolves fell to the ground. They weren't dead though, since Rina didn't believe that any creature should die by her hands, but she knew that she wanted to protect this baby twins as much as possible. They were strong, and she wanted them to continue growing stronger. So, with that in mind, she looked behind her at the twins, and did a small gentile smile towards them. "Well then, I think it might be time to go. You can continue asking me some questions as we walk back to turn in the flower if you would like."

As the wolf pack dredged forward to collect their prey, Rina would jump into action! Using some kind of magic with flower petals, they were sent all through the opposing pack, slicing and dicing and whatever rhymed with that! The attacks found their mark and the beasts would be hit. Some would scatter off though most of the pack was still ready and quite willing to go and finish the fight here. "Whoa, how'd she do that?" Jellisha asked, watching from afar as Grappa joined her shortly after. "You're super cool, Rin! Go beat them up super good!~" Their feline eyes watched as their partner summoned a spear and thrust it into the ground along with some fancy footwork that made short work of the wolves. Though for some reason, Jellisha wondered why she would let the wolves just go on like she had done. Was it something that she did or was Rina doing it just for them? It was kinda hard to say without knowing her better.

"Hey guys!" Came the voice of Grappa from atop the now free hill, holding the special flower in her paws. "I got it!" Crazy girl. Jellisha would hover over to her sibling and then pocket the flower before turning to Nina. "We're done here then. Let's go back and turn in." As the party began back, Grappa would hop up onto Nina's shoulder and park to use their ally as a free ride. "Okay! Um, how about the people who made Fairy Tail a dark guild? How come they did that? Was it because they wanted to rule over people? Or money?"

As Rina walked along the path with Grappa and Jelli, she took up most of everyone's time on the trail by creating a long and detailed answer. "So, you see, the reason why Fairy Tail went to the dark side wasn't because people wanted it, but for another reason. You see, Fairy Tail had become extremely barren when they became a dark guild, especially from all the people who had left it before. The only reason why they stayed that way, was because of some special loyalty to a certain person. Her name was Lucie, and she was the one to take Fairy Tail down, to the ground. She became a coming storm one day, a really infamous person. The Rune Knight's threatened our guild, and told us we either kick her out, or we will be placed as a dark guild. The GM decided, for reasons I do not know, that she would keep Lucie into the guild. After that, Sorano became GM and held a meeting to kick Lucie out and get us to where we are now, an independent guild. I am very grateful to Sorano for getting us here, because I would've never joined a dark guild. Which would mean, I would've never been able to meet everyone I love at this point in time." As she was finishing up, she got to the area where we were meant to turn in the flower. With that, she looked over to Grappa and Jelli. With a final gentle smile, she said to them, "Whelp, this is it guys. I'll really miss you too. Don't forget that you can always call me when you want to do another job again, or are just in trouble."
_____________________________________________________________________________________
Phoebe's Bank
« View previous topic · View next topic »