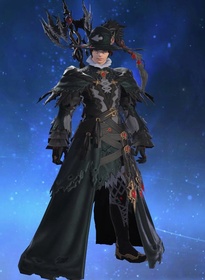 He left Ace of spades then went over to Hargeon Town to get his passport to Earthland but look around and saw the crazy line of people but decided to wait nicely like to others. An hour passed, started to get impatient and frustrated.

Then two hours passed since he started to wait in line and said, “Finally it’s almost my turn.” People around him were not happy waiting just like him but did not want to say anything to him, but some in the crowd look at him like he knew him.

This older man around 45 to 50 years old looked at him happily “I did know your father at the old shop, you were only learning how to create stuff at that time. I heard you got pretty good yourself, but sorry the shop was closed down.”

“That’s ok, I found a new passion and joined a guild” said Marink. “Hope they will give me a passport so I can get some new fabric in Midi.” He was not as happy to know that passports are not given out to everyone who asks for one. “Can you help persuade them to give me one.”

“No, you’re on your own young apprentice.” Old man said lightly laughing.

“Thanks for the help anyway.” Marink said under his breath. So, he was next in line just after the old man he was talking to in line. The crowd was bad but not trying to think about it and talking with this old man helped.

The sun was at about 1 o’clock when Marink got to the window and was asked some questions about himself.

Women at the window asked, “Are you or have you ever been in a guild and if so what guild?”

She then asked, “Have you ever been in a dark guild or committed shady acts?”

The he replied “No”

Then her final question was “Reason for Passport?” This was a question asked of everyone getting one, so It was not uncommon. If you answered this wrong, you could get a limited passport which means just casual activity in other areas.

He though it through then answered, “Do jobs in Midi.”

She handed him some paperwork “Fill this out.” He filled this out and brought it back to her “Thanks will check this over with our records get back to you soon.” She checked records “I don’t see your name in the official record books are you new to the guild?” as these books were updated infrequently for them.

“Just let me give you a passport, wait I knew your father as well just like I heard you and that man before you are talking about.”

“Really!” was shocked that this town knew him.

“He left me a blank package for someone named Marink Quizzellhammerr”.

“Why would he do that.” Marink said shocked.

“He said you’re his special person and hope someday you could continue his work.”

Marink opened the package a found out it was a leather-bound passport book, but it was not official without the seal. They chatted some more about this adopted father. He found out she liked his work as well a decided that she would fill it out and make it official.

Then he thanked her for helping him out and wanted to see his next creation. “I will come back to show you my next creation once it done” he said as he was walking back to Ace of Spades.