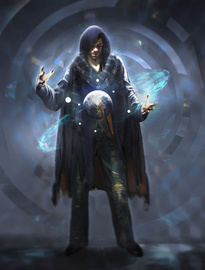 Rune had been waiting for this day. He had finally left his parents and was out on his own in the city of Magnolia. It had been a rough journey in the countryside from the dig site but once he made it back to the main roads that were traveled a lot he was fine making it to the city. He had the tattered cloak that his grandfather gave him freely flying in the wind with the hood down while he enjoyed the sun. His scarf loosely tied around his neck like he normally wore it the ends blowing in the wind as he entered the city. Turning to wave and give the guards a smile at the gate. “Hay you don’t by chance know where the Fairy Tail guild is at do you?” the guards would answer his question giving him the directions that he would need. The way would lead him through the shopping district something that Rune was used to as most city guards would give you directions through there. Only stopping a few times to look at a few items that caught his eye in the windows of the shops it wouldn’t take him long to fight his way back out of the shopping district and into the area where the guild hall should be in.

Spreading both of of her arms out like wings, Arcadia lurched back a few steps.  Swirling razor ice gathered about her outspread arms in vaguely draconic wing-shaped formations. Arcadia stomped forward, swinging her arms together, sending her wings of razor ice flinging past and through the rock doll.

The frigid cold and power of each blow crumbled the rock doll down into a pile of smaller rocks and debris ice. Arcadia bared her cute little fangs in big grin and pumped one fist into the air in victory. Breathing harder from the flurry of exertion, she laughed as she started back to Khione Glacier. She wore a proud grin across her young features.  The glimmer of pride in Khione Glacier's crystal ice eyes made it all worth it.

A mentor's critique followed just the same. Khione Glacier bellowed to her mortal daughter, "Very nice, very nice! You were excellent... right up until the point you slowed down at the end, little one. A real wizard or a real dragon will be hitting you back, not just sitting there like that rock doll."

Arcadia was still trying to catch her breath as she reached her foster mother's side. She sighed, "Aww, Mom. That thing woulda been hurting too much to fight back, even of he was real."

The great ice dragon chuckled, "Perhaps there is nothing more I can teach you with lifeless dolls alone.  Tomorrow I will ask the queen to lend me one of her marionette wizards, and you will see how much harder it is when the dolls hit back. I-"

Khione Glacier's manner suddenly went completely serious. They had a visitor. Arcadia couldn't see or sense them herself though. She glanced up to her foster mother, "Mom! What.. or who is it?" As soon as she asked Arcadia began to sense then catch sight of the long haired figure in the distance. It was coming their way.

Arcadia jumped and waved in excited greeting once she realized who it was. "Acnologia! Hey Acnologia! Ove-"

Her foster mother silenced Arcadia with one harsh reprimand. Arcadia! Calm down and be silent, little one! Wait back in your hut. Acnologia and I have a couple things to discuss first. I'll call for you when we're ready for you."
Taken aback by her foster mother's sharp tone, Arcadia reluctantly and quietly retreated back to her own little hut. From there she watched as Khione Glacier flew out to meet the figure of Acnologia. Gone was her earlier excitement at seeing one of her heroes. Instead, Arcadia couldn't help a certain sense of foreboding.

Arcadia snapped upright in her bed, her heart racing and head pounding at her temples. Thankfully, her headache faded swiftly once she awoke. It was that cursed dream demon again. It had not shown itself to Arcadia in months, but it had been haunting her by inducing the same old memory again and again, whether she was in deepest slumber or not.

Drying her faerie green eyes, she checked her iLac for the time. It was late, very late. Her eyes widened, wondering if she could blame that on the dream demon too. Arcadia threw her covers off, and hurried to wash up and get dressed. Checking her iLac more closely, she noted a few texts from the fairies at the reception desk. She really screwed up sleeping so late today, she had kept a new decor waiting. Dream demon or no dream demon she was not happy with herself for that.

Arcadia decided she would skip breakfast, and had straight over to the guild hall. Though Fairy Hills was just across the street, she brought out her dimensional scissors to cut open a portal from her room into the guild hall's main lobby. Her exit portal opened up beside the bar, and closed behind her after she had stepped out. She smile to the bar staff, "Watermelon and strawberry juice mix please."