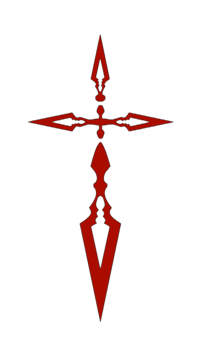 Description:
The first of the seven Gospels of Dies Irae, a spell fashioned from ancient, powerful magic and inspired by aggression and vengeance. The Gospel of Annihilation represents one of the ideals of Dies Irae, a spell designed solely to destroy those that dare oppose the righteous judgment of the guild. To cast the spell, the user gently touches their guild mark, the cross, along with their irises, flaring up with bright red color, an aura of incredible magical power appearing around them as they accumulating energy within their body, charging up the spell. This increases the user’s spell damage by 345% for the duration of the spell. For every post the user charges, glowing symbols of crimson color, resembling tribal markings, will spread further and further across their skin originating from their guild mark, the spell's power increasing by the spell's damage per post up to a maximum of 2.5x the spell's damage on the fifth post. The spell can be released at any point within the duration, dealing the charged damage. If the spell isn't released on the last post of its duration it will be released automatically, a red magic circle appearing beside the user to fire it off.

When the spell is released, all stored up magic power coalesces into a projectile of pure energy in blood-red color within one of the user’s hands, which is fired off at an enemy or area within the spell’s range at the spell’s speed, exploding into a massive burst of sheer force upon impact. This burst has a range of 1,000m around the point of impact, the explosion traveling outward at a speed of 800m/s, dealing the charged damage to anyone considered an enemy by the user. All those bearing the guild mark of Dies Irae and those considered allies by the user will be completely unaffected by this spell unless considered enemies.

"What shall I, frail man, be pleading?
Who for me be interceding,
When the just are mercy needing?"

Downside:
Range and speed reduced by 50% for 50% more durability. Sacrificing 2 base effects for 50% stronger buff

Description:
The second of the seven Gospels of Dies Irae, a spell fashioned from ancient, powerful magic and inspired by friendship, comradery, and the wish to protect. The Gospel of Perseverance represents one of the ideals of Dies Irae, a spell designed solely to protect those who follow the righteous path and safeguard them from any harm. To cast the spell the user accumulates magical energy in their right hand, which manifests as a quietly flickering, crimson flame, before dropping to the ground, touching it. Upon doing so, a pulse of magical energy is released from the user’s position, resembling a wave of blood-red flame that covers an area of 500m around the user at 400m/s. This wave affects only the user, allied members of Dies Irae and others considered allies by the user of the spell, leaving anyone and anything else completely unaffected.

Those affected by the spell, however, will feel warmth and comfort as the magic sweeps over them and leaves behind a red aura that surrounds their forms. The aura acts as a personal shield, able to deflect up to 1,890 HP in damage before breaking. The durability of this shield is restored to full at the beginning of every post as the spell is recast, the spell itself not breaking even if the shield is destroyed. Additionally, those affected will find their physical forms strengthened by the ancient magic coursing through their veins, increasing both spell damage and spell durability by 172% for the duration of the spell as well as granting the affected a counter piercing effects, effects that pierce shields and armors dealing 50% less base damage when piercing a shield or armor cast by or on the affected parties. Furthermore, someone affected by this spell can, once per post, negate a spell or ability along with all effects associated with it as long as it is within this spell's range around them and they pay the original MP cost it took to produce the spell.

"Worthless are my prayers and sighing,
Yet, good Lord, in grace complying,
Rescue me from night undying."

Downside:
Range and speed reduced by 50% for 50% more healing. Giving up 2 base effects for 50% stronger buff

Description:
The third of the seven Gospels of Dies Irae, a spell fashioned from ancient, powerful magic and inspired by bravery, virtue and undeterred persistence. The Gospel of Determination represents one of the ideals of Dies Irae, a spell designed solely to empower the members of the guild in their quest for righteousness and aid them in their fights. To cast the spell, the user folds their hands as if in prayer, a red aura that almost resembles smoke in appearance surrounding the forms of the user as well as every allied Dies Irae member and others the user considers allies within the spell's range at the spell's speed. Once the aura attaches to them, it will stick to their bodies for the duration of the spell, the red smoke following their every move and their forms blurring with the magical energy of the spell.

"O, what fear man's bosom rendeth,
When from heav'n the Judge descendeth,
On whose sentence all dependeth!"

Downside:
Giving up 2 base effects for 50% stronger buff. The user is drained of 10% HP per post this spell is active for 50% more damage

Description:
The fourth of the seven Gospels of Dies Irae, a spell fashioned from ancient, powerful magic and inspired by duty and discipline. The Gospel of Execution represents one of the ideals of Dies Irae, a spell designed as a tool to serve those who wish to aid the guild the most. To cast the spell, the user stretches out their hand, magic erupting from their guild mark which flares up in a bright red color, before focussing their magical power, a large, sanguine magic circle appearing beneath them. This increases their spell damage by 345% for the duration of the spell and enables them to materialize within the stretched-out hand a katana formed out of flickering magical power of the same color as the guild mark and the magic circle. In a strange feat of magic, the blade effortlessly cuts through all materials, a sword red as blood marking all those struck with it for a swift death. The blade can freely be de- and rematerialized at will for the duration of the spell.

This blade has multiple features that set it apart from others. Firstly, every strike with the blade deals the spell's MT damage to all deemed an enemy by the caster. Slashes of red light can be sent at opponents in the spell's MT range at the spell's MT speed in a wide, expanding cone simply by swinging the sword through the air, also dealing the spell's MT damage to those hit. Further, the user may also once per post teleport within the spell's Burst range, instantly reappearing at a point of their choosing within that same range. If an opponent is within melee range of where they reappear, the user may choose to unleash a single strike with the blade at their own movement speed, dealing the spell's burst damage. The spell may only deal either its MT damage or Burst damage in a single post, not both.