It's Been a Long Time Coming

It's Been a Long Time Coming 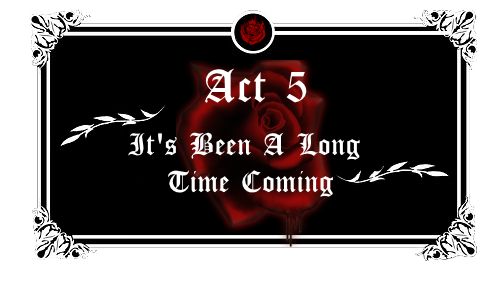 Job info:
Job Title: In the Eyes of the Bull
Rank: C
Job Location: Anywhere within Fiore
Solo Word Count: 1500 words
Additional Requirements: Must be done solo.
Job Description: Rumours have found Albafica's ears, speaking of a giant, hulking man roaming the east of Fiore. The way they describe his appearance and outfit alike match those of one of his old master's, Aldebaran, a man Albafica presumed dead. He sets out to find this man whom everyone mentions, in the hope reuniting with one of his old masters once again.
Enemies: N/A
Reward: 10k jewels and C-rank exp

Re: It's Been a Long Time Coming

Albafica found himself at a loss. Once more he found himself alone in this world, with no-one to call his friend, and nowhere to call his home. Nightmare had disappeared; disbanded so quickly after he'd joined. Yuiisai had somehow managed to slip from his grasp, making him to lose his supposed twin. The very reason he had joined Nightmare was to protect her from harm, so her disappearing had been enough reason to leave the guild as is, for none had truly gotten his interest in the time he was there. The former guildmaster had piqued his interest, but had chosen to leave this world behind for another realm, which irked the young saint greatly. In his eyes it downright bordered to betrayal, to leave his own guild behind without a mere word, and had made Chaoris fall from grace to him. Similarly Mythica, his successor, albeit rumors claiming her to be even more powerful than Chaoris, had never shown her face to him. So said power were only rumours in his eyes; her disbanding the guild a sign of weakness. And if it was one thing he did not like, it was this weakness. The azure-haired boy growled softly as he made his way down the cobblestone road leading into town. The thing that had gotten him to move had been during the fight after Nightmare's disbanding. Albafica had decided to tag along with the mages of a guild going by the name of Crimson Fang. Not out of cheer interest of joining the guild, but more out of boredom and having nothing else on hands. Safe to say they boasted their strength and bravado, but in the end the Rune Knights defeated them fairly quickly despite the dark guild's overwhelming numbers. Him included. Albafica had managed to make his first kill before he was taken down by a man with such power that even the very thought of it made him shiver in excitement. After all this time, he had been looking for the right person to follow in the wrong places. Despite having stood on opposite sides during said battle, that man was the one he wanted to swear his undying loyalty to. And as such, he would.

It was the very reason he'd strayed from the shadows and was now venturing into towns and cities in hopes of finding out about this man’s whereabouts. In all honesty Albafica greatly disliked going into crowded places due to the poison in his blood. If he remained around people too long they’d become affected, and if he had a wound upon his body that would leak any of his blood, the consequences could be even worse than just that… they’d be lethal. Only people that greatly outclassed him, or carried a poison immunity were to survive, but there were little of those present at current. Only Sayrn, the one who recruited him into Basilisk Fang back in the day had been immune, and thus survived. But that had been a long time ago. Too long. Lost in thoughts, Albafica had yet to notice that he had ventured into the town’s walls and unto the main road, all until a specific set of words caught his attention. He stopped dead in his tracks and turned around, staring at a group of men busily talking. Did they just mention golden armor…? Without hesitation, Albafica headed towards the group.

“Excuse me, what were you talking about?” He asked the man as he tapped him on the back. He would've reached for the shoulder, but as it was now his lacking height prevented him from even reaching that part, so he had to make do with other ways of getting the man's attention. The man, quite literally several feet taller than him, turned around and looked at the young boy before him. “What?” he replied, not having heard Albafica's question. Albafica frowned shortly, slightly taken aback by the sudden hostility in the man's voice; but it looked like once the man had realised it was just a child in front of him, had changed his expression to a kinder one. The azure-haired mage, actually an adult stuck in a child's body, decided to play the con card instead, and got his act up. “Sorry mister, but I just overheard your talk and it sounded really cool, so I wanted to know a bit more about it.” Albafica replied in turn, blinking overly cutesy while working the man’s heart with his big, innocent eyes. The man looked down at the kid and ruffled his hair. “Well kiddo, it might not be a story you want to hear. You could find it scary.”

“No sir, I'm a big boy! I don’t get scared that easily!” Albafica exclaimed, folding his arms across his chest and largening his stance to appear tougher. The way a child would do. It gave him a hearty laughter in return from the group of men that had been talking, which was enough proof for Albafica to know he'd done well in convincing them of the part he was playing. If anything he'd already lowered their guard and wrapped them around his tiny little finger. But in all honesty, he hated acting like this. Lowering himself to get what he really needed, merely because his current physique couldn't handle a bunch of grown ups, let alone threaten them. Resorting to underhanded tactics just as these were well below his standards, but in this world you had to make do with what you had. And at this point, that was his adorable appearance, looking more like a whimsy girl than an actual boy on top of that. A gift, yet also a curse. Luckily one he knew how to take advantage of.

Re: It's Been a Long Time Coming

“Well then, tough boy, let me tell you a story! They say that in a village deep within the mountain a giant lives, clad in gold with giant bull-like horns. And that whoever tries to get close to the village will meet their end before they can even set foot within the village. It allows you to leave if you're in the town, but never to return, unless you wish to pay with your life.” The man’s voice had changed into a deep, dark whispering, like one would if they were telling a horror story and just reached the horrifying end. Albafica was rather inclined to roll his eyes at the man for trying, but repressed the urge, instead letting out a well-played gasp and appearing frightened to the man. By the man's reaction the azure-haired mage saw he'd struck gold, the glinster in his eyes and the sudden outburst of laughter only added to how right he had been; they'd fallen for his scaredy cat act. The man rose again and patted Albafica's shoulder, squeezing it softly. “But that's enough scary stories for you, little kid. Now move along back to your mom and dad, and don't forget to be good, or the golden giant might get you!” he laughed, gesturing for him to leave. Albafica did as told, or rather, as he needed to to keep up his act and ran off into the crowd, waving his hand at the man. Once he was out of sight, he stopped running and shook his head, a scowl visible on his face. ”Idiot… at least you proved to be useful to me in the end.”

At least the hints had been clear within the story, to him they were the indicators he needed. Location? Mountain Village. Target? Taurus Aldebaran, one of the twelve masters that had bestowed their legacy upon him. How he did know it was in fact him was easy; the description, despite vague, had been crystal clear to Albafica, and most-likely anyone out there that knew of the giant Gold Saint’s existence. Aldebaran was far taller and bulkier than many a man on Earthland, easily going past 7 foot in height, he wore a golden armor at all times, one that fitted tightly along his physique, and his helmet resembled the horns of a golden bull. That was Aldebaran. The rumors about him not letting anyone pass towards the village had a deeper meaning, especially towards the identity of the group of men that told him about the story. The Gold Saint was protecting the village from thieves and raiders, so of course they would not be allowed to set foot inside the village. Aldebaran was powerful enough to keep hordes of them at bay without even batting an eyelash if he were to get serious; and lying about their intentions was out of the question, as he could easily see whether they were truthful or not. It'd be easier for them to spread false rumours of a giant keeping the villagers hostage; send some powerful mages to deal with him so they could go about their usual business again. Albafica grinned. Perhaps he could use this to his advantage as well… two birds with one stone. His next destination was clear; Mountain Village.

The trip towards the village had taken him longer than expected, but after two weeks the mountain and vague silhouette of the small town against its flanks. The sun had been creeping up ever so slowly and cast an orangy haze across the scenery before him as it rose towards the mountain's peak. Something reflected a light within his eyes, causing him to flinch and cover his face, staring off into the distance. Like the rumors had said, a tall, hulking figure stood several hundreds of meters before the village, arms crossed and shining in a golden hue. Albafica smiled brightly at the sensation of the man's overpowering, yet familiar magic.

Aldebaran's voice boomed over the road, his eyes still closed and his arms folded across his chest. ”State your intentions, stranger, or leave!”

Albafica lowered his arm and slowly let his magical power surge up around him. The azure-haired mage's smile was apparent on his face as he eyed the giant man. ”It's been a while, Aldebaran…”

He could hear how the armored man moved about, unfolding his arms as two pair of eyes stared at the youth in front of the large warrior. Aldebaran's voice was filled with disbelief, and at the same time, a tinge of happiness. ”Albafica…?”

He had finally found one. A survivor.