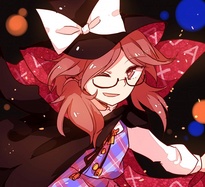 Alice Goodwill
Guildless {} D-rank
Word Count: 561/1000
Tagged: @Ilda Nora
Muse: Probably going to be better after tests ewe.
Music: Child of Magic 2013- Nintendo
Haven't used a template in a long time, it confusing ;3;
Tip Tap, Tip Tap. The sound of her little shoes treading the ground echoed in her head as she jumped about. Her cape flew into the air with each spin and turn, her hat barely managing to keep itself in place as she made her way to her next show. A ward of children that are bored off their minds for god knows how long, and she would be paid well for it, there wasn't a better opportunity out there! And hey, if she asked nicely enough, maybe they would give her something to snack on.

When she arrived at the request place, she went to speak with the job provider. And oh boy, her face when she heard that someone was already performing to the children. The grief, the sadness! Even if she was quite defeated at this point, she would at least go see what the one who got her spot was all about. Maybe she could learn a thing or two.

But when she got there, she saw someone that clearly wasn't prepared for the job. She had to go help her, or else this could go poorly real quick, real fast. Readying her hat and cape and putting on her best smile, she took a deep breath, before shouting deep from her lungs. "Laaaaaaaadies and Gentleman, tall or small, the real show has arrived!"She jumped towards Ilda, grabbing both her hands and shaking them comically. "I'm most thankful for your job in entertaining our viewers while i didn't arrive, my dear assistant. Now, if you may help me..."

She turned to the crowd, before reaching into her hat, and started to pull out a white rope... And kept pulling... Until there was a big pile of rope in the ground. She grabbed some of it and went towards Ilda, smirking. She had something very mischiveous in mind, and Ilda was the centerfocus attention of it.
IVYLEAF33
Ilda Nora

Alice Goodwill
Guildless {} D-rank
Word Count: 1234/1000
Tagged: @Ilda Nora
Muse: Probably going to be better after tests ewe.
Music: Child of Magic 2013- Nintendo
Also know as i don't know how to rp my lineage :V
She froze for a moment when Ilda asked for a introduction. Oh god, how careless. She had forgotten about the most important part! She smiled nervously for a bit, before clutching her head in pain for a moment, stumbling a bit. "Ack, not now..." She whispered so that the children couldn't hear it. She then looked at Ilda and stopped cluthcing her head, shaking it around a bit as to try and gain focus. "Hate when these weird thoughts come into my head..." She said, before turning to Ilda with a smile on her face.

Closing her feet together and striking a pose, she spoke in a "trying too hard to sound cool" tone, tipping her hat. "As my great assistant, the Indomitable Ilda Nora said, one must present themselves to their audience..." She winked at Ilda before skipping to center stage, opening her arms wide and shouting. "Blink and you'll miss it, snooze and you will lose it! The true form of entertainment can only be presented by yours truly, the one and only... She did a spin, before striking a pose. Magician Extraordinaire Goodwill!" She said, before giving the audience her biggest smile.

After that was done with, she went back to Ilda and grabbed a piece of rope, before going behind her and put the rope around her neck, so that the ends would be in front of her. She then went back to face her and said "Now now, I know my assistant isn't the best entertainer, but she tries her hardest. Yet, sometimes..." She grabbed the ends, and did another loop around Ilda's neck, albeit doing it weirdly fast as to hide something. Now, with both ends in her hands, she grinned. "Even I want to choke her..." She said, before pulling hard on the ends as to choke Ilda.

Yet the logical thing didn't happen, and instead, Alice was holding the rope straightened up infront of Ilda, as if it had gone clean through her neck. She showed the rope to the crowd, who reacted with both shock and surprise. She then turned to llda and whispered. "A simple trick, really, but we don't need more than that." She then turned to the crowd, smirking. "Guess you can say... She always has me at the end of my rope!" With a horrible pun to finish, the children start to laugh and smile, which visibly brought a lot of joy to Alice.
IVYLEAF33
Ilda Nora