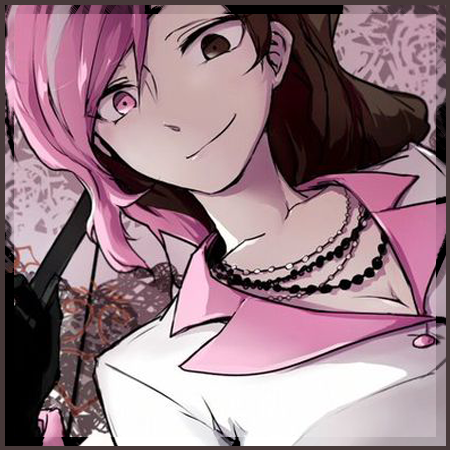 Well, this was annoying.

There were few things Aeron hated more than waking up in a strange place that she couldn’t remember visiting, which was infuriating to her because it happened all the damn time. Today, she found herself in some city called Rose Garden, which was an absolutely ridiculous name for a city in her opinion. It was an irritating hub for tourists, who lined the streets by the dozens to shop and sightsee.

The woman growled low under her breath to herself, walking with her hands in her pockets and her shoulders slouched like any other stereotypically antisocial person that didn’t want to be noticed would do. Her pink and brown hair hung half in front of her face, shielding it from view. Beside her walked a beautiful woman with long black hair and amber colored eyes. Her looks were matched only by the sinister smirk that rested on her lips and betrayed her for the vile bitch that she was.

Aeron hated Thana, but couldn’t seem to get rid of her. Everywhere she went, Thana was there causing trouble and drawing attention to them. It was an unfortunate reality that she would never be free from her psychopathic counterpart, however, as they were both two fractions of a personality belonging to Trinity, whose body Aeron was currently controlling. Or at least, that’s what Thana insisted to her. There was enough oddity in her life that Aeron had to at least begrudgingly accept that it was possible, but unlike Thana, Aeron was not actively aware of the identity that served as the host of their body.

A noise drew her attention to the town square, where a larger group than usual was gathered. “What’s going on over there?” Thana asked curiously.

“Don’t care,” was the gruff, muttered response. There was no way she was going anywhere near that group of rabble.

“Aw, you’re no fun. Come on, let’s go find out.” Thana started walking off in their direction without even waiting for Aeron to reply again.

Another growl rumbled in her throat. “Damnit, Thana..!” She stormed after the other woman irritably and stood there in a huff of anger as Thana attempted to get someone’s attention to ask what the crowd was gathered for. However, since Thana was technically a hallucination in Aeron’s mind, no one acknowledged her. This only served to make the dark haired woman angry, as she did not like being ignored.

Finally, unaware that no one else could see the frustrating woman that was always tagging along with her, Aeron grabbed a man roughly by the shoulder and spun him to face her.“Hey, can’t you see this woman’s trying to ask you a question?!” she asked, pointing toward Thana.

The man looked at the blank space and frowned in a mixture of confusion. “Uh… s-sorry?”

“Whatever, just answer the question. What’s the line for?” Aeron mistook his confusion for an apology, but the man sensed that there was something a bit off with the woman in front of him and wisely chose to just roll with it.

“Passports. Fiore just opened borders with a couple of its neighbors, and they’re letting people travel in and out of the country.”

She rolled her eyes. “Oh please, what possible reason do we have to get a passport?” Aeron asked, disturbing the man greatly as he witnessed her talking to herself.

Thana raised a brow at her. “We’re always on the move. Wouldn’t it be prudent, should we ever choose to cross the borders again at some point, to be able to do so without hassle?”

There were few things Aeron hated more about Thana than when the woman was right. “Fine.” She looked away from the other woman and noticed the guy still staring at her in bewilderment. “What the hell are you staring at?” she snapped at him. He jumped and stuttered another apology, turning around and minding his own business again.

After waiting in line for a solid hour, she finally had the passport in hand. Tucking it into her pocket next to her iLac, Aeron walked away and made for the town’s nearest exit, eager to put Rose Garden and its droves of people behind her.