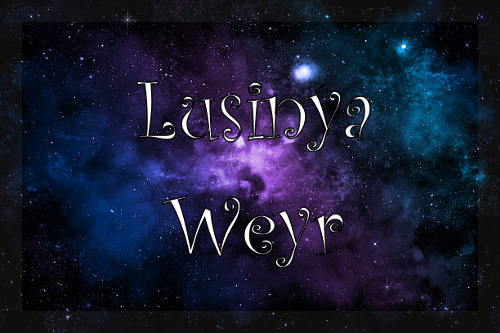 Amid the thick jungles of the Southern Continent lies Lusinya Weyr. Both the envy of and the bane of the North, Lusinya is liberal, rich, and well-established. Sure, their seaside port of Belior might have a bit of a pirate problem, and the new Pass began in the worst possible way: in the middle of a Hatching. But in all, the first Turn of the Pass went as well as could be expected.

As they settle in, all expectations point to things getting easier, but how will that go?

Our youngest gold, Dunecaith, will be having her first clutch during the upcoming OOC spring, and in addition to Candidates, we need to fill up our ranks with some bigger dragons to chase the golds and fill up the ranks.

Lusinya has been prospering well under a consistent Senior Weyrwoman and Weyrleader pair, but that’ll change all too soon.... The Senior Weyrwoman is on the plot chopping block, but who will replace her? The ditz that no one trusts with responsibility? The young, sophisticated holdbred? Or the upstart loudmouth? Perhaps a transfer from the North, even? Join us, and help make a decision that’ll affect Lusinya for Turns to come!