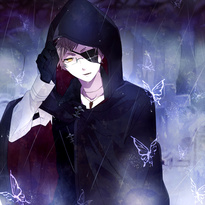 Magic Name: divine light and demon takeover (The name of this magic).

Magic Type: caster, takeover (What type of magic is it, Caster, Holder, Takeover, etc. be sure to note which magic type is what in this category.)

Description: caster is a divine magic that blinds enemies and burns them from the inside and out and purges them while takeover turns him into a demon that puts fear into peoples hearts and in later stages will be able to absorb nearby magic for a certain period of time to become stronger.
He uses his divine magic to protect people and help out while the only way he can use his demon form is if he gets really mad. (Describe your magic in detail: First being a description of what the magic he/she is using, and then a second paragraph of how he/she uses it.)

Unique Abilities: Demon form: when he turns into a demon he can absorb all magic attacks and use them but only for a short amount of time. while in demon form he also puts fear into the enemy's hearts because they see illusions of there past sins and a great demon laughing at them for it.(List the abilities it provides, make sure to separate each ability! Abilities are like passive traits, or a hidden power that can be activated for a very limited amount of time. These abilities are Unique to your characters specific use of the magic! As a starting D rank character, you can have 1 unique ability.

Spells: As a starter character at D rank, you start off with 4 spells.
« View previous topic · View next topic »