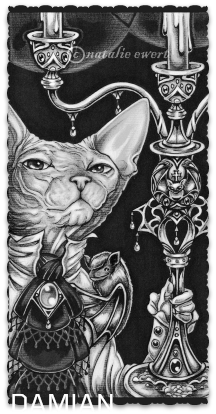 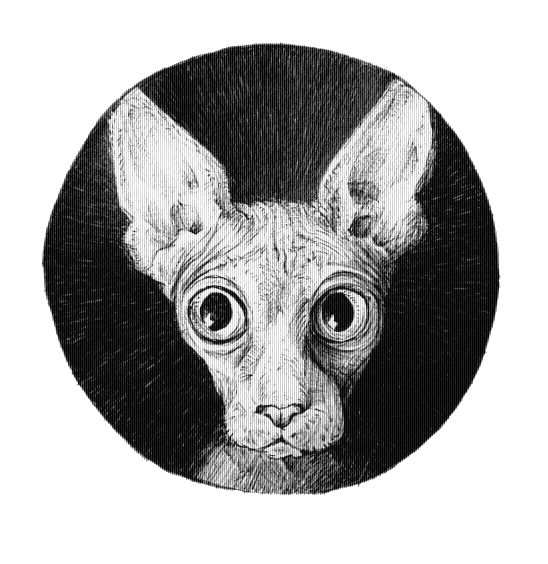 
It began with the ever-dread pulse, a surge of pain rapidly coursing throughout his frame. Atop his bed he jerked into a fetal position as his blood boiled within; the entity known as D now out of patience. Damian rolled to the ground, landing with a thud as he continued to wretch, writhe, and wriggle in pain. He knew time was of the essence, he knew D yearned for food, but he couldn't feed the Demon; otherwise he'd lose his home...and that wasn't an option.

"I've grown tired, boy..." D's voice was low and shaking, displaying a slow-burned rage "I've waited patiently while you frolicked with the delusion known as your "family". I've shown you mercy for disobeying my orders countless times - however, I shall wait no longer." Damian's eyes began to shift slightly, a redness consuming it's entirety as he struggled to push him back. "Please, don't do this! I will feed you, I promise!" He continued to plea as D's power grew stronger; Damian feeling his power fade. "I've got to...warn them...." His body fell limp for a few moments before jerking and stretching about;  The Red-Eyed Demon now assuming his rightful position as host.

"Now then...who shall I feed on fir--" he found himself rudely interrupted by the chime of Damian's iLAC; the notification reading "HEY, ROOKIE!". Upon clicking it, a wicked smile crept about his visage as saliva rapidly gathered and dripped from his teeth.

SENDER: UNKNOWN
MESSAGE: HEY, ROOKIE! YES, I AM TALKING ABOUT YOU! YOU HONESTLY THINK YOU AND YOUR LITTLE FAMILY ARE TOUGH? WELL YOU AREN'T SHIT IN FIORE, YOU HEAR? AT LEAST . . . NOT UNTIL YOU'VE HUNTED A REAL MONSTER!. . . YOU MIGHT NOT THINK IT NOW BUT I'M SOMETHING OF A BIG DEAL AROUND HERE AND I'VE GOT EYES EVERYWHERE. HEAD TO THE HAUNTED GUILD AND SLAY AT LEAST ONE OF THE BEASTS THERE; MAYBE THEN WE'LL SEE IF YOU AND YOUR FAMILY CAN'T START MOVING UP IN THE WORLD.

Wickedness exuded from his pores, a malicious aura engulfing the vicinity as he gazed at the phone whilst licking his lips.  In truth, he didn't give a damn whether this had been a trap or not. Regardless of who showed up to The Haunted Guild, someone - or some thing was getting consumed. He could only hope that his prey wasn't the type to fight back; D never could stand insubordination.

Death and despair blanketed the skies as a stench enveloped the vicinity, the crunch of Damian's boots bursting through silence. "Interesting . . . " a light purr escaped his maw as his tail swayed happily in the breeze. Clearly the surrounding area had been abandoned prior but . . it was almost familiar to The Demon; perhaps he'd fed here before? Who could tell for sure. As he approached the entryway to the Guild, his eyes suddenly jolted back as an insanely strong presence crept up behind him. Whomever it was, it was capable of crushing him with a finger. As badly as he wanted to feed . . he would have to find a way around this first.

It was shaping to be just another regular of the mill evening and night. Leila, the silver-haired maiden and ex-guild master, as well as Goddess of Ishgar,  was quietly walking among the regular people of the village. And how come someone like her was not constantly surrounded by crowds of adoring fans? Quite simply, the girl just suppresses her magical energy for the most part and wore a long leather cloak with a hoodie which completely concealed even her rather a unique form. It was for the best anyway. And at the very least, her loving companion that walked by her side did not have to be hidden anyway.

Melon, the green, and red-furred wolf were by Leila’s side for a while now. But never when she was in the public eye. It was to ensure that the lively pup could go on unrestricted. Even right now, as the Sun was slowly setting, the beast did not show any signs of tiredness. Honestly, even the girl sometimes envied the creature’s levels of stamina. In fact, she was so infatuated with Melon right now that she forgot to pay attention to where she was going, resulting in a slightly unfortunate collision with a man headed in the opposite direction.

Thankfully only their shoulders brushed against one another, resulting in little to no actual damage dealt. Though in that one brief moment the girl noticed that the person she had bumped into appeared rather distressed, sweat pouring down his face. He uttered not a single word and continued on in a hurry as if he was running away from someone. Though a quick peek revealed no such pursuer to be present. Instead, it seemed that the boy had dropped something during the collision, a piece of paper that Leila had picked up with the intention of returning it to him.

Though a quick glance at it actually swiftly changed her mind. It was a parchment issuing a challenge for the young boy, one to slay a powerful beast in the nearby haunted halls of what used to be a guild. It explained why he was in such a hurry in the exact opposite direction, especially if he was just a novice mage. On the other hand, a small smile flashed across Leila’s face as her eyes wandered to the side, eyeing Melon for a bit. She didn’t have to say a single word as the wolf barked in affirmation.

And just like that, a boring evening had turned into a night of hunt. Once far enough from the village, the girl even let her magical energy flow freely, the power now able to be sensed by beings around her. It was actually a bit tiring to constantly try to restrict herself in such a way. Perhaps she should try to put together some device that would allow her to hide her magical signature more easily. After all, she was once a leader of a guild that greatly focused on studying magic and creating devices that worked with it.

Lost in thought over the idea, she didn’t even realize that she was closing in on the guild. And not only just that but also another individual. It was Melon’s sudden bark that snapped her back, realizing that she stood only a two dozen or so meters away from someone… a humanoid creature but definitely no actual human. Here in the accursed lands of all places, a bit suspicious. Quickly growing much warier, she decided that she should figure out who he was before making any other decisions.


[Seconds passed as pressure began to violently push his form, a wave of intimidation rushing toward him. He couldn't display fear - however, unlike Damian's (and his farce), he'd been fully capable of feeling it.  He knew better than to meet this threat with hostility; the quicker he gets knocked out, the quicker Damian assumes control. He'd been locked up too long for it all to end now. As such, he deemed it necessary to speak with caution; looking for any possible weaknesses to exploit for further use.

"D". His manner of speech was sharp, precise, and without subtly. "As it were, I'm currently on a hunting trip." He paused, his eyes narrowing as his form stiffened "Judging by the massive power surging from you I'd assume you are too; can't assume it'd be for little old me." His eyes darted to the mutt before him, knowing that it wasn't the type to just sit and watch; he was clearly outnumbered, he would've had to surrender before the fight could even begin. Taking confidence in his decision to take the safe way out, he proceeded with the possible negotiation. "So what are you here for then?" His eyes widened as he recalled the message "You must've gotten the call about defeating the beast inside the guild, is that it"? He needed to gain some kind of idea with what he was dealing with her. Despite her rather frail and soft appearance, he could only see her for the monster hiding beneath the flesh;' she was a problem.

Being introduce with just a single letter sounded more like a nickname than an actual name, but Leila grew someone accustomed to such things, so she questioned it little. In fact, there were many times when she herself used a fake name. Though that was a bit impossible these days due to her now lost position as one of the top wizards saints. Just about any educated individual knew who she was, at least partially. Unless one was completely uninterested in the world of magic, which some indeed were. But back to the topic, Leila looked this individual over as she started walking a bit closer.

Though she certainly wasn’t appearing threatening in any way. And appearances were not deceiving in this case, as she did not plan to do anything either. That said, there was something that caught her attention. And so she asked, rather nicely, too. “The way you said that makes it seem like there could be a reason I would be out here for you. So, is there one?” The girl was pretty good at making her words sound completely normal and non-threatening. She even looked around and continued. “But not really. Could say I’m just having a walk, though I have heard about the challenges…”

She wasn’t even lying, considering the fact that she picked the paper off the ground after the actual mage who was challenged dropped it. Though the news were troublesome to her, as she didn’t want any young and inexperienced mages getting hurt because of some prankster. “So you’re on the hunt then? Allow me to accompany you, I’d like to see if this monster is real. And if it is, how powerful it is.” Protecting a mage like D from some monster should be easy enough. And hey, it was always nice to have some extra company, the girl thought.