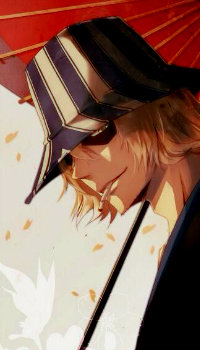 News of Rose Garden's so-called 'cherry blossom flood' had spread across Fiore, it only took mere moments for a job offer to be posted, seeking desperate help for anyone to sort the situation out. With quite a huge interest in the phenomenon at hand, Yasei made sure to take the job for himself. Of course, he asked around the guild for anyone who might want to accompany him for the task. Surely enough, he was able to find someone willing to tag along. Gaia, of all people. As far as he knew, she was one of Sabertooth's Aces. Why she, a renowned mage of their guild, wished to tag along for such a menial task was beyond his knowledge, though who was he to question her reasons.

After taking some time to prepare and some more to coordinate with his companion, Yasei finally decided to go and venture towards the location in question. Even from far, it was evident that something odd was taking place, however, it is quite the majestic sight. An isolated rain of pink cherry blossom petals rained down on the area. He couldn't help but feel mesmerized by such a wonderful display. He was, after all, a sucker for all things in nature.

He looked over towards Gaia with both brows raised, excitement was evident from his expression despite how mellow it might seem. He was filled with pure enthusiasm to meet whoever was responsible for the ongoing 'pink rain'. "I don't find it problematic at all, well, I guess that's just me." He said, followed by a light chuckle as he entered Rose Garden along with Gaia.

"Shall we then?" He inquired before taking any step further. While he may want to know who's responsible, a job's a job, and while he may not want it to, he'd have to stop the 'cherry blossom rain' as expected of him.

Gaia had heard about Rose Garden suddenly having cherry blossoms again, and was hoping it wasn't the truth at all. She had just gotten into the guild hall and was approached by one of the newer members, making her simply smile as he asked her to accompany him, in which she felt she should, especially after hearing about what was going on in Rose Garden. Even though she was trying to keep her composure, she kept on mumbling under her breath about 'that woman better not be back' or something similar to that. She smoothed out her purple skirt and adjusted her light purple top after pulling up her stockings and making sure she was ready to fight. She donned her cloak and bag while carrying her favorite weapon. Ryaqold's Staff. Of course she couldn't not use the things her cards had given to her. She even remembered the first time she got this staff... it was the first time she had come across this cherry blossom mage.

As they approached Rose Garden, Gaia's face snarled a little. She couldn't like how 'pretty' the scene was again. Not this time. She clears her throat. "Get out of here fast! Before you're smothered by cherry blossom petals!" She calls out to people. Few actually listened to her as she walked on with Yasei. "I'm going to have to advise you to not think it's not a problem... If it's what I think it is... I've unfortunately dealt with this... woman... before..." She mutters as she grips her staff harder. She walks forward and closes her eyes. She pulls out a card, and whispers to it before a shimmering two-tone purple/red female dragon holding a staff-like walking stick came out of it. A light was created by the staff the dragon was holding, and Gaia frowns as she looks to her. "You best not be wasting my time... girl..." The dragons says just before a group of four plant people dancing among the petals dancing. Gaia snarls once again as she looked to Yasei. "Please... keep your eyes out for petal dancers and minions. They'll do everything in their powers to keep us from moving forward." She tells him as she glances to the dragon. "Also, this is the Fire Queen Sirroa, she's feisty, so don't let her touch you with her magic." The dragon seemed to smirk at that introduction before she holds her staff out and a plum of fire is shot from the tip of the stick. The fire seemed to be rather hot as it stayed in a condensed area, burning the petal dancers to ashes.