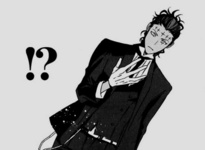 Veil sat on a mahogany chair in a nice looking gentleman's club. Not the adult kind but the old school kind where men of class would come and talk, drink expensive wine, discuss the world, and read the paper. The young mage while not allowed Alcohol was sitting in his comfortable chair, a glass of Orange Juice next to his arm and a newspaper in his hands. Several names of guilds including his own had been mentioned with fervor. As he sat he noticed a middle aged weed of a man who was clutching a bowler hat in-between his hands and walking back and forth. He also couldn't help but notice the way the man's eyes kept flicking in his own direction.

Shrugging it away, he turned back to his newspaper and moved to the economics section. Occasionaly they would mention a magic artifact they have found in this section that was to be auctioned off and Veil loved a good magical artifact. A slight throat clear made the young mage look over his paper at the bowler hat gentleman who had approached him. Up close it was obvious this man was the skittish type. His clothes while nice had a slight disheveled look to them, his shoes were scuffed and his bowler hat brim was bent out of sorts. His tie while clean and stylish was disheveled, not to mention the sweat on the man's brow and lip. His mustache a pencil like thing quivered as he looked at the door to the Club.

Veil assumed the Mark the man was referring to was the Silver Wolf guild mark visible on the right side of his neck. With a warm smile, Veil folded his paper and set it aside. The young man was dressed in a fashionable three piece suit of dark black suit with a white undershirt and a dark green tie. Against the side of his chair rested a black cane with a silver wolf head as the grip, though the head was impossible to see due to the black top hat that rested on it. This left Veil's shaggy red hair to fall down to his shoulders unecumbered. Dark green eyes sized the man up behind half moon spectacles.

"I am a member of the Silver Wolf guild yes. How may I be of service?"

The young wizard had a idea as to what the man wanted. Simple deduction was it was late at night, the man while one of wealth was skittish and scared. Now if that was because of the dark or from a enemy was yet to be determined, but seeing a mage in his vicinity he approached for help. So, logic concluded the man wanted an escort to his home.

"I would like to pay you to escort me to my abode, I pay excellent wages."

Veil smirked, nail on the head his master would have said. Reading people was about details and this man was an open book. Anyway, Veil was about to leave himself so he could be on his way and make some Jewel as well. And it also made the guild look good if one helped a man of means.

"Of course my dear fellow, be glad to do so. Shall we be off?"

Veil stood, snatching up his top hat and placing it on his head before grabbing his cane. The skittish man nodded and quickly followed Veil outside. The night sky above was cloudless and open, stars twinkled on the sky like a painted landscape. The moon was a sliver of a thing, a simple light for two travelers on the road. Veil watched the man out of the corner of his eye, never knowing what might happen was best to keep an eye on the client as well as the enviroment. The man did not choose to speak so Veil decided to walk in silence as well. The only sound coming from the tap tap tap of Veil's cane on the sidewalk.

The street corner had a pair of guys who leaned against the light post. Their eyes were blood shot and reeked of booze even from the several feet between them and the approaching pair. Veil gave a soft tap to the man's hand to point out the men. Without a word the timid man moved behind Veil as a shield. Normally Veil would have called the man on his cowardice but honestly he didn't see the reason to do so. The man was not a warrior and probably had never had the need to lift a weapon, besides it made money for mages like himself.

"Hey boy, why don't you come over here and we can talk, see what you are carrying."

Veil chuckled at the weak attempt of robbery. His cane came down hard, a magic circle forming in the air above their heads.

"This is where you run away, gentlemen."

Without fail the two men took one look at the magic circle and ran away down the street. Veil chuckled and looked at his client.

"Don't worry, they were all talk."


The pair soon entered a nicer part of Hargeon town and turned down a side road. The man eagerly pointed to the roof of a house a block away.

"That is my home, once we get there the two thousand jewel is yours."

Veil nodded and figured it was good money for the walk. Turning the corner without incident and they found themselves looking at four men who were standing in front of the wrought iron gate, their eyes locked on the house. Veil turned to the man who was staring at the four in confusion.

The man shook his head quickly, he knew how this would look to the young mage. Four men waiting outside his house just as they arrived could be interpreted as a set up.

"I assure you I have no idea who these men are!"

Veil gave a slight shrug, now the men had noticed them and the skittish man who's house they were looking at. One elbowed his friend and he responded with a nod. The four spread out and walked forward.


"Hello boys, my friends and I were hoping you could give us a donation to our nightly escapades. You richlings have so much so I am sure a mesely hundred thousand jewel for us not to bash your face in is worth it."

Veil tilted his head slightly, like chain lightning his cane whipped out, The silver handle smashing into the nose of the Bully, the second blow was a whip like motion to his groin, followed by a snap strike to the back of the neck. The bully hit the ground like a sack of potatoes. His friends stared then looked back in anger. Veil was already gone, moving around one of the smaller enemies, He struck the back of the man's knees causing him to fall onto them. Veil spun, driving his knee into the mans temple and sending him sliding. Ducking under a wild swing of the third man, his cane struck the solar plexus of the would be robber. Coming up with a uppercut that smashed the man's lower jaw and sent him into the air, then back to the ground on his back.

The last bully rushed forward yelling, arms outstretched and eyes full of rage. A quick jab to the left eye stopped the man's momentum. Then came the onslaught. The silver wolf ornamanet was a blur as it struck the man over and over. Hitting joints, pressure points, and weak spots throught the man's entire body. Finally, Veil stepped back and the man was allowed to fall to the ground unconcise.

Veil looked over at the man who stared in awe at the ease the young mage dispatched the four men. Without a word Veil simply held out his hand. The man quickly pulled out the two thousand jewel and placed it in the fourteen year olds hand. With a nod, Veil walked off. A whistling noise coming from his direction and the glint of moonlight on a spinning cane of a young mage vanishing into the night.