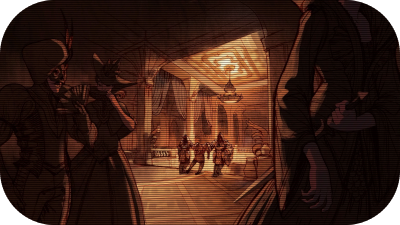 NOTES:
I suggest separating into two groups of two. One group explores the Hall of Valor and then the Servant's Wing, where they then find the missing artifact and the information tied to it. The other group tours the ballroom, and then investigate the Royal Wing (both the bedchambers and Grand Library). *The time limit is not enforced but you should write with a sense of urgency in your posts. If you want, you can set it up so that once everyone meets their word count, they must return to the ballroom within an additional 1000 words or be late (and suffer consequences), instead of it being written in at the players' discretion.

ENEMIES:
None, yet. Beware of your actions in court. You may spur the vices of powerful nobles.