Two sides of one coin

Two sides of one coin

The stamping of a trotting horse was heard within the misty wood. A rider appeared out the fog between the hanging trees that adorned a muddy path. It was clad in mail and above it, he wore a black tattered sure coat with a deer skull emblazed on it. Blue eyes glow eerie within the sockets of the masked helmet, lighting up parts of his face. The skin was pale, and his white hair looked like brittle. A ragged mantel was attached to his shoulders, it ends fluttered behind him as he rode in a steady pace. His horse was pale, with red eyes and yellow foam dripped from its mouth as it shook his head once in a while. A heather shield hung on the left side of the horse, black with the bone-white deer skull. On the other side was an ominous large axe, one you would suspect was used by an executioner.

Godfrey was on his way to his men, whom were encamped somewhere in the spooky forest. He had left them behind when he searched for the river Styx to find the crossing to Hell. In Hell, he had visited Lilim and sealed an alliance and was given a stay on her estate. His men were also allowed to stay and therefore he had to pick them up. He had left them behind to lay ambush to any pursuers from Pergrande or any who were interested in the bounty upon his head. He had encountered Pergrande knights before, the zealots they were. They came to give him divine justice for the crime of kin-slaughter, usurping, for bringing the plague to the real and for the use of magic.

The earth shook and out of it an arm of sorts arose and engulfed Godfrey and his horse. The latter screamed in anguish and fear but soon the sounds faded as they were pulled underground. Deep into the abyss until the ground spewed him out. His horse laid dead beside him, not in the misty woods but within a plain of dead grass. He stood on what would be a battlefield, two armies stood on either end. 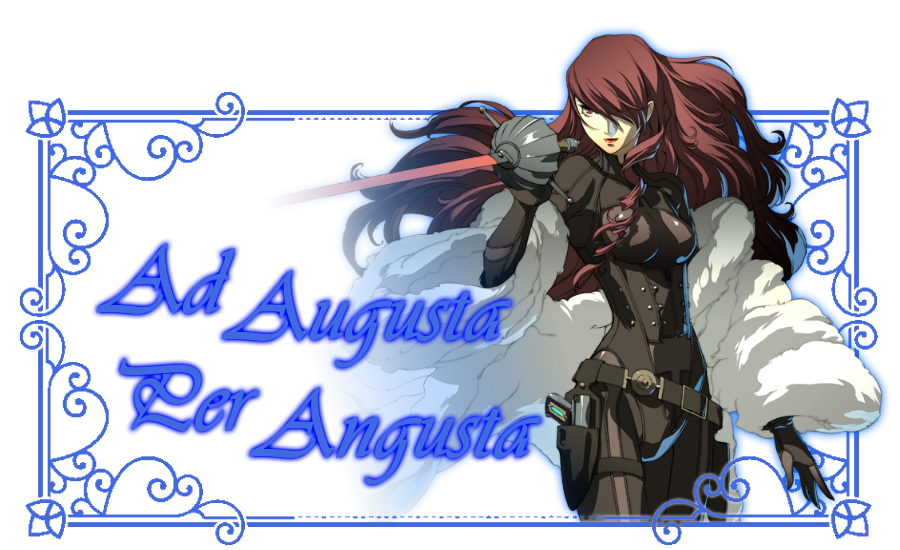 Akily was walking down the grassy road, looking to get back to Basilisk Fang. She had just finished an assassination, where she spilt the blood across the open field of a farmer's farm. She had done a job like it before, but this one felt different. Something about it odded her out. The man didn't seem to scream when she killed him. For some reason, all he did was look at her. His face was blank, as though he had accepted his own death. Usually, the people wouldn't do anything, but that was only due to shock. This person though, his face was blank. There was no fear in his eye, no shock that she was a 9 year old killing someone, just nothing. Akily couldn't remember what he looked like, except for his face. The blank eyes were the one thing that she could remember. Akily just shook it away, trying to erase it from her memories. With that, she felt a sudden tingle come from her katana. With one quick movement, she pulled it from the bag that held it, as it glimmered in the sun. All of a sudden, Akily felt her whole body go weightless as she felt something pull her by her feet. With the impact of her hitting the ground, she was knocked out. However, she could still feel the grassy surface beneath her as she was being pulled.

After ages of only seeing darkness, Akily opened up her eyes. She couldn't believe what she was seeing. She saw two demons stand in front of her. One of them seemed to be a pleasant looking girl, that had blue hair. She gently smiled at Akily, while the other demon, the one who had red hair, tapped on the ground impatiently. She seemed to be waiting for something. Akily wondered why she was brought there, and why there was another man around her as well. He didn't seem to be a demon, which was odd. Akily wondered why both of them would be sent there. Were the demons going to kill them or what? She found it weird that they needed to stop a war in order to just kill a few mages. Either way, Akily was ready to assassinate them if need be. With her newly found magic, Akily could easily kill them off. The question was if she should. In order for her to know, she would have to listen to what they had to say, because both seemed ready to burst out a few words.

Godfrey beheld the appearance of a young girl from the subterranean pit. Two demons in the shapes of girls stood before them. One of them had pink hair and the other blue. Both started talking at the same time and both stopped abruptly. They kibbled between themselves and then the blue one addressed them as the other was silent with a sour look. “I’m Misaki, we have summoned you two to pick a side. We need to decide the heir to the throne through a battle and one of us should have a champion or two to tip the scales.” The pink haired girl followed up “I am Masaki and I’m the rightful heir! I’m the only one suitable to change this place and make it bloom. The demons are stuck in their stupid habits of destruction. They ought to change and I can help them, they should show passion and compassion. Then the Nations of Earthland will want to trade with us out of friendship! Choose my side and you will be richly awarded.” The blue haired shook her and raised her fist, “Don’t listen to her nonsense!  I’m fit for the throne! Yes, these here should indeed be changed, they should use their destructive powers to bring fear. Only then will the Nations of Earthland trade with us, out of fear. And of course, I will give rewards as well.” Both of the girls looked at them, longing to hear of whom they would receive support.

Godfrey wasn’t sure what to feel. He was angry because they brought him here without notice and it was comical as well. The strife for a crown for which both think they are most suited while their reasoning is inadequate. Neither of them is a good choice to be the ruler but, he could get some fun out of it. It wouldn’t matter who he would bring upon the throne, in the end. When his master would signal the doom, the apocalypse, then either would be nocked from their throne with ease. His eyes glanced at the girl beside him, what would she think?

Akily looked over to the white haired man bestowed upon her. She had never seen him before, at least not that she thought of. She didn't know why, but she felt something off about him, like he was wreaking something unworldly. Something wasn't right about him, Akily felt death in the presence of him near her. She didn't feel like it was right to work with him, not at all. The Universe Spirit had told her about corruptions like these. People who spread the lands with plagues, it wasn't good for him to be on the Universe Spirit's world, especially not near Akily. For now though, Akily couldn't dwell on it. All she could do was just let him be until she got out of this Devil's land. So, she just listened to the two bickering girls, seeing which side had the least boring argument. After all, Akily was just there to deal with a dispute, and then leave. She didn't care who had it right, or who had it wrong. In the end, they were just bickering adults, either one she got to kill. In all honesty, it came down to Akily's need for the Universe Spirit's world to be safe. She couldn't let demons, let alone adults run it. So, she looked over to the blue demon girl and said to her, "Fine, but only on one condition will I help you. You better promise me that I will get connections towards those despicable adults. I have plans in the future that may have something useful for it." She didn't even care for the older man behind her. Adults didn't have the right to make decisions in the first place. So, as she waited for the blue demon's response, she cheered aloud and said, "Yay! Take that sissy, I knew democracy would win the heart of humans!"

With a grunt, the sister of the chosen demon pointed to the other side of the field, prepping for the battle to come. So, with a loud yell across the other side of the field, she said to everyone, "In twenty minutes the battle will recommence. Everyone be ready to perish, for we got a war on our hands." With that, Akily got out her Katana, and began prepping for war. She had never truly done something like this, so it excited her. Although she found wars idiotic and stupid, she found it to be quite exhilarating. Being able to kill those that did wrong without any consequences, felt amazing to her. There wasn't any right or wrong in war, or so she thought.

Godfrey was at a lose with the young girl that seemed to look down upon adults and her fierce response and demands towards blue demon named Misaki. He shook his head and laid a hand upon the shoulder of the girl. “I’ll follow her decision.” He spoke in his hoarse voice, he removed his hand a mark was left behind of the Ouroboros. The Ouroboros would protect the little girl from his pestilence magic. They walked together with the blue-haired demon to her army. “What is your name? Why did they bring you here?” Asked Godfrey to the girl, he didn’t explicitly say anything about her age. “I’m lord Godfrey of house Ushill, count of Ushill and Crachton.”

They had reached the line front line of the demons, that piece by piece looked less easy to look at then the commanders of both armies. Some wore rags and their weapons were made of old and chipped steel. The better-armed foot soldiers were dressed in chainmail and carried two swords, the latter a reminder of his youth. It seemed like it was another life that he had tried to fight with two wooden practice swords, foolish it was. Nowadays he barely fought with his sword anyway, his axe was his main weapon and if the enemies force also used two swords at once he could cleave straight through there swords and mail. The most prestigious demons stood upon chariots, they wore heavy armour and their horses were a flame in shades of sabre and azure.

A horn was heard, and others followed. The earth reverberated by the sound of them. The sound faded, and the earth stilled. Both sides marched towards each other and once more the ground shook but now by the feet of ten thousand men walking at once.