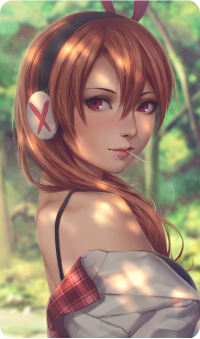 It was unusual to find Hime in a small village such as this one. She primarily enjoyed getting lost in crowds when it came to daily routine; the mage wanted to be part of the herd, flock, school of fish... she felt obliged to go with the flow. In order to adhere to society's standards of 'normal,' the girl required a pack of ordinary people and nameless sheep to get lost in. That was why large cities helped put Hime at ease, the promise of anonymity more easily fulfilled.

Yet, occasionally it was required to venture out to that dreaded countryside or into a more sparsely populated area. The more natural barriers there were to fill a place, generally the higher the slayer's level of comfort with the space even without other humans around. Here in the River Village, though, she found that there was hardly even the reassurance of environmental nooks and crannies to flee into, should the need arise. Instead, there was a decent sized river with very clear, fast moving waters. The banks surrounding it were grassy up until they turned into rocks, but either way the space was flat and open. Perfect for fishing; that thought brought up another one of Hime's objections to this village. The area smelled intensely of seafood, especially salmon and shell dwellers.

That alone irritated the slayer to no end. She sucked angrily on a fruity lollipop to try to wash away the scent of dead marine life as she stepped quickly along the bank and towards the village itself. At least the girl didn't expect to linger in this area for very long; she was simply here to protect a Rune Knight Major, accompanied by some strangers who she would hopefully meet soon. It was a simple mission with lots of back up.

Only, Hime wasn't really feeling the whole... protective thing. Vassa was still pissed off at her Hargeon Town stunt, and the slayer didn't really have funds and the willpower to get on a train. The cost was, after all, always doubly intense: motion sickness and incapacitation as well as that ordinary fine that was so reasonable for a steady worker but difficult to handle for someone like her. So Hime had walked the entire way to River Village, and she figured that her time spent here should function akin to a second vacation. It was supposed to be pleasant and full of beautiful vistas, anyway. Instead, she found a smelly, unkempt path that was extremely unclear to trod along. The peach haired mage's enthusiasm was below zero and well on its way to being permanently negative for the next few days. Also not aiding her in letting go of frustrations was the simple matter of her clothing. The slayer had her favorite outfit on, but it was dirtied now and possibly permanently ruined or stained by mud, sweat, and other gross things.

The mage hardly protested to a few friendly and smooth snakes around her, but the combination of bugs, smelly mud, and scattered dirt did not make her a happy camper. Especially when she had no desire to be a camper in the first place. In this way really no person could have been surprised to learn that shortly before making it to the village, Hime resolved internally, I will never agree to come to this place again. In fact, I'll build a coffin myself and push it into the river before I willingly venture to River Village after this mission. Her speech was deliberately formal, meant to imitate a solemn vow even in her own mind. It could even be called melodramatic, but Hime had always been one to embrace that word and similar adjectives.

A coffin was a bit like a door, after all. It was a wooden barrier between one world and the other, sort of life and death but mostly love and remorse or regret. It was between respect and derision; to bury someone or to throw their body to the vultures. Sometimes a coffin could demonstrate character, and sometimes it only meant that they had free time or too much money on their hands.

...Enough about coffins. Hime was very near to the River Village now, and she could no longer smell the river and fish as strongly, instead there was the smell of people who lived in the country and did not have things like faux perfume and lacrima air conditioning and fairy lights. All of those things were ones that she missed dearly, and it would be right to call her materialistic in that moment or maybe just as a general adjective, but those thins were nice. They improved her quality of life. They made her happier. The slayer sighed and brushed dried mud off of her skirt as she stepped into the village.

Immediately, she noted that there were hoof prints pressed into the dirt path under her feet. They had not been present on the journey here, the path she followed had been clean. If there was another route to this place that was better than the one she had traveled, Hime would be vexed. A shout came from her right and interrupted any thoughts. It was a boy a little older than her. He immediately began babbling something to her in a language that Hime wasn't familiar with. She could only hope this village did not have its own dialect and that he wasn't trying to inform her of the situation here. Unfortunately, with the way he was gesturing frantically and pointing at the very visible guild mark on her exposed shoulder from when Hime had pulled at her shirt due to the annoying heat it was highly possible that he recognized her as a mage assigned to the job of protection.

The slayer smiled unsympathetically and with saccharine sweetness to her expression. "Look, I'm not actually here for anything important, so you must have the wrong person," the peachy-auburn haired girl lied easily. She hitched up the edge of her collar to conceal anything the boy might have seen. "I'm just here to investigate surprisingly strong fishy smells that people in the nearest city have been able to smell." Hime could maybe try to help out a few panicked citizens from the Dark Mages' attacks, if that was all that was necessary. She thought it was the right thing to do, to not get the boy worked up about her being a possible savior or fixer-upper of everything. After all, Hime actually did consider the scent problem a bigger issue at the moment, so she would have to see about neutralizing that first and then perhaps attend to any civilians. If she had time.

It was at that moment that a villager wobbled into the village, an enormous basket of fish balanced in his hands. The woven container so obscured his vision that he was taking tentative steps, always tapping his foot around in front of him to be certain the placement was solid. Unfortunately, since Hime had just entered the River Village and had been confronted almost immediately at the entrance, she was directly in his path. She was also facing away, and being occupied with her thoughts on what to do about the fishy smell, all she could think of was It seems to even be growing stronger with every second I spend in this place. And here I thought it was lessening away from the river- then the man bumped into her, spilling fish all over the mage.

Immediately, Hime spat out her lollipop and whirled around, eyes burning as her flames snarled as they wrapped around her hands, balled into fists at her sides. "Pleasant way to greet a visitor," lightly, she spoke and smiled at the man, who had fallen to the ground. She held out a fiery hand, palm facing to the left so it looked as though she were offering him a helpful handshake minus the fire. "Here, I'll help you up." The villager squinted at the glow flickering around her fingers before tentatively reaching towards her, and then everything began happening at once.

Quick as a flash, the smile dropped from Hime's face and she hissed before a snake shot out from among the flames of her palms, curling around the fallen villager and searing his skin. The slayer erupted the area surrounding her with a bonfire, the blaze swiftly darkening the scales of the fish and then peeling them away to be blackened and burned. She winced as the stench of burning marine life permeated the air, but soon enough it was replaced by the familiar smell of anything when it burned and eventually became ash. With a much more relaxed smile, Hime flipped her hair over one shoulder and sheathed herself in a thin layer of flames to burn away any lingering fishy scent. Proceeding to stride further into the village, not bothering to manipulate the appearance of her flames to become invisible or less noticeable, the fiery mage charred the dirty path in her wake as she stalked to the middle of the village.

"If anyone has heard anything about dark wizards remaining in this village," she purred, not bothering to raise her voice much since it was dead silent except for the crackle of some smoldering coals. "Just say the word and I'll...smoke them out." There was only dead silence as she smirked. It seemed there was no major still present, and no dark mages left to hang around, and there didn't seem to be a fishy smell. Still, Hime thought she ought to make sure. Just in case.

A beatific smile curved her lips before she opened her mouth and let a stream of conflagration envelop the nearest house in a deafening roar. This village would burn, and anyone who could possibly be the mentioned dark guilded wizard would be taken care of. That was the mission, right? And if it wasn't, she could stand to have a little...fun on the way. Especially if that fun involved sending things up in smoke and maybe, accidentally for sure searing her favorite word into the side of the village leader's residence. Muscle memory, what can a girl do.

Job Title: Visit The Village
Rank: C-Rank
Job Location: River Village
Solo Word Count: 1500 Words
Group Word Count: 1500 per additional person beyond 1
Additional Requirements: C-Rank only, up to 6 mages max.
Job Description: Your character and and maybe some friends have heard that a group of dark mages plan to kill the major visiting the village. You have been given the mission to travel there and see if you can do anything about it. If you arrive too late to protect him, just try to calm down civilians, clear out wizards, or do whatever you think is fitting.
Enemies: Can be detailed more in the mission according to player wishes!
Reward: 10K Jewels and the notice of the Rune Knights