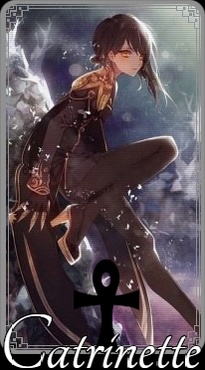 Kiyoko was walking down the docks in Hargeon when she spotted the line. That was... Madness. Pure chaos. She likes chaos, sure, but she usually preferred to be the one that was causing it. Still, she couldn't help but wonder what exactly was going on. Mind you, the only part she really cared about was if it could be useful to her. Oh, and if not, maybe she could create a little of her own and add to it. She'd had a boring day so far, and that would at least be slightly interesting, she supposed.

She drifted closer to the crowd, drawing some... Interested looks. She was used to that by now. She rather tended to stick out a bit. There was some undefinable characteristic to her that made her seem a bit, well of. Presumably it was courtesy of her demonic heritage. Still, just because she was used to it didn't mean she had to [/i]like[/i] it. She gave them dirty looks in return. She was rather good at that, and they wisely decided to stick to their own business.

She did, however, manage to overhear some snippets of conversation, and that definitely got her attention. Passports? The officials here were issuing passports! Now that was definitely something worth getting. With a passport she could go cause chaos in other countries, and spread her guild's infamy. It was perfect. Oh, she could inevitably sneak across the border, but that was risky, and would lead to unnecessary fights. A passports would make things much easier.

And with that, her mind was made up. She was going to her herself a passport. But there was no way she was going to stand in that line. Yeah right! No self-respecting dark mage was ever going to go stand around in line. She snorted. Then began casually strolling past the line.

The speaker was an indignant man, well overweight and wearing a nice suit, but not quite to the level of fancy. A wannabe rich guy, huh? He thought he was so good, that he could just stand up to her like that. Well, he had another thing coming. She whipped around to face him, her crimson eyes suddenly mere inches from his. Then he'd feel her fingernails digging into his arm.

Something about her quiet, menacing tone got through to him, and he blanched suddenly, leaning away from her. She released him, giving him a contemptuous look. He wasn't going to give her anymore trouble. A good number of the people around them had witnessed the confrontation too. All the better.

No one else decided to be stupid enough to try and stop her, so she reached the front of the line in no time, elbowing her way past a family of five chattering at an obnoxious volume about their vacation plans, and crossed over to the officer issuing the passports. He barely even looked up at her.

"Name, and reason for getting a passport."

"Kiyoko Asahid-Katsuya, and I'm a mage."

The official looked up at that, raising an eyebrow. "Oh? And what guild might you be from?"

Well, she couldn't exactly tell them the truth, so she just flat-out lied. "Black Rose."

It made no difference to her what guild she picked, so she just tossed out the first name that came to mind. And if she happened to at some point darken the guild's reputation, well, all the better.

Then the officer threw her a curve ball.

"Can I see your guildmark?"

Oh... Now that was an unforeseen circumstance, and could be problematic. Then she remembered. For some reason, she'd randomly decided to wear one of her hoodies today, even though the zipper was broken, and she'd pulled it all the way up. What a coincidence. Or was it? Either way, she took advantage, and began tugging vainly at the zipper, which refused to budge. If she really tried, of course, she knew how to get it open, but she didn't want to get it open.

"I'm sorry, the zipper seems to be stuck."

She smiled apologetically at the man, and he took stock of the line behind her before making a quick decision.

He moved on to asking about her other personal information, and she was glad to give it. Not a few minutes later, she was the owner of a brand new passport. Time to go find herself some trouble.