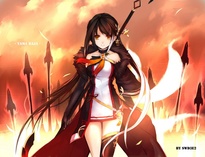 She sighs softly and gazes forward at the building while she is still within the town before Oras and herself manage to find a new job to take on. Having just been spending there time within this place do to the fact his guild is stationed here and thus having herself around to help her partner really and nothing much else. She gazes towards the docks where supposedly people are getting passports to be able to visit various countries which she had been told allows someone to go to different countries. Apparently some country feuds or some other weird thing preventing others from viewing the entirety of the world which leaves herself rather perplexed about how such things even come about. The society of civilizations and there rules seeming far from anything of a animal like thinking, but at the same time holding onto some qualities of such a thing making everything have that similar air of understanding but leaving her confused all the while. With a soft sigh as she shakes her head to clear the thoughts she makes her way towards the docks seeing already a rather large crowd of people trying to get there very own passports mostly seeming to be parents holding children's hands. She shakes her head and sighs softly as she doesn't really have much time to allow herself to wait around for people to get there passports before her as she needs time to train to try and surpass Oras. Holding the information within her hand for what is required to get a passport she nods her head knowing what has to be done to try and get her passport from these people as efficiently as possible.

As she arrives towards the docks she quickly activates her chameleon takeover ability as scales cover her from head to toe as she then activates there effect. As quick as a snap of a finger her entire body including her clothes and the information for the passport turn into nothing but a shimmer from the light reflecting off of Amora. With a unseen smile Amora makes her way through the ground moving people out of the way and causing more then just a few fights here and there by bumping people out of the way without any hesitance. She makes her way towards the front of the lines about second from the front in terms of the actual line, but about fifth in terms of how many people are surrounding her while hidden from view she quickly deactivates her takeover turning back to normal and suddenly appearing within the line with no one being none the wiser. The children fooling around doing other things and the parents being rather distracted trying to control the loud and obnoxious children around her. While waiting patiently for her turn a couple families go on ahead and get there passports verified when it is finally her turn she steps forward and makes her way across the bit of land and looks towards the lady in front of her. Amora hands the woman her passport information and without much time she gets it handed back with a seal of approval. With a rather satisfied grin Amora leaves the docks while putting her now approved passport in her coat for safety as she heads on back towards where her and Oras are training. 'That was quick and easy. I wonder what i should be working on next. Should i work on my full takeovers to try and think of better strategized moves, or should i work on trying to combine two takeover attacks into a single thing for better use?' She wonders to herself within her thoughts while autopilot walking her way home while avoiding bumping into anybody on the way back.

» New City, New Possibilities (Open)
» A Realm of Possibilities (Exam)
» Out of two worlds and into one.
» Two Worlds, One Family
» A Foot In Both Worlds...