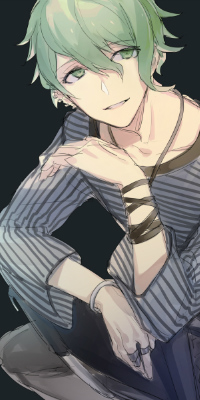 Today was very much an average day.

Ezio had got up in the morning, did his routine, and stopped by his favorite cafe. So far, everything seemed to be as it would normally go. And nothing was changing much now either, as he stood by the entrance to the boardwalk to wait for his friend, Valeria. The two had been fairly close since they were children, and frequently spent time with one another. So, it wasn't odd for him to invite her to the boardwalk. His outfit was fairly simple - he wore shorts, a t-shirt, as well as a nice white hat. This was pretty standard summer wear for guys, and it was best that he wore this today considering how hot it was out currently. Luckily, he was in the shade right now, under a large tree, so he wouldn't have to face the cruel rays of the scorching sun that honestly seemed like it was having quite a temper today. The plan was that the two friends would have a look around the boardwalk, perhaps get something to eat, or maybe play one of the many games that were set up along it. Though, these were all very simple carnival games that existed solely to take money from you, but still, it was something you did for the experience, not the prize.

Ezio was admittedly getting a little bit impatient, as she was supposed to be here a little while ago. Perhaps his watch was wrong? He pondered on the thought as he waited for his friend under the large oak tree.
Fair

It was a sunny day—a little too sunny, actually. Valeria had agreed to meet Ezio that day, the only friend she ever made properly before joining the Crystal Swan guild. Ezio was the only male in the world that her father allowed her to be friends with. That wasn’t the correct way to put it. It wasn’t as though her father approved of their friendship. It was more like...he didn’t pay much attention to it. Valeria’s father treated any and all males who approached his daughter like they weren’t good enough for her, even if their intentions were never to be more than friends. Ezio, on the other hand, never appeared as if he was interested in Valeria, which was some miracle-tier shit considering Val’s dad’s view on guys her age.

Valeria actually woke up early that day. The reason she was late to meet Ezio was simply because she lost track of time tidying up her gigantic bookshelf. Valeria had a huge collection of books since she was very fond of collecting things, which was why her room on the ship was perfect for her. Lightly powdering her face to create a matte look, Val headed to where Ezio would be waiting. She had already expected him to be angry at her for being late, though that wasn’t very much like him—to be mad, that is.

"Ah, there you are. Think nothing of it, I'm sure you had your reasons." Ezio stopped leaning against the tree trunk and stood up straight to face her. "You look nice today, too bad that'll most likely be ruined in half an hour with this intense heat..." he commented. "How are things going for you today, Val?"

Val was of course Ezio's nickname for the girl. After all, they had known each other for so long that it was only natural he would shorten her name a bit as a sign of endearment. Ezio had always been fairly passive when it came to girls (with some rare exceptions), so somehow he managed to get past the menacing figure that was her father. While it's true he wasn't interested in being friends with Val for the purpose of romance or sex, he had to admit, he was scared for the many boys who may have tried to take their shot at the girl. Were they even still alive...?

Ezio looked to the boardwalk, then back at Val. "We should get going soon though, we're lucky enough that it isn't busy today, hopefully it stays that way." It was very true that the boardwalk was not too busy as far as customers went, most likely due to the sheer heat. True, some people liked the heat, but many would much prefer to spend it in their cold homes, which was a sentiment Ezio could understand very well. After all, he was sure he would be dying to cool off after an hour or two in this heat.
Fair

Valeria was glad to hear that Ezio wasn’t upset about her late arrival, not that he was the type to get angry over such trivial matters in the first place. She chuckled when he mentioned that she looked nice today, saying, “Oh, don’t I look nice everyday? Don’t worry about it, I can handle it.” The last bit was referring to the heat. Val’s outfit was perfect for the hot weather. It was a bit exposing, and the material was light so it almost felt like she was wearing nothing. The only thing that could ruin her ‘beauty’ was if her face got too oily, which it normally did especially if it was hot outside.

“Well, I was late because I was rearranging the books on my new bookshelf. You know how I hate it when things are even slightly out of order,” she told Ezio, looking past him in the direction of the boardwalk. Standing there next to her friend, Valeria tossed some loose locks of her hair back so that her collar bones were visible. “Don’t tell me you’re thinking of going there?!” she said. It was too hot to be walking around in the sun especially with other people around.

Ezio supposed he could understand the need of organizing a bookshelf. He wasn't a clean freak or anything, but he could understand the importance of wanting to keep things neat and tidy. It seemed however, that the idea of the boardwalk did not seem like one that was appealing to Val. Putting his hand on his chin, Ezio thought to himself as quick as he could. What could they end up doing around town?

Meanwhile, he had to think of a way to distract the woman in front of him while he thought of something. "Ah, well, no. I was just kidding, you see. What we're really doing today is..." he said, as if he was doing a dramatic pause to build tension. Alright, this would give him a little bit of time to think. What was there in Hargeon? The boardwalk, which was out of the question. They couldn't go to the beach, since they had no swimwear. It would have to be somewhere that was situated indoors...there was somewhere they could eat, since there we many options for dining around the town. That being said, when he thought about it, the best place for them to go was most likely shopping. Every girl liked to shop, right? Just down the road was a big indoor shopping center too. "I figured we could take a look around the new shopping center down the street. They recently renovated it, you see and I was wondering what it would look like. You wouldn't mind going shopping either, right?"
Fair

Even though Valeria had made it clear that she was not at all interested in whatever was going on at the boardwalk, she didn’t have any other ideas to offer. She felt kind of silly after thinking about that. Should’ve thought of a better idea first, she thought to herself. But with Ezio around, she knew that she could count on him to come up with something more fun to do. She usually relied him to do the thinking. He was a very nice friend and she never got tired of his company. It was as if they were siblings separated at birth. At least for Valeria, that’s what it felt like.

It took a minute for Ezio to figure out what they were going to do now that she didn’t want to go to the boardwalk, and of course knowing Valeria he suggested an activity that he probably believed would interest Valeria greatly, and it did! Shopping was one of Val’s favorite things to do. It was worse when she was spending his father’s money. Now that she was earning her own money, she spent less, but still liked to shop once in a while.

» Just an average stroll in the woods... or was it? [Social, PVP, Private]
» I'm going to be above average!
» Something New (Private, JT)
» Not Your Average Photoshoot
» From (C)hallenging to (B)elow Average