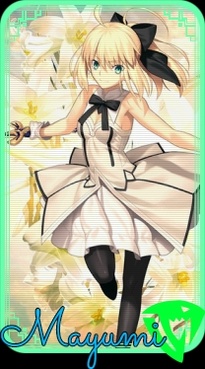 Mayumi eyed the portal before her warily. She'd heard of the Wakusei portals, of course. But she'd never used one before, and she wasn't excited to try. Sure, some of the locations were said to be beautiful, peaceful even, but she'd heard of them causing all sorts of problems before. Still, she had to take jobs where she could get them, so when a job made her use one of the portals, well... She had rent to pay. At least the job seemed simply enough. Go in, find the flower, and report on its status. In, out, and get a decent paycheck in the process. She hesitated for just on more moment, and then stepped through the odd portal and into a whole new world.

Mayumi could hardly believe her eyes as she ogled this strange place she had entered. She'd appeared deep within some sort of jungle, or rain forest perhaps. The trees were so tall she could barely make out their tops high above her. The ground was covered in such a deep carpet of leaves that she couldn't make out the soil. There were odd vines of every size and color creeping up trees, or wrapped around the dense bramble bushes scattered between the trees. And there were all manner of odd flowers too. Mostly growing off of the vines as they wound their way up the trunks of trees, using their neighbors to get closer to the sunlight with support they hadn't earned. Reds, blues, rich violets and dazzling yellows. Every hue one could imagine was represented among the beautiful blooms in the forest around her.

The beautiful colors entranced her for a long moment, until she realized she had just been standing staring at the scene for way too long. She needed to get a move on and get her job done. She knew the man had said the flower had been seen north of the portal. She could see just enough of the sun to be able to orient herself, and she headed north, looking for any flowers that looked... Out of the ordinary. The man hadn't told her what the flower looked like, he'd just said she'd know it when she saw it. That seemed hard to believe, with how amazing everything she'd seen so far was, but she had nothing else to go on, so she just had to keep an eye out for it.

Mayumi could swear she kept seeing movement out of the corner of her eye. At first, she'd thought it was just some kind of animal. Maybe running from her, or perhaps even stalking her. But it kept happening. And yet time and time again, she'd whip around and there would be nothing there. Nothing but a few bramble bushes and one of those weird flowers. They were almost like a red rose, but much bigger, and with a mass of vines twining around its base. They seemed to be very common in this world, because she kept seeing them all the time. Always right behind her, even when she didn't remember passing one. It was odd, to say the least, and it was starting to give her the creeps. She knew there was something hanging around here watching her, she just didn't know what it was. She paused, leaning over to inspect an interesting blue flower while keeping an eye out and... There it was! The movement again, and she whipped around as quickly as she could.

And then gaped open-mouthed, unable to believe what she was seeing. It was one of those red flowers- but it was moving! It was supported on those weird vines, almost like tentacles as it made its way forward. It froze in place, but just to late to avoid being spotted. Mayumi gasped in shock, and this thing, whatever the hell it was, seemed to realize that the jig was up. It attacked her, vines lashing at her, trying to grab her. One succeeded in wrapping around her arm, dragging her forward, and she realized the petals actually opened to form a gaping maw, complete with spines, just like on a venus flytrap. She shrieked, kicking at the flower. One kick knocked it backwards, but as she aimed another blow one of the vines wrapped around her leg, entangling her and dragging her to the ground. She stared in horror as the beast reared up again, looming over her, some type of sticky substance dripping from its jaws, a splattering of drops falling on her face and arms.

Right. She'd had about enough of this. She squirmed, finally managing to jerk one arm free, and she punched the things knocking it backward. She managed to free her other limbs, and did not waste any time following up on it. She launched a flurry of punches and kicks, continuing long after it had ceased moving. Probably a waste of energy, to be sure, but it was oddly therapeutic. She never wanted to see anything like that again. She leaned against a tree for a moment, panting from the brief exertion. Then she straightened again, reorienting herself. She needed to find this flower and get out of here, before she ran into more crazy things like this.

The next ten minutes or so of Mayumi's hike were rather uneventful. She no longer caught flashes of movement, nor did she see any more of those red flowers. That fact gave her a sinking suspicion that it had just been one flower all along, and that it had been following her the whole time. She wasn't sure if that was reassuring or not, but at least things had gone back to a rather relaxing hike. At least until she saw more movement. For a moment she was worried it would be another of those horrendous flowers. Instead what emerged was, well, cute. It was like a little fox with long, leaf-like ears and tail.

Probably silly, talking to an animal like that, but it was just too cute. In fact, it was walking toward her, sniffing at her experimentally. It was definitely a nice surprise, unlike that flower. She stared at it adoringly as it came closer, and closer, and...

All of a sudden, it's whip-like tail elongated, lashing at her. She let out a sharp cry of pain as it cut into her arm.

"What the hell?!? Does everything out here want to kill me?"

She smacked the creature away from her, instantly feeling horrible as the creature yelped in pain. But the pain in her arm stopped her from being too sympathetic. As it staggered back to its feet she aimed a kick toward its side, knocking it down again. This time when it managed to find its feet it wasted no time in scampering off into the undergrowth. Apparently it had decided that she wasn't someone it wanted to tangle with. Thank goodness. She was glad she didn't have to hurt the little creature anymore. She just hoped that letting it go wouldn't cause her problems farther down the road. She was starting to feel that she was going to face more trouble before she completed her task there.

Mayumi was starting to get tired of this place, and fast. It wasn't just the apparently hostile wildlife, but also just the climate itself. It was hot. Not the sort of scorching heat of desert environments, but the sort of soul-sucking heat that you didn't recognize as first, but it just kept building, and building, until she was covered head-to-toe in a sheen of sweat. It was also humid, muggy really, which just added to the mounting discomfort. And then there were the biting insects. They were everywhere. No matter how many she swatted on her arms and legs, more just kept coming. It was, well miserable really, and she just wanted to find this damn flower and be done with this.

And then, suddenly, she stumbled upon a clearing. And there, in the center, was the flower. Oh, the man had clearly been right when he said she'd know when she saw the flower. It was... Spectacular. The delicate lily-like petals looked like they were made of pure gold, and the stem and leaves were bathed in a silver glow. The center of the flower looked like some magnificent work of art, with copper veining running outward onto the petals before gradually fading away.

Oh, and did she mention that the clearing was practically overflowing with other blooms? The entire space was filled with flowers of all shapes, sizes, and colors. Oh the colors. It was impossible to imagine this wide array of hues unless you saw them for yourself.

But of course, there was just one catch. Isn't there always a catch? See, she wasn't in the clearing alone. It seemed she had been right when she'd thought she would encounter more problems before she was finished here...

It just had to be her rotten luck that another one of those little fox-like creatures was here. Why? They were still just too cute, and it pained her to have to fight one. She barely had the heart to do it, and she knew she'd never be able to do it any serious damage. She just had to hope it had the good sense to leave before she had to take drastic measures. She sighed. Well, there was no point in delaying the inevitable.

This time she knew better than to let the fox get too close to her without closely watching its movements. She took the initiative herself, heading straight toward it. Then there was a sudden movement from the field of flowers, and something shot toward her. It was some sort of... Flower wreath? And before she had time to react it had wrapped itself around her neck. She tried to gasp for air, but just couldn't. She grabbed at it, even as she felt the whip-like tail of the fox creature lashing at her legs. She finally managed to tear the wreath off of her neck, practically shredding it in the process. She threw it aside, then turned her attention back to her other attacker. A couple of well-placed kicks finally sent it running.

She paused for a long moment, breathing deeply. Her neck was still sore, and the lacerations on her legs stung horribly. She made a quick decision. She'd gotten the information she needed. Now it was time to hightail it out of here.