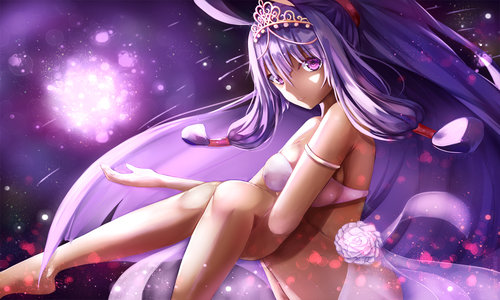 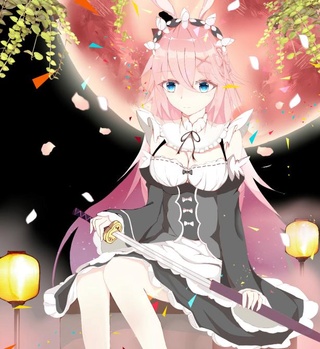 Cowering behind the wall, shaking like.. well a frightened bunny that she was pretty close to being if she was covered in any more fur than what was on her ears and tail. Gisen was trying to overcome her fears so she could learn to be a better person-- a normal person. She was tired of having this compulsion to jump and hide into the nearest cover to avoid even being within eyesight of another human being of any shape or form. So, to try and help herself overcome that, she had tried to pick up a menial job in a maid cafe to try and accomplish just that. And some might think "why would the guild master of a mage guild be in a maid cafe of all places?" Well... that would be her companion whom signed her up for the place in specific. A place that had many of its employees who were among the neko, kitsune, and dog ears adn tails walking around to serve customers. "I.. How d-did I l-let Raphy t-talk me i-into this place..." She muttered, peeking around the corner of the wall, seeing people eating, others coming and going, waiters and waitresses smiling and taking orders, cleaning up. She'd tried doing tables of people for a couple hours, coming up to only scribble down orders or asking others for a little help in trying to get things done. Of course, it was only her second day, so people did understand. But as happy as the others were, they let her take tables of one to two people so she could get used to the job, which was the smarter idea in everyones part. She only had done a couple, other times just serving drinks and helping carry larger tables platters with food as though she'd done before... Which wasn't a lie. She was used to cooking up and serving large platters of monster parts as courses of dinner. So placing herself into those states of mind helped put her at some ease.

Suddenly, she felt a poking on her shoulder and she squeaked, jumping and turning around in the same motion as a cat girl maid with short, shoulder length blonde hair had stood behind her with a blank notepad. This girl was her shadow, helping her to learn so she could go on her own. "Take this and you'll get that girl right over there, nya. I'll watch and be right here for if you need help, nya." She explained. The pink haired bunny girl nodded and cleared her throat, smiling a little. Turning back around, she headed out to a small table set for two where a lone brunette woman sat and approached her. Stopping in front of the table, Gisen had paused and took a breath of air in and out, taking the notepad and putting on a smile. "Good afternoon, m-master! W-Welcome to the maid cafe! My n-name is Gisen and I'll be your w-waitress today. M-May I start y-you start with a drink or something else?" She greeted, holding up her pad and pen without realizing she'd gone slightly off script, but extremely well comparatively to the day before.
Made by Riley at THQ!
_____________________________________________________________________________________