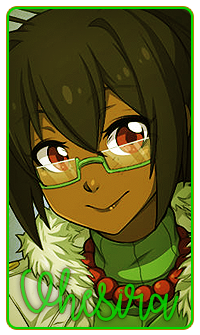 Vhesira wiped her brow, taking a deep breath as she looked around the grounds. The smiles on everyone's faces, the laughter of children, and the sense of pride and accomplishment that seemed to permeate the air. She laughed softly, feeling that pride and accomplishment as well. How could she not? She was a part of this now, even if it was a small part in her opinion. She'd helped this day go smoothly, and that was something to be proud of. The blood drawn today would help save lives. If she looked at it a certain way, she could pretend that she had saved lives by helping today. And that... that was something that made her smile grow even more.

The day had started out fairly simply. She'd been looking over the job postings, looking for the perfect 'first job' for her as a member of Crystal Swan. She had been a bit indecisive about it, but had eventually settled on this one. Serving food and drinks, entertaining children, and helping take care of people in general during the Rose Garden Blood Drive. It sounded perfect to her; she could help people, and didn't have to worry about combat just yet. So she'd eagerly taken on the job, and made her way here.

When she had arrived, the place was already bustling with activity. She'd quickly moved to get signed in and set up for her job, and gotten to work. They had started her out serving food and drinks, and she'd happily moved about the tents and tables set up, chatting with the people there and trying to put them all at ease. Her flirtatious nature had come out to play as well, and she had to admit that the blushes she elicited from some of them were truly spectacular. At one point, a man had collapsed after giving blood, and she had used her magic to catch his fall from several feet away. After that, she'd been given a new task.

As it turned out, manipulating the kinetic energy of a ball to make it move all over the place, seemingly on it's own, was an easy way to entertain a group of children. They were amazed by the ball zipping around and changing directions, bouncing around, and various other tricks. To be honest, she'd enjoyed it as well. Seeing the smiles and wonder on their faces had made her day, and she hoped to do more jobs like this some day. She really enjoyed making people smile, it made her feel like maybe she was on the right track; that maybe even someone like her could do some good in the world.

It was as she was reflecting on all of this that she felt a slight tug at her sleeve. She looked down, startled to see a little boy, no more than five, looking up at her with his thumb in his mouth. She knelt down, giving him a small smile. "Hey there little guy, did you need something?" The little boy was silent for a moment, before pulling his thumb from his mouth and responding.

"I can't find my Momma..." He sniffled a bit, and Vhesira bit her lip. That wasn't good.

"I see... well, what's your name?" She glanced around, wondering where his mother might be. Surely she was looking for him, but it was rather crowded around here right now.

"Tommy... can you help me?" He looked scared, and even if he hadn't, Vhesira of course would have wanted to help him. She just smiled, and gently picked him up, putting him up on her shoulders. He let out a gasp, surprised by the sudden new perspective he had, and then began to giggle as Vhesira began practically bounding through the crowd.

"Hey Tommy, keep an eye out for your mom! We'll find her real quick, alright?" She grinned as she heard him let out another peal of laughter. The feeling of warmth that helping others gave her, that sense of purpose and of having done something meaningful... she'd never get enough of it. And as she eventually set Tommy down in his mothers arms and watched them embrace each other, saw the smiles on their faces and as they thanked her... for the first time she was completely sure of her decision. Joining Crystal Swan and taking on jobs, especially this one... she'd remember her first job for the rest of her life, she was sure.