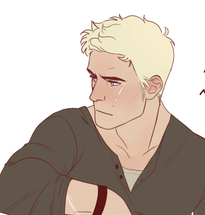 Halkoran honestly had not idea what the fuss was about. He had simply been strolling through the hargeon streets, taking in the sights and smells o the city, when he saw them. After turning a corner Halkoran came face to face with a crowd of people swarming what appeared to be some kind of ticket both on the side of a small building. Perhaps it was some kind of concert? Analyzing the scene, he decided it would be best if he knew what was going on. He wouldn't want to miss out on anything, the fear of missing out on something great present in his mind. The lines- ones that snaked around in every which direction, seemed far too long to wait in without knowing the cause. He couldn't just walk up to the people either, what if they said something mean to him? Undeniably, the costs were far too high for something that likely didn't even matter in the long-run. Today though, Halkoran wanted to be adventurous.

This adventurism resulted in him awkwardly sliding around through people all the while muttering out genuine apologies. He knew people probably didn't want to be bumping into him, the afternoon heat having caused sweat to drip down his shirt. Hell, the whole crowd smelled awful, he had to wonder how long they had all been waiting there. Try as he may, his large and bright smiles did nothing to calm the annoyed expressions forming on the faces of most of the people he bumped past. Though, he yelped somewhat in surprise when one of the townsfolk grabbed at his bicep.

"Hey, Skipper, I've been here for hours. No way you're getting past me."

A blank expression presented on Halkoran's face. It took a few moments for him to realize that this person was angry and had physically grabbed him. Blushing away, he didn't even yank away his arm, lest he enrage the old man even further. The crowd gave way, forming a large circle around them. Evidently, they could sense the conflict brewing and wanted to be completely out of the way should punches had been thrown.

"S-skipper? No, I w-wasn't, just trying to cross the yard, that's all. Sorry man, didn't mean to cause you trouble..."

Mortified, the blonde mage sighed with relief when the old hand ungripped his bicep. Did these people really think he was skipping ahead of them? It made Halkoran feel guilty, he'd never put other people beneath him by skipping them in line. He didn't' think himself as better than them, nor did he want them to think he thought that. With shame apparent on his face, Hal shuffled carefully through the crowd once more. Passing through a sea of sweaty bodies and outstretched limbs, he eventually made it to the main building. Sat above and before him, behind a thick pane of glass, a small woman glared down at him. She wore an outfit of some sorts, reminding him of the outfits worn by the car saleswomen at the nearby dealership. Blue fabric striped with red and white, pinned with a silver wheel adorned with wings. It was a nice outfit, at the very least, distracting from her judgmental and almost-empty gaze.

"Hello sir, would you like a passport?" If not for his holy protection, Halkoran was sure the woman's monotone would have sucked his life essence dry.

Passport? Halkoran's mind scanned for what exactly a passport was for again. From what he could remember, they were pieces of official identification that would allow him to travel earthland. He licked his lips, licking the sound of that. Thoughts of far-away beaches and tropical lush jungles filled his mind. Before he could think about the words coming from his mouth, he responded.

After about ten minutes of official legalese and document signing, the same bored woman handed him the small booklet. It looked nice, obviously of high quality. Looking up from the book, he gazed at the crowd, realizing they were all glaring at him with intense anger. Halkoran had accidentally skipped them all in line.