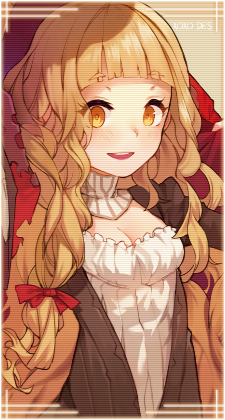 The surrounding area of Rose Garden would be shrouded in darkness as the street lights began to flicker with life. It was the beginning of the evening so it was the time of day where Rose Garden truly came alive. The streets were buzzing with life as countless people walked around exploring the true beauties the city had to offer in it's night time entertainment. Lilium would be walking around in her jacket, smiling softly as she took in the sights the city had to offer. There were plenty of gorgeous clubs and such, but the holy mage had never been that sort of person. She didn't enjoy partying out much as she was uncomfortable with how cramped that environment usually felt. Her straightened hair swayed in the wind behind her back as she brushed the stray strands that had partially obscured her face. She was making her way over to the spot that the camera crew had agreed on. Doing modelling again was an odd decision that she had come to in the week past. She had originally seen herself as not worth showing to the world but she has been slowly coming to terms that if her parents can start over despite the living proof of the first screw up, then she would be able to do the same. Modelling is something that she had only done as Hikari but she didn't think she'd enjoy it as much as she did. It originally started with a group that was focused on the environment for their photo shoot, but soon after, the holy mage had won a competition, claiming the title of Fiore's Next Top Model. She wasn't sure who was crowned after her but she had an amazing time dominating that competition. It was a world that she wanted to get back into, so when Sorcerer's Magazine offered her a spot to model, she was honoured and immediately took the request. Arthur was initially surprised about her taking the request but didn't question it further. A lot of people have hobbies that would surprise people to figure out. It was a good form of escape from the crazy world that being in a guild brings about. Gave her a chance to breath and recollect herself before throwing herself back out in the world of danger.

Arriving at the pre-determined location, Lilium would check her iLac to make sure that she had arrived at the correct time. After confirming with the crew that were on their way, she'd sit at the edge of nearby fountain. Quietly humming a song to herself, she'd look around and take in the stillness of the area around her. There was next to no one here. Perhaps it was too early into the night for people to be seeking fresh air from the indoors but it was still somewhat surprising to see an area of Rose Garden where there was absolutely no one. It wasn't as if they had closed off the area to take the photos either, there were no restrictions set up in the area and it was just a natural lack of people. Smiling to herself, Lilium would snap her fingers and essences of her magic would begin to float all over the area. She had an attack like this but she toned it down considerably so that the essence simply provided more lights. It felt like a scene out of a story book to be completely honest. She was just waiting for someone at this point. Lilium closed her eyes with her head looking towards the sky as she considered what could happen if this were a story book. She could be attacked and that'd be the tragic end of her story, but that seems to unexpected for this kind of night. It was one of those nights where you felt as there would be no sharp changes in fate as nothing really was happening. She could also have her parents talk to her and have a heart to heart with them but that was also really stretching it. Her parents already know where she is so they wouldn't need to come and visit her spontaneously. They could probably contact her through iLac if they tried hard enough. But, the only option left after that would be getting swept off of her feet but the holy mage shook her head as she felt her face heat up. She doesn't know anyone that she'd even consider thinking of like that and it'd be rather odd of a stranger to do that. The thoughts in her head would be snapped out of her mind, as she heard a voice calling to her. Ah, it was the director of the shoot. Sitting back down at the fountain, she'd simply smile and wave as they began to set up their equipment.

The photos that they had managed to take were really adorable in all honesty. There were a couple of serious shots, a handful of candid photos and even some action shots where they ha specifically asked Lilium to act as though she was fighting or about to use her magic. At first, it felt awkward but after a little while, she found herself getting back into it. Each pose that she struck felt more natural as she felt a little bit more confident in herself. Smiling as the camera crew began to pack up, they offered to go out to drinks but the holy mage had to politely decline. She mainly wanted to pick up a dessert on cafe and head on home but she was quite happy with how the photo shoot turned out in the end. It was rather interesting to model again though and she had to keep that in mind as she would have to make sure everything turned out okay but she was starting to be as confident as she was back when she was Hikari. It might take a long time to get back up to who she was when she was completely confident with who she was, even if it was a lie, but at least for the time being, she could work to make her way back up to that goal. Modelling was something that she didn't realize she had a knack for but now, she was willing to use it as an outlet for how she was feeling as opposed to bottling it up.