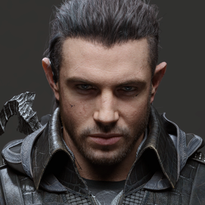 It was evening; the sun beginning to make its way to meet the western horizon. It had been a fairly fruitful day, having completed a couple jobs, and Darc now sat with a full wallet. Something that was always appreciated. They weren't difficult jobs, that was true and irritated him greatly, but it couldn't be helped. The only other jobs that had been available he knew damn well he wasn't strong enough for. Darc had only recently acquired his Demon Slaying magic and was still learning the ropes, and though this new magic was powerful and gave him many new abilities he was still very much so wet behind the ears. So though it bugged him immensely, he would have to take things slow.

Still, even though he considered these weaker jobs to have been beneath him, Darc couldn't deny that the amount of jewel they were offering wasn't compelling, and honestly far more than what those fools should have been rewarding for such easy jobs. But far be it from him to correct them.

So there he was after finding a decent bar in Cedar, the locals having spoken well of the place; lounging on one of the multiple bar stools set under the mahogany counter, and a glass of their finest honey whiskey in hand. 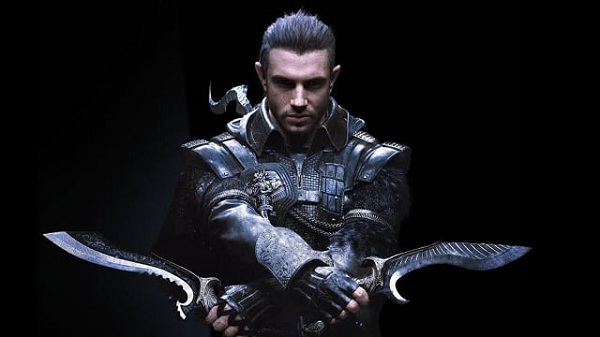 Try as he might though, Darc just couldn't shake his restlessness. It couldn't be helped. Darc was a man of action; he needed excitement, and a thrill of a good fight to get himself through the monotonous miasmic day-to-day activities. And when he couldn't find that excitement, or encounter a good scuffle, Darc was then forced to create the entertainment for himself. Something that never boded well with the simple passerby which lingered around him.

Like now for instance. These poor souls in this nice bar, enjoying their drinks in peace, not a care in the world; simple smiles on their faces, a chuckle between friends and comrades. Darc could appreciate the level of trust and friendship he could see developed in many of their faces, even if he didn't really agree with any of it himself. He wondered how many of them would react if he killed one or more of them right now. Would their supposed trusted friends and comrades come to their aid? Would they actually stand and fight? Or would they run like the pathetic cowards he expected they would be?

Darc had encountered situations like this many times before; forced to create entertainment for himself. He would sometimes make a bet with himself, or if he could encounter a kindred spirit would submit a wager with them; betting on what kind of spirit the fools around them possessed. It was through these simple forms of entertainment that Darc had come to realize two things: the first, most people he encountered were truly cowards at heart, and the second was that he was typically a good judge of character.

Thankfully for the poor souls sitting in the relatively quiet bar, Darc's sadistic nature would soon find an alternate form of entertainment, and a fairly satisfying one at that. Darc was just beginning to scan the number of inhabitants of the bar for a good subject for a game, when three perfect options walked in.

He could hear them coming before they even entered through the door, their boisterous natures made sure of that. As the trio walked through the front door to the bar, Darc glanced up at the reflective cabinet behind the bartender. He spotted three handsome twenty-somethings; their youthful vigor practically radiated, their smiles beaming as they talked about a job they had just finished. When their raving about their exciting job quickly segwayed into wide-eyed boasting over their guild, Darc could practically feel his stomach churn.

Legal mages could be so nauseating. And obnoxious. He lifted a small corner of his mouth in contempt as they continued speaking rather loudly. What he wouldn't give to shut them up, preferably permanently. He could fight them, after all there was only three of them, and each were so young he doubted they would have the kind of experience he did. And he was certainly aching for a good fight. He could see it vividly in his mind, the adrenaline rushing through his body as he gripped them tight and slammed them one by one into the ground, he could hear the satisfying snap of their limbs as he broke them one after the other, and could relish in their pain.

What a thrill it would be.

Darc had very nearly decided on thoroughly beating the trio into a pulp when another perfectly tantalizing option presented itself to him. Sure, beating the shit out of the young mages would be fun, and rewarding in its own right, sometimes the best method of shutting legal mages up was to ruin their reputation. And said opportunity practically came waltzing up to the counter for him; one of the trio approached the bartender, asking for three pitchers of beer for himself and his friends.

Darc arched a brow at this. He didn't really think completing one job meant the trio should get trashed, but whatever. Far be it from him to judge what others considered to be drunk-worthy achievements. However, this would work out better for him. It was far from secret that many a legal mage has been caught in questionable acts after getting a few drinks in them. All Darc had to do was wait for their first round of pitchers to be finished off, and then his opportunity would be primed.

Darc was on to his second glass of whiskey, barely feeling any buzz, but knowing he would be feeling plenty soon. He noticed that when the bartender went to fetch the pitchers for the small group, he had to walk out of site to grab the fresh pitchers, and to fill them with the particular beer the younglings were ordering, apparently not being one that was all that popular.

During this time, the register was left unattended, and well out of site of most except for those whom were at the bar.

With the first round of pitchers finished off, the three came bumbling up to the counter, ready for a second round, to which the bartender gave the group a deadpan stare before grabbing their pitchers to refill them. Darc then got up to leave the bar for a short time, he figured going to the restroom would be just long enough. He needed for the trio to be the ones most saw at the counter while the bartender was away. Gave Darc a better alibi.

When Darc had returned, the group was picking up their pitchers from the bartender, who seemed happy to have them away from his counter. Something told Darc the man didn't trust the young legal mages, which made this all the more perfect. All he needed to do now was to get the man to leave the counter one last time, so he politely asked the bartender if he could try a glass of what the younglings were having.

"Sure." The man replied, "But between you and me, it's not that good. Why do you think I have it stored in the back?"

As the man left to grab Darc a glass of the not so popular beer, he made a quick scan of the bar, ensuring that all eyes were on the boisterous and buzzed group of young mages. Knowing he was safe from view, he swiftly reached over the counter and pulled the register drawer all the way open. Darc had realized earlier that the man never completely closed the drawer. Not the most brilliant move on the bartenders' part, but he figured the most likely reason was that he didn't have the key needed to lock it. Probably lost it at some point. But that was perfect for Darc.

With the drawer open, Darc quickly swiped a good chunk of the bills before quickly and silently sliding the drawer back in place; then returning to his spot and pocketing the money. The whole process probably took five, maybe six seconds. When Darc returned to his seat, he quickly and nonchalantly checked to room, ensuring that no one had spotted him. Thankfully, he could see that most of the eyes in the room were continuing to send annoyed glances at the noisy bunch in the middle of the bar.

When the bartender returned with his drink, Darc gave it a try and quickly regretted it. He wasn't a fan of beer to begin with, and this version had to be one of the most tasteless and revolting versions he'd ever tried. He held a sincere grimace on his face as he looked at the glass in disgust, "Ugh. They actually like this crap? Sorry my good man. Guess I should have listened to you." Darc said to the bartender, to which the man chuckled. He placed the disgusting drink back on the counter then fetched a bill out of his wallet, placing it in the tip jar, having already paid for his drinks in advance.

"Well good sir. I think it's time for me to call it a night." He said, and then nodded to the bartender, who gave him an appreciative nod of his own before Darc turned to leave.

The next part of his plan was very simple. As he passed by the noisy kids, he simply and subtly planted to wad of cash in the pocket of one of the trio's jackets, making sure to make the transition of of site of those around them. It didn't take long, as he figured the bartender would soon check his register. Darc could hear the exclaims from the man after he had exited the building, and knew it wouldn't take much longer for the planted cash to be found.

As luck would have it, he was passing a couple officers of the law shortly after exiting the bar. And though Darc typically avoided these particular individuals as often as he could, now was different. "Gentlemen," Darc said with a simple wave to get their attention, "If I'm not mistaken, I believe I witnessed a small group of young mages stealing money from the register in this bar here." He said and motioned to the bar behind him, "You might want to hurry. I think the bartender is about to go nutso on them."

With his good, yet not so good deed done for the day Darc gave a little smirk as he glanced back at the bar. Placing his hands in his pockets he strolled down the road, a little smile on his face.