The seconds ticked down, Sorano carefully watching the screen with an intense gaze while she awaited the results. Feeling the tight, expectant waves of emotion radiating from around the hall, she too was feeling rather pent up. Finally, as the seconds entered the last set of ten, the numbers shuddered, then flickered to a steady line of zeroes. It was done. The First Annual Fairy Tail Kahoot Game… It was finally over. In a cascade of colors and lights, the music would slow to a stop as well, displaying the final three winners of the game. There they were – the most intellectually powerful members of Fairy Tail. Finally the champions had been revealed.

The guild master turned around to face the winners, gesturing for them to climb up onto the holographic platform as well. Elevated levels would rise up from the translucent surface for them to stand, and Sorano would retrieve rewards from a mirror she had attached to the side of the screen. “Congratulations: Althea Eventide, Leila Moon, and Hana Akki, you are the official Kahoot Champions of Fairy Tail until next year! Known honorable for your legendary endurance and truly astonishing intellectual superiority, you may receive your prizes!” First approaching Hana, the letter mage nodded at her longtime teammate and probably one of the closest people to her in the guild.

“Hana Akki! I award you with twenty-thousand jewels, a strong item, and your bronze medal for your outstanding accuracy in this event. I knew you could do it.” Softening slightly for the ice mage, Sorano let herself relax as she handed the pouch of jewels and wrapped item to her teammate. Memories flooded back of her earliest days with the whole FOP Crew, and she wondered where everyone else was for a moment. With a shake of Hana’s hand, the letter mage would move on to the next person.

“Leila Moon! I award you with thirty-thousand jewels, Mura Kensho’s prized Hitbreaker shield of legendary value, and your silver for the skill and speed with which you discovered your answers. Excellent job.” Although she barely knew the neko, Sorano had seen enough throughout the event to realize just how hard the woman was willing to work to accomplish a goal. Surely she would become a most valuable asset.

Finally, Sorano would move towards Althea, applauding lightly for the girl before opening her mouth to speak. However, before she could do so, a voice would suddenly find itself intruding into her mind, whispering the most perplexing things to her. “Heyo Sora, it’s me, Ivy.” Oh no. Oh no no no. Not this person again? A frown stretching across her face, Sorano was about to object to this outside presence before the voice continued on, quickly. “My time here is almost up. I’m not allowed to break the fourth wall for too long, so listen closely, okay? You’ve got to give Althea a lifetime supply of unlimited juice at the bar. Trust me. You’ve got to. Otherwise she’s gonna be sad, and Rain’s gonna have my hide. Alright, I’m off!”

The guild master blinked in confusion as this mysterious ‘Ivy’ abruptly left, leaving her with little choice to oblige. After all, Fairy Tail was a very old and extremely rich guild that had more than enough money to purchase lots of juice. Their service and attention to Magnolia also gave them a discount. That was pretty cool. But now, Sorano would finally turn towards Althea again, holding out the two pouches. “Althea Eventide! I award you with forty-thousand jewels, an extremely rare artifact of previous Kahoot champions, as well as your gold medal! In addition to these rewards, you will also receive a lifetime unlimited supply of drinks at our guild bar. Congratulations to our three Kahoot champions!”

A smattering of applause rose from the crowd, and the letter mage would gesture for them to leave the stage. Now to clean all of this up…

(Your jewels and items will be transferred soon.)

Badges:
You can use these for whatever - put in your sig, put in your bank, don't use them, idrc. 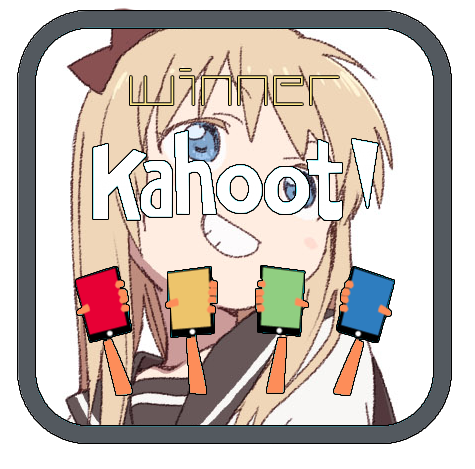 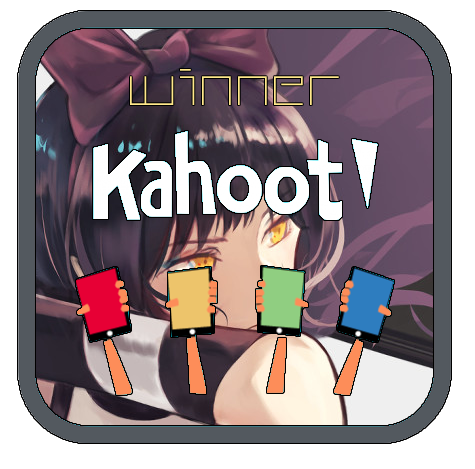