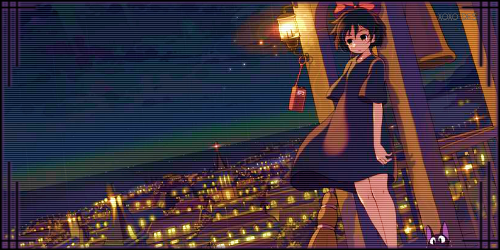 The scent of a fresh blunt of weed could be smelled from the skyline of the city of roses, followed by a continuous meowing sound; the pair of two sat among the roof of a giant skyscraper, facing the wooden docks and watching the crowds of people flock outwards after receiving their passports. It was why Rosemary was here in Rose Garden, after all; she wished to be able to get a new passport, as her older one was outdated and fell out her bag while she was on her way to make a drug deal above the sea. She had also collected a large order of cocaine to Ca-Elum to be delivered in the next few days; it was already illegal with what she was doing, so she did not wish to risk issues with border patrol officers in the process. Blowing the smoke out of her small mouth, the little girl would soon pass it to her exceed and watch her inhale and exhale, smiling as she pet her soft head and wafted away the thick smoke. "You... you know, maybe this won't be so scary! I, ah... I am scared, though..." the witch told Catnip as she looked down at the line of people winding across the horizon, following with a yawn being produced by both parties before picking up Fennel, her witch broomstick. "I just- I don't want to wait in line!" Rosemary cried, as the black cat rubbed her head against her thigh in order to console her. She suffered from social anxiety in some aspects, therefore it stood to reason why she did not wish to do so. "You can always cut the line, dearie. Just keep running, just keep running~" Catnip told her as she hopped upon the broomstick, following in Rosemary fastening her bag upon her back and dropping the remnants on the blunt upon the rooftop as she was finished.

Flying downwards by the line in a very quick motion, the witch soon hopped off and began to run through the crowd, pushing people in order to get to the front of the line. With a mixture of grunting, groaning, aegyo, and kyaas~ because of her actions of forcibly moving through the crowds, the cheeks upon the drug dealers' face turned a bright pink as she ran down the wooden planks that sat above the water due to embarrassment and shyness. "Please... please move! I'm sorry! Come- coming through, ma'am!" Rosemary exclaimed as she shifted through the crowds of mages, soon appearing in-front of the line at the reception desk. Panting ever so vibrantly and wiping a small bead of sweat off of her forehead, the young witch fastened the red ribbon among her head and removed a bottle of chilled tea from her bag and began to chug it, refreshing her body due to the amount of exercise she exerted. Standing on her tip-toes and looking up at the soldiers sitting and standing near the table, her cheeks twinkled a pink red as she shyly asked if she was capable of getting a passport, in which they agreed upon and allowed her to do so with questions being asked.

The dreaded question, as she could not answer truthfully. Pulling out a stolen guildless insignia, she displayed it with a hesitant pink on her face, her heart beating faster and faster as the officer looked at it with a raised eyebrow. "Guild- Guildless!"

"Very well. Height, weight, and all of that jazz?"

The young witch began to hesitantly share that kind of information, following in her slipping her newly received passport into her wallet and flying away on her broom with her exceed. Sipping her tea bottle and flying over the ocean, she began to fly home in order to work on more witchy things and the process of rolling blunts and preparing bags of other drugs.