Waking up that morning, Rin was quite groggy. The sun shone brightly through her window, causing her to squint as she opened her pinkish brown eyes. She grunted and turned over in her bed, not wanting to start her day just yet.
"Lilyyyy. Did you open the curtainsss?" Rin whined, glaring at her fluffy, furry friend. Lily smirked and approached her, booping her lightly on the nose "Yes my dear. It's morning time, and YOU need to get going. We have a job to do today." Lily replied, pulling the covers off of Rin's small body. A shiver shot up her spine. It had felt like all the warmth had been stripped from her body. "Ughhh..." she grumbled, standing up reluctantly from her bed. "I'll be back for you." she whimpered, blowing a kiss to her cushy bed. She proceeded with her morning routine, showering, brushing her teeth, and finally getting dressed for the day.

Once she had finished, she grabbed her bag which contained a few snacks, her tablet, and her trusty teddy bear. "Rin, why do you insist on bringing that old teddy bear with you wherever you go?" Lily asked, glaring at the bear. "It's my good luck charm! I don't go anywhere without it! You know this!" Rin explained, tossing her bag onto her shoulder. "Now let's go!" she continued, scooping Lily up and placing her gently on the opposite shoulder from her bag. They exited their home and made a beeline for the guild hall, the place that they had decided to meet their new friend, Angel. Rin didn't really know much about him, aside from the fact that his sense of style was amazing. Curious to learn more about her guildmate, she pressed onward, entering the guild hall and waiting for him to arrive.
coded by benetnasch of THQ 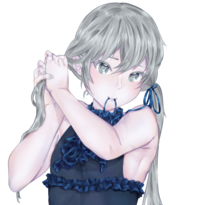 A dark room. A white room with the bare essentials and some mannequins. A bed, a window, and a dresser. On the bed, a questionably gendered person lay on their bed with their long grey hair laid out in all directions. Their mouth hang open and an audible snoring could be heard from the person. Drool slithered out of their mouth and onto their pillow and onto their hair. To an onlooker, this person probably looked like a hot mess. However, this was the most restful that Angel had ever gotten in a long time.

An incredibly loud snore jolted Angel awake with a start. "AH! WHO'S THERE?!" Angel sat up quickly and looked around, worried. He slipped out of his bed, grabbing the closest blunt object that he could grab. It happened to be a hairbrush. "C-Come out wherever you are! I know you're there!" Angel suddenly looked at the door to his closet, which hung open slightly. His eyes closed themselves a little bit as he inched closer to the door. He gripped the hairbrush with a little more force as one of his hands reached for the door. He waited a moment, gripping the hairbrush as hard as he could. He quickly opened the door and swung the hairbrush with closed eyes. Angel felt the hairbrush connect with something and he opened his eyes. However, this was a mistake. As Angel had swung, he hit the bar that his clothes were hanging on. It broke under the force of the blow and all of his clothes came tumbling down on top of him. Angel let out a small cry as the clothes fell on top of him. Angel sighed and frowned a little as he did this. "Well... At least there was nobody in here..." After Angel crawled out of the pile of clothing, he was about to go back to bed. His alarm clock was next to his bed and he noticed it out of the corner of his eye as he was getting into bed. As he noticed this, his eyes suddenly grew wide. "OH CRAP OH CRAP OH CRAP OH CRAP OH CRAP!" Angel suddenly rushed into his bathroom and started the water for a shower. It was time for him to meet Rin for the new job that they were going to do.

Needless to say, Angel looked a bit disheveled when they arrived at the spot where they were meeting Rin. Angel wore a dandelion yellow jumpsuit made from polyester as they arrived into the guild hall. Angel was breathing heavily as they arrived with a dress in their hand. Angel spotted Rin inside the guild hall and came up to her. He said, huffing the whole time, "S-Sorry to... Keep you wa... Waiting. I, uh... I woke up... Late. H-Hope... You didn't wa... Wait too long." Angel sat down for a moment to catch their breath.

Quietly munching on one of the snacks that she had packed in her bag, Rin continued to wait in her guild hall. "Rin, dear. Didn't you pack those snacks for the road?" Lily asked, looking on as Rin continued to stuff her face. "I eaht when Ih'm nerfous" she mumbled, her mouth still full. She had begun to get anxious as she waited for her friend. Was he not going to show up? Or did something happen to him? She didn't know, but thinking about it made her even more concerned. "Rin Sekai Mayou! You know that speaking with your mouth full is incredibly rude!" Lily scoffed, turning her nose up at her companion. "S-Sorry!" Rin grumbled, folding up the bag of snacks she was just eating and putting them back in her bag.

Suddenly, she saw a bright flash of yellow through the corner of her eye. A bit startled, she whipped her head upwards, her pink hair flying as she did so. In front of her stood Angel, looking extremely exhausted and a bit shaken. Even so, he had an amazing sense of style, as always. "A-Angel! I wasn't waiting too long! Are you okay?! Did someone hurt you?! I'll get them!" Rin rambled anxiously, grabbing her tablet and beginning to stomp towards the door. Lily grabbed her shirt and pulled her back, shaking her head. "Rin! Calm down! You should probably ask Miss Angel what happened before you make assumptions!" the bunny-cat cried. Looking at Angel bashfully, she knew that her pet was right, except for the fact that her friend was a "miss." Lily really didn't know any better, considering she was a bunny-cat after all, but Rin could tell by Angel's physique that he wasn't a female. Unless they were flat, like Rin was. Rin grumbled to herself, a bit frustrated by her own build, and a bit jealous that Angel could pull off such a beautiful outfit much better than she could.

Shaking off the thought, she smiled to her friend, excited that he had finally arrived. "Do you need a glass of water? Or some rest? We can sit down for a while if you'd like!" Rin asked gently, sitting herself down and patting the spot next to her. "Also, what a lovely dress you have there! What's it for?" she continued, a sparkle of curiosity in her eyes.
coded by benetnasch of THQ

As Angel arrived, he was huffing and puffing a little bit. Although he wasn't moving anymore, so that was helping his breathing significantly. However, Rin seemed to misunderstand exactly what it was that was happening to Angel though. She seemed to assume that there were some people after him, but that was most certainly not the case. As she got up to try and go after them, Angel didn't have enough energy to get in front of her and stop her. Thankfully, her pet had stopped her. Angel probably would've laughed at this were he not very tired, but he needed to sit down. Right as he though this though, Rin smiled at him and asked him if he needed water or to sit down. Without responding, Angel set himself on a chair and his breathing began to not to be so labored. A slightly quiet response came from him. "Um... If you wouldn't be too troubled, I think a glass of water would be nice."

The dress that Angel carried was slung onto his lap as he sat in the chair. Rin seemed to ask about the dress and Angel realized that it was probably a little curious as to why he was wearing one outfit, but was carrying another. Angel suddenly knew that changing clothes just to run faster or do more things with magic was not normal. Angel looked at Rin and said, "Oh. Uh... This dress is for me. I, uh, get different benefits when I wear different fabrics, so I grabbed a dress made from silk. Silk happens to be something to increase my overall magical power. I figured that I'd be using a lot of magic to help you out, so that's why I grabbed it. The reason why I wore this jumpsuit is because its made of polyester. Polyester increases my overall speed. Uh... A-And one of my spells will let me make a dress for you to get some of the benefits I get from the materials I get benefits from. Actually, this is a good opportunity for me to ask. Do you deal a lot of damage with your spells? Because... Uh... I don't..."