Amaterasu was the last person in the universe to join a guild in the vast majority of circumstances. In fact, she was not certain why her legs brought her to this place full of people called Magnolia, home of a guild known as Fairy Tail. Why? Void spent tens of thousands of years on this plane of existence without doing anything remotely akin to this. The simple answer that could be given was... she was bored. Very, very bored. So exceedingly bored that she was willing to control her powers and take on a more modern form in order to blend in. The woman also had to adopt a few human quirks in order to make her seem a little more normal, such as body language and using facial expressions.

Re: A social experiment. [Introduction - Open] 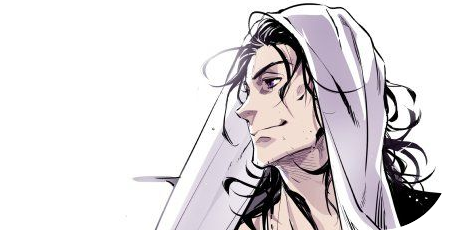 The atmosphere was bright with sunshine and cerulean skies, fluffy white clouds floating aimlessly. It was what many would consider a normal Magnolia Town day, and like those fluffy clouds, a puff of smoke had escaped Ezra's mouth. The end of the cigarette hung from his lips, a trail of an ash-like grey rising from the other end and into the atmosphere, vanishing beyond the naked eye.

Unlike his days in youth, Ezra had spent most of his time lazing about or doing paperwork. It was a peaceful lifestyle, but dreadfully boring. The extent of excitement he'd have came from the zeal of alcohol or doing some physical work himself, but it would seem that only one of those things were regularly available for the large muscled man.

Ezra plucked his reading glasses from his face, folded them, and hung them from the collar of his white tank top as he made way from his office to the main hall. This hall was perhaps the busiest of any other space in the building, where all the clients met with one of the wizards, or where the wizards did other work. It was on the other floors where one would find private offices reserved for more authoritative figures, such as Sorano, their Guildmaster, or one of the aces. But unlike those floors, the main hall had a sacred facility that no other could replicate! A bar!

With a shock of messy, black hair, Ezra boringly ran his large digits through the threads as he approached the bar. His violet hues drooped wearily, taking a seat only a space away from another. He sighed, raising a hand to the barista who would dry glasses in silence, "Howdy do. Can you get me the usual?" Ezra would request, eyes flicking over to the stranger who he had sat next to. He eyed her carefully, not recognizing her scent nor her face. A completely unfamiliar person seemed to have waltzed into the building, and Ezra had known just about everyone. A new recruit, perhaps? Ezra had found it compelling to ask. "Haven't seen you 'round here before. You new, lassie?" he grinned toothily.