It was roughly around noon within the city of Rose Garden, sunlight reflecting brightly against pretty much every building. However, this story didn't start in the currently sun-ravaged town, but rather the sanctuary of one of many shops lining its street. 'Rose Pet And Supplies' was a place many people within Black Rose knew about and Jiyu knew she was not the only one who frequented the store, as pets were rather common within the guild. Plus? Some member's of the guild were animals, demonic or otherwise, themselves and thus required personal care supplies that were not provided in normal stores meant for humans, so it was a useful place. Jiyu herself was one of the 'special' members born with a demonic canine for her mother half of her was dog and as time had gone on that canine half had had only invaded the rest of her, to the point there was no sense in calling her anything near human even if she walked around looking like one most of the time. Being canine had a very exact set of problems that came with it especially living the way she did, rather it was flea's, fur holding sweat and dirt better than hair, fur requiring a different brush then hair, the risk of worms, being unable to use most medications created for humans, Jiyu had to frequent this store for her own health not to mention Makoto and Frostine.

Today the Ace was lucky to not be venturing into the store for anything like flea shampoo or heartworm medicine which was disgusting. On this day, it was a very casual trip for things like restocking her special dog shampoo, getting some special treats and such, she'd never claim she hadn't just grabbed another squeaky toy and chewy toy for herself. With her shopping mostly finished she headed towards the counter to check out so she could head back for the day. It was on the way towards the front when her sensitive hearing caught the old shopkeep arguing with someone again, from the sounds of it someone had come up a bit short again, she was not too concerned at first. Of course, the nonchalant way in which she regarded what she had heard near instantly changed when she noticed it was one of Black Rose standing at his counter. "Hey old man." her voice broke through his ranting about young people having no responsibility or something or the like, the worn gaze of the man rising to meet her and seeming to become a bit happier. Clearly, considering how good they were for business when he recognized one of the towns local guild, the shopkeeper was very happy to see them. "Just put whatever he's getting on me. You already know I'm beyond good for it, and you should keep in mind for the future, he's also part of Black Rose." she spoke as she set her items down beside whatever items he may have had on the counter. Once she had said her peace? The old man was swift to finish checking them out. "This one's on the house Jiyu." after the keep handed over her bagged items, he also handed her a large rawhide bone from behind the counter, earning what seemed like a thankful giggle from the woman. 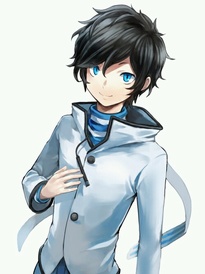 Re: The Dog Goes Bork;; Private.

It was noon at Rose Garden, when Stelar who is on his lunch break is wandering around the shopping area, he looked left and right seeemingly searching for something. It was not long after that, that Stelar finally stopped and stood in front of a store. Rose Pet & Supplies was written on the Shop Sign. Today, Stelar had resolved himself to finally buy a pet. Originally he didn't mean to buy pet, but now that he's a Magician, he's bound to do jobs wheter it's with people or alone. So he feels like it will be too lonely for him to head out on his own. At least, when he had a pet with him it will be a less lonely trip for him. Besides the people of the guild have their own pets, so he would also not become the weird one being all alone without pet if he were to buy a pet now.

He then took a deep breath, before he finally opened the store door. What he sees there is that there's a lot of pets lined up in cages ranging from smaller pet to bigger pet. There's also a lot of stuffs besides pet like pet foods, and a lot varieties of goods that accomodate pet needs. The condition of store is not that crowded, there's an old man that's watching the counter while there's some kids that is looking around the shop for pets. Stelar observed for his surroundings searching for a pet that might suits him. It was at this moment that his blue eyes locked into a certain cage. He hurriedly approached the cage to look at what he had seen earlier, what he sees there is a ball of white fur that is sleeping adorably inside of the cage. Stelar eagerly observed the creature inside the cage and the creature in question, maybe feeling a gaze to them, starts wiggling and revealing their true form. It appears what Stelar had seen is the clumped tail of the creature, that's why it looks like a round ball, but in truth, when the creature heads peeks from the side, it revealed a cute white fox's head.

The face of the adorable white fox that is staring at him right now is enough to buy Stelar's heart that he immediately picked up the cage and brings it to the counter. "Mister! I want to buy this cute little thing!" his smile is so cheerful like a kid that has found a treasure. "Sure ... that will cost you ..." the old man on the counter seems to calculate something before he showed a piece of paper with the pet's price written on it. Stelar's expression froze when he looked at the paper, he instinctively grabbed his pouch and take a look inside of his pouch immediately. His face turned paler when he take a look at his pouch, it seems that he has nowhere enough jewels to buy that pet. "Uh ... is there no discount for first time buyer or something like that?" he was determined to get this pet, so he tried his last resort, haggling. The old man clearly displeased at what Stelar is trying to do started to argue with Stelar. "Look here young man! I am running a bussiness here, not charity! If you got no jewels then you can't buy it! This is the problem with young people these days-" the old shopkeeper started to rant endlessly.

It would seem like his rant is going to continue for a while, but before that can happen, a voice called out to the old shopkeeper from the sides. Stelar looked towards the voice's source and there's a blue haired girl carrying a bag of pet supplies standing there. She walked towards the old shopkeeper and clearly this shopkeeper knows this girl, as his displeased face suddenly turned into a happy one when he sees her. She seems to have come to sort out Stelar's problem by putting it on her tab. Stelar could have been mistaken but he seems to recognize this blue haired girl, this girl looks like one of the waitress on the Silver Moon Inn. Stelar seems to be not completely wrong, she mentioned that Stelar is also the member of Black Rose, so should be one of the people that is working for Black Rose Guild, maybe this beautiful girl is really the waitress from the Silver Moon Inn? The shopkeeper seems to be happy throughout the conversation with the blue haired girl. "So the Black Rose influence can be used for things like this too ..." he muttered to himself, before realizing that he girl had already finished with her shopping, and just now walked past him, instructing him to come back with her.

"Y-yes!" dumbfounded that he suddenly got told to come back with her. He immediately opened the cage of the white fox and let the creature out of the cage. The white fox that had just gained it's freedom, immediately jumped towards Stelar and climbed it's way towards his jacket's unused hood, and made that hood it's new home as it curled inside of it and continues to sleep there. Seeing that this white fox seems to like him too, Stelar hurredly chases after the blue haired girl, that had just left the shop. After he finally caught up with the blue haired girl, he slowed his walking pace so now he had walked side by side with the blue haired girl. "Thanks for your help earlier!" a warm smile can be seen on his face. "You said that you don't need me to pay you back right? I can't accept that, at the very least let me carry your luggage." Stelar's finger pointed at the luggage that the blue haired girl had been carrying and offered to carry it instead, since he pretty much didnt carry anything, except the white fox that is currently sleeping on his jacket's hood right now. "By the way, My name is Stelar Everglades! You might have seen me around doing errands for the Silver Moon Inn, but now I am joining the Black Rose as a mage!" lastly he introduced himself towards the girl with a friendly smile on his face.

Re: The Dog Goes Bork;; Private.

Jiyu took a good few moments to look at the rawhide bone she had been given by the store owner, very content with the look and size of it. Even if the man was an old bat? He sure knew how to pick his merchandise and he was even better at selecting gifts! The mage could not wait to sink her sharp canines into that long slender shaft, oh wait it was a solid cylinder, shafts were hallowed even if some were firm and most were not meant to be chewed on. Reflection was broken by the sound of footsteps remind her once more that she was not alone at the moment. Was it a good idea to sharpen her teeth right next to the new recruit? Likely not, she could wait for a little while.

"We do have a considerable deal of influence, yes, but don't go abusing it, alright kid?" the female made the comment her elfin ears twitching slightly as she finally decided to tear her gaze away from the bone. Apparently, this kid had a good work ethic at least, he couldn't seem to stand the idea of getting the fox for free and this sparked an idea within her head, but if she enacted it would still be seen. "If you're sure, go ahead, just don't drop it please, the treats and stuff would be fine but the shampoo and conditioner are very expensive." she paused walking a second holding the bag out to see if he would still take it, finally getting to sneak a glimpse of what he had chosen to buy, what animal she had paid for.