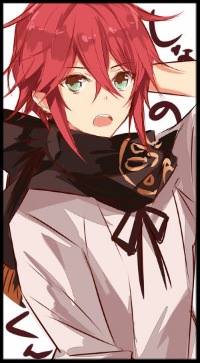 Haru stood in front of a lady who appeared to be going out of town with her husband...or lover. Because he didn't see a ring on the man's ringer...yet saw one on hers. Was she having an affair? Or cheating on her husband...Haru gulped to himself as she handed him a long list of chores to do. With a sigh he would take the list and read it.

"Buck up young man, when I was your age I didn't have magic and I did plenty of work!"

"I'm a fire mage...I can't use it to help me clean....sir." Haru said shooting him a look. The man looked kind of offended that a kid had such a mouth but then burst out laughing and walked to the horse and cab waiting to pick them up.

"Now Haru, take your time ok? Don't rush and be careful...the neighbors dog loves to break in." she said with a scowl towards the neighbors house.

"Yes ma'm." he said with a nod as he re-read the list. She would kiss him on the cheek, making him blush a little as she left with a trot. He went back to reading, and knew that he would easily be able to knock out this list. His mother had made him clean places that.....he didn't want to remember.

Hours past, as he mopped, swept, and dusted everywhere. Hera had trained him well in the art of cleaning as comically Haru would appear anime style in different areas of the house cleaning. Eventually he was done, crossing his arms pridefully he would smirk.

"Child's play!" he even sparkled a bit with his arms crossed. A trait from his grandfather that apparently had passed down to him. It was then he heard a bang at the back door. Then he saw him...some giant damn dog with all white fur. Licking the glass of the back door and barking loudly. He then began rummaging through the owners gardens and sniffing and pissing on everything. "HEY GET OUT OF HERE!" he yelled as he leaped through the back door after opening it. The dog began to growl at him and move closer. With a sweatdrop above his head now, Haru would try to 'shoo' him a few more times. "You brought this on yourself, Frank!!!" as he said that he balled up a fist as it ignited in flames that seemed to roar like a dragon. "FIRE DRAGONS---!" the dog ran away. Hoping through a hole in the hedge bushes back into his yard.

"THAT'S RIGHT! HARU FEARS NO HOUND!!! HAHAHA!" proud of himself, he marched back into the house and plopped right onto the couch. Falling asleep watching their Netflix and only being awoken by them arriving to a perfectly clean house.

"WOW! Haru...it looks amazing in here!" she looked around. He noticed her date wasn't with her anymore. IT WAS A ONE NIGHT STAND! "Smells wonderful too!"[/color] she then reached into her purse and pulled out way to much money. Giving it to him, he would thank her trying to be cool about having this much money. His first official job as a mage. His first opponent. A dog named Frank. Oh how this would one day become legend.
« View previous topic · View next topic »