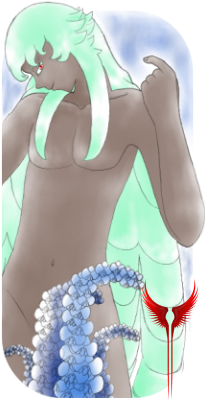 Haraka sipped on his warm drink a bit as he walked to the line. The demon had come here early in the morning in hopes that it would mean there would be no line, but there it was. He supposed it made sense, as traveling sounded very nice to many. Also, there was a common thought that coming early would men waiting less time. It was a bit boring waiting in the line, but he had the comfort in knowing that the same line would have probably been longer if he had come later in the day. The line inched through people bit by bit, causing him to get closer and closer to his destination. People stood behind him now in the line, not just ahead. Sometimes it felt like people behind him where trying to push and squeeze past him to get ahead, but that was silly. Well he thought it was silly, until he heard the woman behind him speak. Well, isn't she a bit impatient? But everyone had to wait just the same, she was no different than everyone else there. Did she think vulgar words would move him? Maybe. Some people thought that if they poked and talked down at the quiet and calm that they would be pushed away easily like soft butter. At the least it would be nice if she remembered that the other she was pushing at in line was a person with places to be at too.

She wasn't the only person who rather be somewhere else. It would have been nice if he could have eaten breakfast at home instead of waking up super early and not having the time to eat. Life just wasn't the same if you only have time to shower and get dressed in the dark morning just so you can get to a far away location in the early morning. How far did this woman trying to harass him for his spot in line really have to go to even get here? Well, maybe she did go far to get here, but somehow he didn't think she had the patience for that. From all the talking she had been doing behind him, the place that she was in such a rush to get to... was to go to a restaurant for breakfast. There were no dire matters, no emergency, it didn't even seem like she was even planning on using it today. Was this what youths have become in this age? Omaras certainly hoped that was not the case. In any case, her very presence made the waiting feel twice as long, though at least he knew it only felt that way. The closer he got to the front, the more her hands and grip dug at him, along with her words. The man didn't take it too seriously, that is until he was almost at the front of the line. He heard a ripping sound, before seeing his vest fall to the ground.

He was positive that this was accidental, seeing as she became dead silent after that. The man sighed, briefly leaning down to grab its remains. It only took a bit to retrieve its remains from the ground, but she used that small time to squeeze ahead of him. This was upsetting, but what was done was done. The white vest was dead, but at least it would be easy to replace. At least there would be no mess of fabric left on the street. It felt like a joyous event when his time came. Maybe he could get home in time for lunch. The person at the front had a pen out, fixing their glasses a bit before moving a few papers around.
"Name?"
"Haraka Omaras."
"Age?"
"Uh... 6,803 years."
"Date of birth?"
"...Really?"
"Sir."
"Sorry. February 13th."
"Here you go and have a nice day."
Just like that, he now had a passport. This would be good if he had to travel by official means, rather than the far less official means used before ever joining his current guild. Well, now it was time to start heading home...