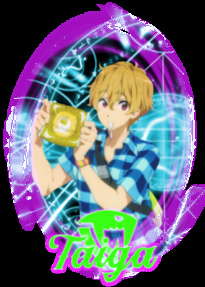 Taehyung had spent the last two days in Clover Town, mostly looking around and exploring. During his time in the two he had been hearing general conversations from the residence, mentioning how two creatures seem to be causing a lot of havoc with the train timetable. At first, the boy didn't think much of it but when he had finally decided to leave the small town and made his way over to the train station, he found a large group of people crowded on the platform. When he approached, it was evident that these people were quite angry and arguing among themselves. Someone pee in the town's water supply? Adramelech asked as Tae made his way closer to the crowd. He stood to the back of the crowd, standing on the tips of his toes in order to see over the people to see what was going on. At the front of the crowd was a single, sweating and shaking conductor from the station who was clearly uncomfortable with his current predicament. "I-I know you are all angry and believe me when I say that I completely understand and you have every right to be. Unfortunately, at this current time I am unable to do anything until I hear from one of the guilds." Several people within the crowd started yelling more angrily which caused the conductor to flinch and even Taehyung too.

Taehyung turned to his right and found a young woman standing only a few inches apart from where he was standing and lightly tugged on her shirt sleeve to get her attention. "Excuse me miss, but what is going on?" The woman turned back to Taehyung with a concerning look upon her face. "All trains to and from this station have been canceled because a couple of beasts barricaded the tracks with trees. A lot of people aren't from here and can't get home, me included. I left my daughter at home with the babysitter and now they are telling us that issue won't be cleared up until tomorrow unless one of the guilds takes on the request to remove it." After listening to the woman's words, Tae took a step back as if readying himself to leave the platform. What are you doing? The demon asked curiously. "I'm leaving..." The boy responded, not quite understanding why the demon would ask. You don't think we could do that job for some cash? It is a request so that means they are paying for someone from a guild to remove the tree. Lets do it, the sooner the better because I want to get back to the guild hall. Generally, gods were not supposed to get involved with mortals unless it were a dire enough situation. Understandable, but generally, Atlas doesn't enjoy following all of the thousands of guidelines that have been set in place for him. After all, how can even get people to follow him as a god when he doesn't talk to them. Granted, his presence should be enough but you never know with people nowadays. Always doing weird things or being weird. Like a couple of weeks ago, he met a human with two souls inside his body. That was weird in his own right. Then again, having a God's soul in your body isn't exactly normal either. But, Atlas isn't human. Well, at least not entirely. But he is supposed to abnormal anyways. Today, the god had found himself in a place called Clover Town. There didn't seem to be any good bars, so it was already looking drab to be honest. Sighing, the god would walk by the train station to see a rather large crowd forming. He's usually supposed to be in his human form but today that feels like too much effort to manage. Atlas' body is covered by a light green glow as he transforms into his true appearance. The one he had before he inherited the God soul. It felt nice to be in again, as he stretched his arms. Jogging over to the station, he'd work his way to the front of the crowd, to see the train being completely empty.

He overheard a conversation and felt a familiar presence actually. Looking over to a woman and oh, it was Tae. Seeing him again made this a little bit more interesting as the god walked over to the pair talking. It seems there was monsters who were stopping the trains from leaving the station. Looking at Tae, he heard Adralemech's familiar growling tone as he prompted Tae to clear the monsters. That might motivate the young man a little bit but the fact remains that Tae would probably need a push from an outside force in order to get him to actually go and stop the monsters. Tapping the brunette on the shoulder's, Atlas' emerald green eyes would be trained onto the boy as he said, "Excuse me, sir. I can feel your magic potential from here. You wouldn't happen to be in a guild would you?" Smiling, Atlas would say, "I know mages when I see them and would be honoured if you'd like to assist me in clearing out all the beasts up ahead on the tracks." It'd be too boring if he just tried to jog Tae's memory, so he'd wait for Adralemech's reaction because that'd probably be funny to. "I'd really appreciate if you came along with me." With a smirk and his eyes narrowing somewhat, he'd look at Tae as he said "It'll probably just end up being me and you anyways though." Ah, it just slipped out. It just felt easy to tease someone who was basically completely innocent. No matter, Atlas would go back to his usually sunny demeanor as he waited for a reply.