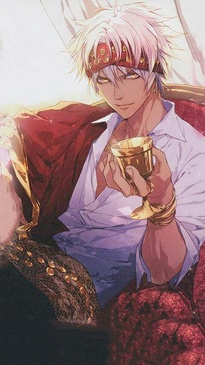 "This is going to be fun." Darius huffed.

The Desierto swordsman had found himself in a restaurant by Hargeon Port, on a mission to appease and strike a deal with a client who has been reported to be not only hard to deal with, but quite unlikeable as well. No doubt, Ruvel had sent Darius on this task because of the swordsman's tendency to be a "sarcastic asshole with a penchant for hitting on everything that moves". Gotta admit, as much as pretty boy seems like a sensitive kid, he reeeeaaally knows how to get back at me for being a prick, Darius thought.

The restaurant chosen for these talks was quite lavish, ornate drapes complemented each window while a large, beautiful chandelier hung at the center of the area. Each table had men and women dressed in gorgeous formal wear. Looking to impress, Darius also wore formal wear, a suit and a dress shirt with the signature WFTC sigil sown unto the chest.

At the sound of the door swinging open, Darius' eyes met with the man he was meant to see: a middle-aged, relatively short, pot-bellied man donning a bright blue suit. Darius waved the client over, and as the other man approached the mage, Darius stood up and stuck his hand out for a respectful handshake.

"Templeton Garland, I presume? It is a pleasure to meet you," Darius courteously smiled, attempting to put his best foot forward (as attempting to do otherwise would probably end with Johann's rapier up somewhere that Darius was not okay with), "I am Darius Al-Sayyid, I represent the West Fiore Trading Company. Please, take a seat."

Darius simply smiled at the backhanded remark, doing his best to keep his composure, "Have no worry, Mr. Garland, I assure you that the company would not send anything but the best."

Despite Darius' surprisingly polite words towards the less than polite client, his inner monologue was essentially shouting something...less savoury. What the FUCK did this walking blueberry call me? Green? GREEN? I swear to God if the VP didn't send me to talk him down, I would shove every fucking sword in my armoury up his stupid, pampered asshole.

Suffice to say, none of those words left his lips.

As the two men took their seats, Darius began with the talks, "Now that the pleasantries are out of the way, let's discuss negotiations."

"Look, the prospects of the Trading Company are wonderful...but..." Mr. Garland said in an almost unamused tone, "Utilising your company as the main source of transport for my cargo is expensive, you ask for too much...plus, I don't like that CEO of yours, Cirven, was it? There's something...off, about him,"

Darius took a deep breath, before reciting the main positives of working with the company,"Look, Mr. Garla-..."

"It's Sir Garland, that's the second time I've had to remind you."

"Right. Sir Garland." Darius' tone was steadily losing it's politeness, "I get it, using smaller trading companies ask for less money and you get more return payment, but the seas aren't getting sweeter. Pirates, and god knows what else can steal or destroy your cargo if you don't have the right protection, our protection."

"And all you ask for return is that ridiculous percentage of a stake, right?" Garland asked incredulously, "Signing on with your company makes me earn less, boy, did your superiors not tell you that before they sent you to speak to me? Honestly, if they think they can wow me with someone like you, then it's a wonder I even came here."

Darius bit down on his lip, trying his best to keep his composure, "Look, sir..."

However, the client had enough, "I'm sorry, boy, I'm beginning to realise there is no point in me being here, so I must g-"

"Templeton..." Darius spoke, the courteous tone in his voice vanishing before commanding the older gentleman, "Sit. Down."

"Excuse me?!" Sir Garland responded, astounded at the manner that this employee was speaking to him, "I will not be spoken to in such a-"

"Now." He snapped, the cadence in his voice silencing any debate, and causing Garland to sit down.

"Here is why you are going to accept our dealing, sir," The swordsman spoke, clearly holding the reins to this conversation, "You go to any other shipping companies, and you get your cut of the profit, a little more than what you'd get from us? Sure. But do these companies have ties to every single country in Earthland? Does...what's their name again? Oh right, the Bilson's Trading Company. Do they even hold a candle to the opportunities that the West Fiore Trading Company can? Come to think of it, do they even trade anywhere outside of Fiore?"

"I thought so, and, I can go up to any single damn one of your competitors and offer this same deal."

"Well, that's because we think you're so damn pretty, Templeton." Darius said sarcastically, before telling the truth, "That, and because you're big enough of a client to boost our profits as well. But, we own a damn island, and we make more than enough money without you so...the truth is, you need us, more than we need you."

Darius flashed his signature smirk, knowing where negotiations stood, "So, I'm going to pull what you tried to do earlier before, and leave. You know where to find us."

As the swordsman stood from his chair and walked away from the table, he heard a voice call out to him, "Wait."

The smirk transformed into a grin as Darius heard the words that he had wanted to hear all damn day.